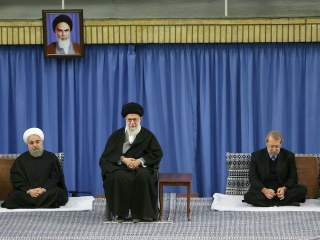 Iranians went to the ballot box last Friday to cast their votes for the Assembly of Experts and the Majles, Iran’s parliament. Reading the headlines in U.S. media, one might think reformists had won a landslide victory in both elections. It’s a narrative that could not be further from the truth. The pragmatic camp of President Hassan Rouhani lost the Assembly of Experts to hard-line revolutionaries, and the Majles race remains neck and neck. Moreover, the “reformists” touted as the winners are not reformist at all, even by the skewed standards of the Islamic Republic.

The eighty-eight-member Assembly of Experts, whose members serve for eight years, chooses and supervises the supreme leader. Given Supreme Leader Ali Khamenei’s poor health, the coming Assembly may well choose his successor and shape the Islamic Republic’s future over the next few decades.

The Majles, by comparison, is a much weaker institution, as all its bills must be approved by the Guardian Council—an institution charged with ensuring fidelity to the revolution whose members are chosen by the supreme leader and the head of the judiciary (whom the supreme leader appoints). As a result, the election for the Assembly was the more consequential of the two.

In January, the Guardian Council disqualified 80 percent of candidates to the Assembly, leaving just 1.8 candidates for every seat (similarly, it nixed half of all parliamentary candidates). The bulk of those disqualified were self-described reformists or moderates.

Still, if you believe the headlines, the disqualified reformists somehow rose from the dead and dominated the elections. The results, however, show that in the Assembly of Experts, the radicals won 75 percent of seats, while the rest were shared by independents and the pragmatic alliance led by Rouhani and ex-presidents Hashemi Rafsanjani and Mohammad Khatami.

As for the Majles, its fate will depend on three questions: Will the Guardian Council try to change the results of races where Rouhani’s allies won by a narrow margin? What will be the fate of the roughly one-fifth of seats for which no candidate got a majority, and which will be decided in a runoff election in April? How will independent members—making up another one-fifth of seats—ultimately caucus and vote?

Some of the confusion is understandable. After so many of their candidates were disqualified, the pragmatist camp chose to round out its list with radicals, in order to defeat a handful of ultra-hard-liners whom they view as their greatest threats. Their strategy failed in many places, but partially worked in Tehran, where they defeated Mohammad Yazdi, the current Assembly speaker and an archenemy of Rafsanjani.

When they struck that deal, the reformers and pragmatists knew they were dealing with hard-liners. Among the cross-listed hard-liners was Mohammad Ali Movahedi-Kermani, the supreme leader’s former representative to the Islamic Revolutionary Guard Corps, who has said explicitly that he is not a reformist, as well as Ghorbanali Dorri Najafabadi, a former intelligence minister responsible for a string of assassinations of intellectuals and dissidents in the 1990s. They also include Mohammad Reyshahri, another former intelligence minister who oversaw the murder of thousands of political prisoners in the 1980s, and Yousef Tabatabaei-Nejad, who has blasted opponents of the hijab as kuffar and encouraged violence against even women who show too much hair under their headscarves. All have one thing in common: they are known radicals, have no record of supporting “moderation” and reject the reformist label.

Even those candidates who ran exclusively for the pragmatic camp are far from “reformist” or “moderate” in any meaningful sense. For example, Kazem Jalali, who ran as a reformist in Tehran and won, has demanded harsh punishment for Mir Hossein Mousavi and Mehdi Karroubi, the now-jailed leaders of 2009’s pro-reform Green Movement. Jalali has been a hard-liner—or in the parlance of the Islamic Republic, a “principlist” committed to revolutionary principles—all his life, despite his supposed overnight conversion from radicalism to pragmatism.

The same is true of Behrouz Nemati, a hard-liner until one month ago, who accuses the United States of supporting the regime’s enemies in the 2009 post-election protests. In these elections, he ran as a reformist in Tehran and won. Another candidate, Mostafa Kavakebian, has described Israelis as “not human.”

Friday’s election was not a landslide victory for the pragmatists. They lost the Assembly of Experts with a wide margin, and just barely improved their position in the Majles. Labeling radicals as “moderates” or “reformists” does not make them so. As Wendy Sherman, the lead negotiator of last summer’s nuclear deal, noted this month, Iranians face a choice not between moderates and hard-liners, but hard-liners and “hard-hard-liners.” After this election, as before, the reins of power in the Islamic Republic will remain theirs.

Saeed Ghasseminejad is an associate fellow at the Foundation for Defense of Democracies and its Center on Sanctions and Illicit Finance.