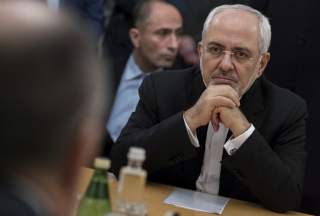 Jacob Heilbrunn, editor of the National Interest, spoke with Mohammad Javad Zarif, Iran’s foreign minister, in an interview in New York on Monday, April 23, 2018. The following is a lightly edited transcript.

Jacob Heilbrunn: President Trump has until May 12 to make a decision on the JCPOA (Joint Comprehensive Plan of Action). What happens if he does indeed announce that the U.S. is officially withdrawing?

Mohammad Javad Zarif: Well, you made a pertinent point: officially withdrawing. Because the United States, under President Trump, has really not been a part of the JCPOA, has violated almost every U.S. commitment under the JCPOA, so we’ve had almost sixteen months of a trial period for official withdrawal. If the United States officially withdraws from the JCPOA, the immediate implication would be that it would free Iran of any obligation to remain in the JCPOA. Whether that would lead Iran to immediately withdraw or not, that’s a decision that we will adopt, but that’s the most likely outcome of our response to President Trump

Jacob Heilbrunn: Would that also include withdrawing from the NPT (Non-Proliferation Treaty), potentially?

Mohammad Javad Zarif: Well, there are some people in Iran who are talking about that. That’s not, certainly, the government’s position. But we have very active public opinion and we have always been responsive to public opinion. But what I see in the cards as the first stage of our response to U.S. official withdrawal would be to contemplate also withdrawing from the JCPOA.

Jacob Heilbrunn: How do you think the Trump administration, or the United States, is actually in violation of the treaty?

Mohammad Javad Zarif: Well, every statement that President Trump has made since coming to office—before coming to office, he was a candidate, but since coming to office he’s become the president of the United States, head of the executive branch, and there are specific provisions that prohibit senior members of the executive branch of the United States from making statements against the JCPOA, from trying to undermine the provisions of the JCPOA, from talking to foreign leaders and foreign businesses to dissuade them from investing in Iran, and from other activity that would impede normal trade with Iran by others—not by the United States, by others. That’s in terms of the actions by President Trump himself.

The Treasury has failed to issue any license, for aircraft, for other activities that are authorized under the JCPOA, and the Office of Foreign Assets Control (OFAC) needs to issue licenses; it has failed to issue a single license since the inauguration of President Trump. So there are a number of technical violations, and even more serious violations, of the JCPOA by this administration, including the president and members of the administration, and various institutions of the U.S. executive branch.

Jacob Heilbrunn: Do you see President Trump as a crafty adversary, a bumbling fool, or someone who is simply ignorant of international relations?

And now, the parts of the agreement that President Trump is questioning are probably the most serious, the longest negotiations were over these parts, and the United States got some of what it wanted, did not get some of what it wanted. But instead of some parts that it wanted, got something else! I mean, it’s a process of give and take: in any negotiations, the two sides balance out what they’re getting and what they’re giving. And now the United States is saying, “What’s mine is mine, and what’s yours is negotiable. But whatever I gave you, now I want it back.” Who would, in their right mind, deal with the U.S. anymore? This is the impact of President Trump’s policies’ long-term impact on the United States.

Mohammad Javad Zarif: —he actually would love to renegotiate with Iran; the fact of the matter is that we already have an agreement, so you don’t renegotiate an agreement that you reached with the government of a sovereign country. And we have reached an agreement, not only with the United States, but with six other countries.

Jacob Heilbrunn: Is the lesson that you’re better off with a nuclear bomb, and then to negotiate with the U.S.?

Mohammad Javad Zarif: No, no, no. That may be the lesson that some people may draw, not the lesson that I would draw. But I believe that the attitude is sending a very wrong signal to the international community, particularly that you cannot trust the United States once you negotiate with it.

Jacob Heilbrunn: What is the implication for Iran domestically if the United States pulls out in May?

Mohammad Javad Zarif: I think it would increase our domestic unity. People will then have no reason to engage in the type of debate that we have engaged in over the past four years, over whether we should engage or not with the United States—because, then, the door is closed. And everybody will have basically the same approach.

Jacob Heilbrunn: There’s much discussion in the United States now about Iran’s posture in Syria, as well as in Lebanon. Is it possible for Iran to become a hegemon in the Middle East?

Mohammad Javad Zarif: It’s not possible for anybody to become a hegemon anywhere. Some people believe that following the end of the Cold War, the United States could entertain hegemonic aspirations globally. As President Trump has said, $7 trillion was spent, and the outcome is not anything that anybody would like. So hegemonic tendencies are delusional in today’s world; even governments in general have lost a monopoly over the use of force, we have nonstate actors emerging. So theoretically speaking—not in practice, even theoretically—hegemonic aspirations are more illusions than reality. Iran does not want to be a hegemon in the region, and we believe that the era of hegemonic tendencies is long past.

Jacob Heilbrunn: Then why is Israel making so much noise about Iran’s presence in Syria?

Mohammad Javad Zarif: They’ve always tried to find smokescreens to justify their aggressions—their violations of the rights of Palestinians, as well as sometimes the need to cover some domestic problems.

Jacob Heilbrunn: As a final question: the Trump administration’s objections to the Iran deal, are they simply a pretext for then launching an actual attack on Iran?

Mohammad Javad Zarif: I doubt it.