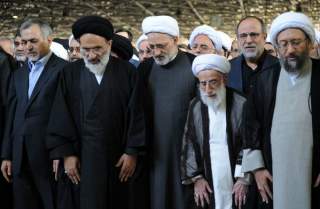 The Islamic State rages next door and the U.S. Congress is threatening new sanctions, but Iranian officials remain preoccupied by a different challenge, one that has haunted them for decades: “American Islam.”

“American Islam” isn’t the Islam practiced by Muslims across the United States. Rather, it is what the Islamic Republic perceives to be a depoliticized perversion of the true faith, devoid of the revolutionary sentiment that guides the Islamic Republic. As Supreme Leader Ayatollah Seyyed Ali Khamenei lamented in 2010, “American Islam means ceremonial Islam, an Islam that is indifferent in the face of oppression.”

Over the three decades since the Islamic Revolution, Iranian officials have applied the term to Muslim nations deemed pliant before the will of superpowers like the United States. To combat this alleged deviation, the regime has revived a term favored by fundamentalists across the Muslim world: “the pure Islam of Mohammad.”

A newly published book, The Struggle of Two Islams, brings this political and religious dichotomy to the fore. The book is derived from Volume 21 of Sahifeh-ye Imam, a collection of sayings from the founding father of the Islamic Republic, Ayatollah Ruhollah Khomeini. The Struggle of Two Islams aims to vindicate the regime’s worldview, thus reaffirming its place as a champion of “pure Islam.”

As early as 1979, a young Khamenei served as interim Friday prayer leader for the city of Tehran. In an address mourning the assassination of the cleric Ayatollah Morteza Motahhari, Khamenei praised “his procession along the original and accurate path of Islam,” adding, “Our enemies have proven to us that they are against Islam.”

Soon, the Islamic Republic conflated its own enemies with those of God. During the 1980-1988 Iran-Iraq War, Khomeini would proclaim that “this war is a war against Islam…and God almighty will not forgive those who arise against Islam.” Khomeini reserved even greater disdain for Saudi Arabia (which had backed Iraq in the war), which he derided as “bloodthirsty,” and its Wahhabi religious institutions as promoting the same dreaded “American Islam.”

The rhetoric continued after Khomeini’s death in 1989. In 1990, a noted Azeri-Iranian Ayatollah sought to promulgate Iran’s brand of Islam in Azerbaijan, saying “if those people who seek Islam are not given it by healthy hands, then they will be given American Islam. That is to say, they will be fed a distorted Islam.” The next year, Khomeini’s successor Khamenei set the tone of Iran’s foreign and security policy for decades to come, warning, “The danger of American Islam … is not less than the danger of America’s military and political tools.”

It’s hard to find any Muslim polity or group that is spared Tehran’s barbs. Publications have scorned Turkey’s Islamist-leaning government as “the other side of American Islam’s coin,” while the Taliban and Al Qaeda are rightly deemed expressions of Islam’s modern “mutilation.” To counter these perceived perversions, Hojjat al-Eslam Ali Saeedi, Khamenei’s representative to the Islamic Revolutionary Guard Corps (IRGC), has extolled Iran’s destiny as “the introduction of Mohammad’s pure Islam to the world.”

Today, the tug of war continues. In a 2012 debate with Ebrahim Asgharzadeh (a hostage-taker in the 1979 U.S. Embassy siege who later embraced reformism), Hossein Shariatmadari, the editor of the hardline Kayhan newspaper and a confidant of Khamenei, insisted: “We are in conflict because of our identities. This conflict will only be ended on two accounts. Either we abandon pure Islam in governance, meaning an Islam that contests oppression…or America abandons its arrogant temper.”

As Mohammad Javad Zarif, Iran’s foreign minister and lead nuclear negotiator, wrote in his memoirs, “I believe that we do not exist without our revolutionary goals.” Zarif, who speaks fluent English and has a PhD from an American university, may not appear to embody the civilizational discourse we hear from Iran’s most hardline clerical and military leaders. Nevertheless, his thesis remains the same: “We have a fundamental problem with the West and especially with America…This is because we are claimants of a mission, which has a global dimension.”

The Islamic Republic’s vision of a worldwide civilizational conflict—and equally important, within Islam itself—helps explain the diplomatic failures of the past and pitfalls of the future. Looking ahead, Western negotiators must recognize that even in the unlikely event of a comprehensive nuclear accord, Iran continues to pursue its theological objective to combat “American Islam,” and further promulgate its existential, zero-sum worldview.