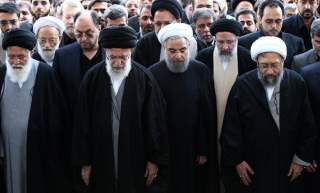 Two important developments in Iran have finally brought into open a simmering issue that has divided the Iranian leadership since at least 2011. First, Iran’s Foreign Minister Mohammad Javad Zarif fired Hossein Amir-Abdollahian, his deputy for Arab and African Affairs. Amir-Abdollahian had led Iran’s diplomatic efforts to resolve the crisis in Syria. Less than a day later, on Monday, June 20, Maj. Gen. Qassem Soleimani, the commander of Iran’s Quds Force, issued an angry and blunt statement in which he threatened Bahrain’s rulers, declaring that they would pay a heavy price for their decision to revoke citizenship of Sheikh Isa Qassim, the spiritual leader of Bahrain’s Shia majority.

The two seemingly unrelated developments are actually tightly linked. They represent another manifestation of the fierce power struggle in Iran between President Hassan Rouhani and his reformist and moderate supporters, and the hard-liners led by the high command of the IRGC and Supreme Leader Ayatollah Ali Khamenei. More importantly, however, they also bring to light a deepening rift in the Islamic Republic’s leadership over Syria’s fate and, more specifically, that of President Bashar al-Assad.

The image presented in the West about Iran’s intervention in Syria and its support for Assad’s government is that, despite many fissures over domestic issues, the Iranian leadership is completely unified when it comes to Iran’s strategic interests in the region, in particular Syria and Lebanese Hezbollah. This is in fact far from reality. Similar to almost all other issues, there has always been a rift between the moderates and reformists on the one hand, and the hard-liners on the other.

Although there had been widespread speculations, both in Iran and in the Arab newspapers, about the possibility of Zarif removing Amir-Abdollahian from his post, his firing still provoked angry reaction by the hard-line websites and mass media, shedding further light on the rift in the Iranian leadership. Calling him a “revolutionary diplomat,” Mashregh, a website controlled by the IRGC, declared that Amir-Abdollahian was the embodiment of “Islamic Revolution diplomacy.” Alaeddin Boroujerdi, the hard-line head of the parliamentary committee on national security and foreign policy, expressed his displeasure over the firing. The branches of the Basij militia in six universities in Tehran, the paramilitary group controlled by the IRGC, issued a statement accusing Zarif of yielding to pressure by the Arab countries and the United States for firing Amir-Abdollahian. Zarif rejected the accusation and the link.

The statement by General Soleimani on Bahrain, a country outside his “sphere of influence” in the Middle East, must at least be seen partly as a reaction of the IRGC to firing of Amir-Abdollahian. An Iraq expert, he is close to the IRGC and the Quds force, and was deputy to Iran’s ambassador to that country from 1997–2001, deputy to Iran’s special envoy for Iraqi affairs from 2003–05 at the height that country’s invasion by the United States, as well as director of a special Iraq department at Iran’s foreign ministry from 2005–07 and special assistant to the foreign minister for Iraqi affairs from 2003–06. During that period, Iran’s ambassador to Iraq was Hassan Kazemi-Qomi, an IRGC and Quds Force officer with whom Amir-Abdollahian worked closely. His close connection with the hard-liners is manifested by the fact that, while during the Rouhani administration’s time in office Zarif and his chief deputy Abbas Araghchi have been criticized savagely by the hard-liners, they never criticized Amir-Abdollahian even once.

Similar to all the hard-liners, Amir-Abdollahian is blunt and confrontational. Arab diplomats had reportedly complained about Amir-Abdollahian’s “undiplomatic” tone in diplomatic encounters. There is wide speculation in Tehran that Amir-Abdollahian’s firing is another signal to the Arab nations of the Middle East that the Rouhani administration is prepared to improve Iran’s relations with them.

Responding to the IRGC criticisms of Amir-Abdollahian’s firing, Rouhani said sarcastically that “Unfortunately, some who never were in a war or the [1979] revolution talk about the nation and the revolution that surprises the people. If we want to chant slogans, we should not do so at people’s expense.” It should also be noted that while General Soleimani condemned revoking citizenship of Sheikh Qassim, his comrade-in-arms, the Basij commander Brig. Gen. Mohammad Reza Naghdi has suggested revoking citizenship of the leaders of Iran’s Green Movement—former prime minister Mir Hossein Mousavi, his wife Dr. Zahra Rahnavard and former speaker of the Majles Mehdi Karroubi.

The rift over Syria has been simmering just below the surface ever since the war began there in 2011. Iran’s hard-liners urged President Assad to react strongly and crack down hard on the opposition, violently if necessary, to put down the “uprising.” The IRGC had done the same to the nonviolent and democratic Green Movement in Iran during 2009–10, and thus recommended the same to the Assad government. On the other hand, Iran’s reformists and moderates, a large majority of whom had supported the Green Movement, have urged caution on the support that the Islamic Republic is providing to Syria.

Thus, the rift in Iran’s power hierarchy over Syria is tied to the fate of President Assad. The hard-liners have insisted on supporting Assad to the end, giving him billions of dollars in aid, and sending to Syria military advisers, Lebanese Hezbollah forces, and non-Iranian Shiite militia recruited, trained and armed by the IRGC. At the same time, hard-line leaders made it clear that they want Assad to stay in power, because they believe that if he is removed, Syria—or at least the part that is of strategic importance to Iran, namely the Alawite heartland by the Mediterranean coast, Latakia, Tartus, and the west of the country that borders Lebanon and Israel—will fall into the hands of radical Sunni forces that are hostile to Iran. That would result not only in loss of Syria, but also in great weakening of Hezbollah, which Iranian hard-liners consider their first line of defense against Israel.

Despite the calls by President Obama and other Western leaders for President Assad to leave power, Iran’s hard-liners have continued offering him public support. Maj. Gen. Hassan Firouzabadi, chief of staff of Iran’s armed forces, said in May that “Assad will remain in power.” Amir-Abdollahian himself said many times that Assad will remain in office, until the Syrian people vote him out, and that Iran will not agree to a fixed period at the end of which Assad must be out of power. It was General Soleimani who traveled to Moscow in July 2015 to warn President Vladimir Putin that unless Russia intervenes militarily, Assad’s regime will collapse soon. Khamenei has said repeatedly that the war in Syria is in fact a war against Iran, and thus it is a war for Iran’s national security.

But the reformists and moderates have also expressed their opposition to the policy that ties Iran to Assad’s fate. They have been arguing that while it is of strategic importance to prevent Syria from falling into the hands of radical Sunni groups backed by Turkey, Saudi Arabia and their Arab allies in the Gulf, it is not prudent to insist on Assad remaining in office after a long and brutal war that has killed hundreds of thousands of people.

In a meeting with a group of people from province of Isfahan [in central Iran] in September 2013, Rafsanjani criticized the Syrian government harshly, saying, “The Syrian people have suffered much during the past two years. More than 100,000 have been killed [to date] and seven to eight million have been displaced. Prisons are overflowing with people and they [the Syrian government] have even turned stadiums into prisons. The [Syrian] people have suffered chemical attacks by their own government, and now they have to wait for U.S. bombs”—a reference to President Obama’s threat to attack Syrian forces, if it was proven that the government had used chemical weapons. Rafsanjani’s remarks provoked angry reactions from the hard-liners. He denied making the comments, but it was clear that his denial was not genuine.

Ever since Rafsanjani’s remarks, Iranian reformists and moderates have found ways to express their disagreement with the hard-liners. For example, given that Russia is the main military backer of the Assad regime, and the fact that Putin and Khamenei have close relations, the reformists and moderates harshly criticize Russia and Putin as a way of demonstrating their opposition to the hard-liners’ policy toward Assad. Kaleme, a reformist website that used to be close to Mousavi, continuously criticizes Russia, its policy toward Syria and the IRGC operations there. Mousavi, Rahnavard and Karroubi have been under strict house arrest since February 2011, and therefore it is not clear whether Kaleme expresses Mousavi’s views. Other websites and publications that support the reformists and moderates do likewise.

As the IRGC’s and the Quds Force’s casualties in Syria rise, the reformists and moderates have made their voice louder. Two weeks ago, Majid Ansari, Rouhani’s vice president for parliamentary affairs, strongly criticized the hard-liners. They have been accusing the Rouhani administration of not being “revolutionary enough.” Responding to the accusation, Ansari called on the hard-liners to demonstrate their own revolutionary zeal by going to Syria and fighting for the Assad regime because “the martyrdom table is available there,” a reference to the IRGC and Quds Force casualties in Syria, and implying implicitly that the reformists and moderates are not willing to do the same.

Ultimately, the fate of Bashar al-Assad must be decided only by the people of Syria through democratic elections and without outside intervention, after a period of peace. But, as the war in Syria is expected to intensify over the next several months, it is important to recognize that Iran’s leadership is not unified about the fate of President Assad. This important fact might help bridge the differences between Iran and Russia on the one hand, and the United States and its allies on the other.