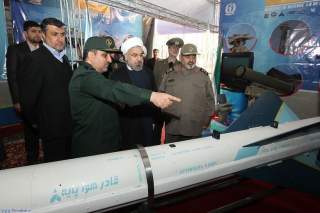 Ask U.S. Secretary of State John Kerry why the Joint Comprehensive Plan of Action is so important to the foreign policy interests of the United States and its allies, he would likely tell you that the pact averts the possibility of yet another U.S.-led confrontation in the Middle East.

Whether you like all of the agreement’s provisions or not, Kerry has hit that message home as he makes the rounds on television, classified briefings, and testimony in front of Congress: the JCPOA, he argues, is the only lever that the international community has to prevent the Iranians from assembling a nuclear weapons capability over the next 15 years. Anything other than a negotiated settlement, in the administration’s mind, will be a stepping-stone to a war with dramatic repercussions.

And what about the prospects of a unilateral Israeli strike on Iran’s nuclear facilities? That would be a mistake of unimaginable proportions, according to Secretary Kerry. Asked exactly this question by NBC’s Matt Lauer recently on the Today Show, Kerry was blunt in his warnings. An Israeli military operation on Tehran’s program “would be an enormous mistake,” Kerry said, “a huge mistake with grave consequences for Israel and for the region.”

But how much of a mistake would the military option be? How would Iran respond in the event of Israeli airstrikes on Tehran’s nuclear enrichment and research facilities? Would Iranian retaliation really be that devastating to the United States and its allies?

1.  Use Diplomatic Channels at the United Nations

For understandable reasons, Israeli Prime Minister Benjamin Netanyahu genuinely believes that the Islamic Republic of Iran is run by a collection of unreasonable, unconstrained, irrational men who are too deceptive and/or crazy to deal with. Yet if past history is any guide, the first response from the Iranian Government is likely to be a full-court press at the United Nations against Israel and a formal complaint to the United Nations Security Council, the General Assembly, and the Human Rights Council that Israel’s aggression is a violation of their national sovereignty and a direct infringement of Article 2 in the United Nations Charter.

Using diplomatic channels would be an especially appealing option for President Hassan Rouhani and Foreign Minister Mohammad Javad Zarif—both of whom have devoted their tenure to improving Tehran’s image in the eyes of the world.

A formal Iranian complaint would be dead-on-arrival once it hits the desk of the Security Council, but it would nonetheless serve its intended purpose: demonstrate to the developing world (Russia and China in particular) that the Iranian Government is a responsible power whose sovereignty was targeted by the aggressive actions of another state without sufficient cause. The objective, therefore, is not to actually pass a resolution in favor of Iran, but rather to embarrass Israel and depict it as a belligerent to a wide swath of the global community.

2.  Redoubling support to its proxies

According to a 2013 profile in The New Yorker on Qassem Soleimani, the commander of the Islamic Revolutionary Guard Corp-Quds Force, Iran contributed $100 million to Lebanese Hezbollah every year from 2000-2006. Hundreds of millions of additional dollars have been given to the organization since that time — a consistent pool of resources that has permitted Hezbollah to stockpile a conservative estimate of 50,000 missiles in southern Lebanon in preparation for another war with Israel. Tens of millions more have been transferred to Hamas’ Izz al-Din al-Qassam brigades since the two began a reconciliation after a falling out over support for the Assad regime. “Apart from using Iranian aid to rebuild the [Hamas] tunnel network,” writes Con Coughlin of the Telegraph, “the Palestinian brigades are also replenishing their depleted stocks of medium-range missiles…”

Because Iran doesn’t share a land border with Israel, you can expect Tehran to extend its material and arms support to both of these organizations after an Israeli air campaign against its nuclear program (Iran would have more resources to do so, given the sanctions relief that it is receiving for implementing the JCPOA). Through improved technology and successful defense research with the United States, Israel has been able to render many of Hamas’ rockets ineffective. Yet even with Israel’s sophisticated anti-missile defense system, it would be difficult to counteract a coordinated attack from Hezbollah in the north and Hamas in the west simultaneously. Iran, meanwhile, would still be afforded some small degree of plausible deniability.

It may seem like an incredibly odd thing for Iran to do given its Shia composition, but the country has tacitly worked with Al-Qaeda in the past—a Sunni jihadist group that has killed thousands of people just because they happened to be worshipping in the wrong way. The U.S. Treasury Department has sanctioned numerous Al-Qaeda commanders for using Iran as a staging ground to transfer fighters and money to and from South Asia and the Middle East. And the ayatollahs in Tehran have largely looked the other way when Al-Qaeda is working to target the United States or American interests.

An October 2012 notice from the Treasury Department summarizes the Al-Qaeda-Iran relationship quite well. “This [Al-Qaeda] network uses Iran as a critical transit point and operates under an agreement between al-Qa’ida and the Iranian government,” former U.S. Undersecretary of the Treasury (and now Deputy CIA Director) David Cohen writes. “Under the terms of the agreement between al-Qa’ida and Iran, al-Qa’ida must refrain from conducting any operations within Iranian territory and recruiting operatives inside Iran while keeping Iranian authorities informed of their activities. In return, the Government of Iran gave the Iran-based al-Qa’ida network freedom of operation and uninhibited ability to travel for extremists and their families.”

Al-Qaeda’s own operatives have confirmed through internal correspondence that Iran was once thought of as a perfect base to re-establish itself after its expulsion from Afghanistan following the September 11, 2001 attacks. While those plans were shelved due to expense, it is not inconceivable that the group would be offered expanded freedom of movement inside Iran if Ayatollah Ali Khamenei and the IRGC believed such a partnership would serve their interests.

Iran has a habit of sweeping up American citizens who reside in or travel to the country, charging them with espionage, locking them up in Evin prison, putting them on trial, and convicting them for being members of the CIA. Sarah Shourd, Shane Bauer, Joshua Fattel, Robert Levinson, Amir Hekmati, Saeed Abedini, and Jason Razaian have all been picked up by Iranian authorities (or, in the case of Levinson, disappeared) and accused of being U.S. government agents. In each of these cases, the detention of an American was an international headline that made the United States look feckless and unable to guarantee the safety of its citizens.

Even if Israel chose to act alone during a military operation against Tehran’s nuclear program, Iran would likely assume that Washington was involved in some fashion — either through intelligence channels or military enablers. This is why Iranian authorities would likely view the arrest and prosecution of more Americans as justified under the circumstances. The imprisonment of even one additional American in an Iranian detention facility for a lengthy sentence would be a black eye to the United States and would elicit an uproar among members of Congress.

If you think Afghanistan is chaotic today, it can get a lot bloodier if the IRGC-Quds Force increases its covert support to insurgent groups fighting the Afghan national security forces. Whereas Iran and the Taliban were once bitter enemies in the late 1990s (Iran was all but ready to launch military action against the Taliban in 1998 after nine Iranian diplomats were slaughtered by the movement), the two have turned into allies of convenience—if only because both consider the United States to be a major irritant in the region.

Thanks to Chelsea Manning’s disclosure of hundreds of thousands of “war logs” to the anti-secrecy group Wikileaks, we know how extensive that cooperation has been in the past: Taliban fighters training across the border in eastern Iran; Iranian agents providing money and weapons to anti-government insurgent groups; millions of dollars in bribes given to senior Afghan government officials, among other cases. Defense Secretary Robert Gates lambasted Iran in 2010 for “playing a double game” in Afghanistan—supporting the Afghan government with cash, while at the very same time building contacts among the various Afghan insurgent factions.

At a time when the United States is closing out its fourteen-year engagement in Afghanistan, the last thing that Washington wants is an Iraq-style disintegration of that country’s security situation. Yet this is exactly what Tehran could foment in order to retaliate against an Israeli attack. Such a decision would also have the effect of jeopardizing another multi-year U.S. military engagement in a country where Americans have fought and died.

However Iran chooses to respond to an Israeli attack on its nuclear program, Khamenei will instruct the IRGC-QF to do its work as discreetly as possible. Any overt missile attack on an American ally in the Arab world — let alone a conventional missile attack on Israel — would prompt the U.S. armed forces to scramble the fighter jets and deploy the aircraft carriers. This is not something Iran wants and a full U.S. military operation is certainly not something that they can afford to confront.