Iran's Nuclear Deal Was Doomed from the Start 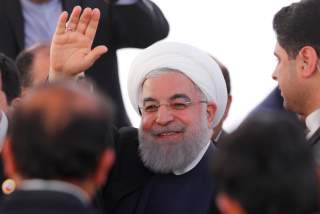 On May 8, President Donald Trump announced that he would reimpose sanctions on Iran, the lifting of which was at the heart of the Joint Comprehensive Plan of Action (JCPOA), the so-called Iran deal. Was Trump right? Absolutely, and for a number of reasons.

Too many nonproliferation experts and supporters of the deal too quickly dismissed Israeli prime minister Benjamin Netanyahu’s revelation of a secret Iranian nuclear archive as irrelevant, showing nothing new, or proof that the JCPOA actually worked. Such a position only shows that, for these organizations, subjective politics trumps objective analysis. At the very least, the International Atomic Energy Agency (IAEA) and perhaps other signatories to the JCPOA must methodically go through the archive. No assessment can be made sight unseen. What is certain, however, is that precedent suggests that the archive itself is a violation. After all, when South Africa forfeited its nuclear program in 1991, the IAEA did not allow it to keep blueprints for a nuclear warhead. It makes perfect sense to suspend sanctions waivers until such a time as that review is complete.

But is that Trump’s strategy? During his televised address, he labeled the JCPOA “defective at its core” and promised to scrap it. In reality, however, Trump’s actions may not be so black and white. It can take 180 days to restore the architecture of sanctions. This means not that the clock ran down on negotiations to save the deal, only that the negotiations have gone into overtime. If Europe and Iran did not believe Trump’s resolve before, they might now. Trump might have appeared resolute in his announcement, but consistency is not a defining virtue of Trump’s intellect or administration. Indeed, Trump prides himself on unpredictability.

Is walking away from the deal a self-inflicted wound for American credibility or the cause of nonproliferation? Former President Barack Obama responded to Trump’s announcement by declaring, “The consistent flouting of agreements that our country is a party to risks eroding America’s credibility and puts us at odds with the world’s major powers.” Conservatives and Trump supporters are wrong to suggest that there is no reputational damage to U.S. credibility, but Obama overstates it. There is a reason why the Founding Fathers established a ratification process for treaties. Simply put, there is a difference between walking away from an agreement of arguable effectiveness that never received majority Senate support and tearing up a treaty. Obama might have achieved a stronger JCPOA had he been willing to use the need for ratification to elicit greater Iranian concessions. Obama does not seem to understand that the history of modern American leadership has often involved put the United States at odds with world powers and even its allies.

Multilateralism does build symbolic legitimacy, but unilateralism often brings the most effective change. There will be no break with Europe. The sanctions on Iran’s Central Bank which Trump now reimposes mean that European leaders have a choice: trade in rials or in dollars, but not both. No European government is willing to sacrifice hundreds of billions of dollars in trade to stand in solidarity with the Islamic Republic. Don’t take my word for it? Ask Bill Clinton: It was Clinton who, beginning in 1994, issued a number of executive orders and in 1996 signed the Iran Libya Sanction Act, which together imposed unilateral on Iran and applied them in an extraterritorial manner to European companies willing to flout them.

Nor will the Iranian bluster necessarily mean a full-scale return to Iran’s pre-JCPOA nuclear program. The Obama administration justified its diplomacy in part on the belief that pressure on Iran had backfired. After all, the number of centrifuges Iran operated increased exponentially during the George W. Bush administration. What Obama and proponents of the JCPOA ignored, however, is that the European Union nearly tripled its trade with Iran between 1998 and 2005 in the belief that tying Iran into the world economy could moderate it. During the same period, the price of oil quintupled. A fair read of the data, then, could suggest that it was too much trade and diplomacy rather than too little that catalyzed Iran’s nuclear program. Iranian leaders say they may leave the Nuclear Non-Proliferation Treaty, but when North Korea threatened to do likewise during the Clinton administration, it was both the position of the IAEA and Washington to suggest that no such move would be legitimate until all questions that arose during its membership in the NPT regime had been resolved.

The economy remains Iran’s Achilles’ heel. While the Obama administration initially opposed new sanctions on Iranian banks, the Senate passed them anyway 100–0. Team Obama subsequently acknowledged that it was those sanctions which brought Iran to the table, as Iran’s economy shrank 5.4 percent. While Tehran will always try to blame its woes on “the Great Satan,” the Iranian public has always blamed its own leaders for Iran’s economic malaise. And, in the post—JCPOA period, this was no different. This is why Iranians took to the streets in December 2018 and why, sporadically, protests continue. Iran might complain and it might engage in the usual “good cop versus bad cop” strategy to pair bluster with offers of diplomacy or to divide Europe from the United States, but it knows that it cannot divert limited money back into the nuclear program without fear of a domestic explosion. Trump’s timing is also wise. The fall in oil prices crippled Iran, but oil prices are now on the upswing. Trump’s move makes it difficult for Iran to capitalize on that potential windfall.

The problem with Iran, however, has never been in Washington; it has always been in Tehran. Trump was not wrong to put the JCPOA on life support and then threaten to pull the plug. It’s not quite dead yet, and brinkmanship is sometimes necessary. Even if the JCPOA had survived, its sunset clauses and Iran’s ballistic-missile program meant a new strategy was necessary. Let’s just hope Trump has one as he moves forward.

Michael Rubin is author of Dancing with the Devil (Encounter, 2015), a history of American diplomacy with Iran, North Korea, and other rogue regimes.