Iran's Plan for Syria Without Assad 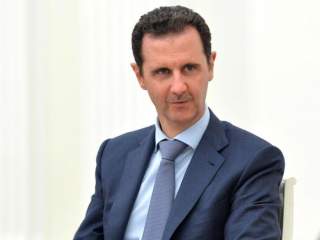 On February 25, 1987, late Syrian President Hafez al-Assad sent his troops to the Fathallah barracks in West Beirut, where they killed twenty-seven members of Hezbollah in a move designed to show Syria’s upper hand over Iran in Lebanon. Almost three decades later, this modus operandi is completely reversed under Assad the son, as Syria sinks into a war of attrition and Tehran gains the upper hand in Damascus.

For Iran, Bashar al-Assad has been a valuable ally but not an indispensable one. His coming to power in 2000, followed by the Iraq war in 2003 and Syria’s withdrawal from Lebanon in 2005, freed Iran’s hand in the Levant. Hezbollah under Bashar al-Assad has received weaponry and political backing unthinkable in his father’s time, including long-range Scud missiles and a 2010 Damascus visit by the party’s chief Hassan Nasrallah. But while Tehran has worked since the beginning of the Syrian war in 2011 to prolong Assad’s hold on power, it has also planned from the very early stages of the conflict for the day after, should its ally fall or should the regime lose Damascus.

Even as Iran sits at the negotiating table in Vienna, its strategy overlooks the political debate and the successive failed processes. It is instead rooted in creating new realities and proxies on the ground in Syria, looking beyond Assad and preserving its core interests. These interests are defined today by three goals: (1) Ensuring arms shipments continue to Hezbollah; (2) Gaining a strategic foothold in Levant and against Israel; (3) Preventing a stable government opposed to Iran from fully ruling over Syria.

While these three goals are met today under the depleted rule of Bashar al-Assad, Tehran is putting in place new nonstate military structures that would protect these interests should Assad fall. Iran, according to Reuters, has established a massive Alawite force (Assad’s ruling minority) that numbers over 200,000 men, and has recruited Shia fighters from as close as Iraq and as far as Afghanistan to carry out its fight.

High on Iran’s priorities is protecting and sustaining arms shipments to the Lebanese armed group Hezbollah through Syria. This support has guaranteed strategic depth for Hezbollah, and turned it to Iran’s strongest proxy asset in the Middle East. Since 1982, Hezbollah has developed a political and military stamina that made it both a powerful broker in Lebanese politics and a strategic threat to Israel. Today, Hezbollah’s role has been a game changer in the battlefield in Syria, holding critical areas and so far helping prevent the fall of the capital Damascus.

The party’s involvement in Qusair, Qalamoun and Zabadani since 2013 magnifies its focus on supply routes, and its determination at any cost to prevent the rebels from controlling those areas. It was Zabadani, after all, where in 1982 Iranian Revolutionary Guard Corps (IRGC) stationed their headquarters to train the early recruits of Hezbollah. It was also through Zabadani that David Dodge, former head of American University of Beirut, was taken and transferred to Tehran during Lebanon’s foreign hostage crisis (1982–1992). The town’s passages and proximity to the Bekaa Valley makes surrendering its control a nonstarter for the party.

On the battlefield, Hezbollah has made headways in Zabadani, and has negotiated a deal with the rebels that would allow population swaps from different parts in Syria. The agreement would entail bringing threatened Shia in the towns of Fu’a and Kefraya in northern Syria to replace the local population of Zabadani, whose population would move to rebel-held areas.

These tactics highlight Iran's cold pragmatism in Syria and its nitty-gritty involvement and calculus, irrelevant of the Assad regime. Hezbollah and pro-Iran militias are less present in the far north and east of Syria; those territories are not as critical for Iran as the coast and the Lebanese border, and could eventually be ceded to the rebels in a future ground settlement. When it comes to routes to Syria, post-Saddam Iraq has also granted Iran much-needed airspace and recruiting ground to reach and operate, despite U.S. complaints to the Iraqi government.

By becoming a critical player in Syria, Iran also attempts to poke its archenemy Israel from a new battle front that has been quiet since 1973. Iran’s move to build a presence near the Golan Heights is a red line for Israel, and has instigated preemptive military action more than once in the past year. In January, Israel assassinated Hezbollah’s Jihad Mughniyeh with four others in Quneitra near the Golan Heights. The year ended with the killing of another member, Samir Kuntar, who has been operationally linked by Israel to the Golan front.

In promoting the above two goals, Iran is also establishing that if Assad falls, it will have enough proxies and presence in Syria to secure its influence and prevent a hostile regime from effectively taking over. The strategy in Syria looks very similar to Iran’s playbook in Iraq and Lebanon, where heavily armed and trained nonstate actors are securing Iran’s interests. Both the Iraqi and Lebanese models prove that these new militia structures are there to stay and are not bound to UN resolutions or state and international agreements. Hezbollah has effectively ignored UN resolutions calling to disarm it (UNSCR 1559), and the newly formed Hashd Shaabi militia in Iraq ignores the SOFA agreement between Washington and Baghdad.

This makes the chatter in Vienna on withdrawal of all militias from Syria a rhetorical fantasy in the near future. More broadly, Iran's strategy and operational buildup in Syria lays to rest the argument that its fate will be tied to Assad, or that a fragmented Syria will diminish Tehran's interests.

Syrian foreign minister Walid Muallem was recently quoted in The New Yorker telling John Kerry's aide in 2010 that “If we don’t succeed in opening up our economy, you’ll come back here in ten years and you’ll meet with Mullah Assad.” It has taken only five years for Iran’s influence to supersize in Syria, and it has the structure to continue with or without Assad.

Joyce Karam is the Washington Bureau Chief for Al-Hayat Newspaper and tweets at @Joyce_Karam.