Iran’s Relationship with Qatar Could Be Polarizing 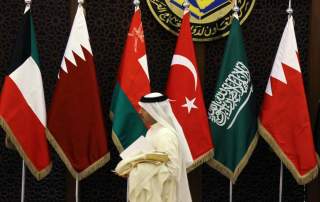 Tensions between the Gulf states and Qatar developed into an outright feud last June as a result of Qatar’s drift toward Iran, which led the Saudis and their partners to impose a boycott and cut off air, sea, and land routes to Qatar. Instead of responding positively to a demand that it cut ties with Tehran, Qatar defiantly restored full diplomatic relations with Iran. Now, the battle between Qatar and the quartet of Arab states led by Saudi Arabia has broken out on a new front: Dueling media coverage of the protests in Iran, with Qatar taking the side of the regime and the quartet backing the protesters.

“Iranian youths will no longer accept suffering and starvation, while the murderers and terrorist mercenaries of the regime are enjoying the wealth of the Iranian people,” wrote Ahmad al-Jarallah, editor-in-chief of the Kuwaiti daily Al-Seyassah.

Abdul Rahman al-Rashed, a prominent Saudi media figure with close ties to the royal court, wrote in the Saudi-owned Asharq al-Awsat newspaper, “The Iranian people harbor a genuine hatred for the regime.” Meanwhile, Al-Sayyed Zahra, columnist for the Bahraini daily Akhbar Al-Khalij, opined that the uprising of the Iranian people dealt a “fatal blow” to the Qatari strategy of aligning itself with the Iranian project in the region. Zahra also hoped the events in Iran will awaken the Qatari regime and make it return to the Gulf Cooperation Council (GCC) fold.

However, Qatari-funded Al Jazeera has aired statements by Supreme Leader Ali Khamenei and covered the pro-government rallies organized by the Iranian government. During the protests in Iran, Gulf critics have denounced Al Jazeera’s one-sided coverage, which signals a major shift from its role as an advocate of popular protests during the 2011 Arab uprisings in Tunisia in Egypt—and the 2009 protests in Iran. Syrian-American analyst Oubai Shahbandar told Arab News, “I remember in 2009, Al Jazeera English was the go-to channel for people in the West to follow the Green Revolution in Iran and to get the latest updates. Nowadays it really does seem that, more often than not, [Al-Jazeera] has become the go-to channel to get the Iranian regime’s viewpoint on the ongoing uprising.”

Shortly after the Gulf quartet launched its campaign to isolate Qatar, Al Jazeera made public overtures to Tehran. In July, executives from the network and from Iran’s Islamic Republic News Agency signed a cooperation agreement emphasizing “the need for using the media to create an atmosphere of peace, friendship and convergence.” The move was severely criticized in Arabic media.

Not surprisingly, Saudi news outlets have taken the harshest line against Tehran. Pro-government daily Al Riyadh opined in a January 2 editorial that the Iranian protests “may end the suffering of the people who were burned by the flames of the mullahs’ regime through its proxies in Lebanon and Yemen.” The reaction of the Saudi media echoes the words of the kingdom’s thirty-one-year-old crown prince, Mohamed bin Salman, who said in a May 2017 interview: “We won’t wait for the battle to be in Saudi Arabia. Instead, we’ll work so that the battle is for them in Iran.”

The tone of UAE officials and news sites has been tough but less severe, with a focus on urging the Iranian regime to reconsider its costly involvement in the region. UAE Minister of State for Foreign Affairs Dr. Anwar Gargash tweeted the Iranian leaders should “put the internal interest before Tehran’s adventures in the Arab region.” “The interests of the region and Iran lie only in internal construction and development, not in antagonizing the Arab world,” he added.

Nonetheless, prominent political science professor Dr. Abdulkhaleq Abdulla, who is close to the UAE leaders, tweeted, “The continuation of internal pressure and the mounting of external pressure mean that the days of the clerical regime in Iran are numbered.” UAE daily The National did not forecast a revolution, but said in a January 1 editorial that the protests are “the screaming voice of a nation. The Iranian elite must start to listen.”

In Bahrain, where Iran has stoked unrest among the Shiite majority, columnist Faysal al-Sheikh, writing on January 2 in the pro-government daily Al-Watan, denounced Bahraini Shiites who are silent in the face of Iranian repression. “Now that the Iranian people are rising up against this tyrannical regime, we can only wish them success in overthrowing the tyrannical dictator,” he wrote.

While press coverage in the Gulf reflects the divide between Qatar and the Saudi-led quartet, it has also provoked a reaction from Tehran. Iranian foreign minister Mohammad Javad Zarif said in a tweet posted on January 5, “Eternal bedfellows #KSA and #ISIS — following Trump’s lead — all endorse violence, death and destruction in Iran. Why are we not surprised?”

Meanwhile, Qatar and Iran are not the only targets of Gulf criticism. Lt. Gen. Dhahi Khalfan al-Tamim, former deputy head of Dubai Police and General Security, also slammed Turkey via Twitter for supporting the Iranian regime. He wrote, “[Turkish president Recep Tayyip] Erdogan incites against Egypt and defends Iran. They don’t go together well.” “Erdogan is despised among Arabs since he is the enemy of the nation,” the general said in another tweet.

The connection between Qatar and Turkey is that both have become the chief allies of the Muslim Brotherhood, an Islamist group designated by Saudi Arabia and UAE as a terrorist organization. For example, the two countries host several key Muslim Brotherhood figures who fled their homelands. Similarly, bilateral relations between Turkey and Iran have recently warmed significantly in the midst of Turkey’s authoritarian and anti-Western evolution. One strange illustration of the renewed ties between Tehran and Ankara is the case of Reza Zarrab, an Iranian-Turkish gold trader who recently pled guilty in a U.S. federal court to orchestrating a multi-billion-dollar scheme to help Iran evade U.S. sanctions with the help of Turkish banks in 2013 and 2014.

This deep polarization between the Gulf states and Qatar has grown out of an already-troubled relationship, which Qatar seriously aggravated by interfering in the internal affairs of other Gulf states, supporting Islamists, and drawing closer to Iran. For years, Qatar sought to enjoy the benefits both of membership in the GCC and close relations with Iran and its proxies. Now it’s time for Qatar to carefully reconsider the Gulf’s growing concerns over the Islamic Republic’s behaviors in the region and side with its Gulf allies to end the most serious rift in the GCC’s history.

Romany Shaker is a research analyst and Arabic language specialist at the Foundation for Defense of Democracies, a Washington-based nonpartisan research institute focusing on national security and foreign policy. Follow FDD on Twitter @FDD.

Image: A coordinator walks past a Turkish flag and flags of Gulf Cooperation Council (GCC) before a meeting in Riyadh, Saudi Arabia, October 13, 2016. REUTERS/Faisal Al Nasser​