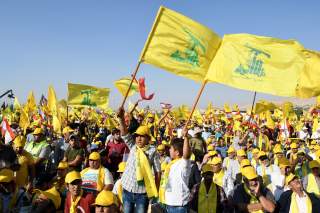 The Boycott, Sanctions and Divestment movement, better known by the acronym BDS, targeting Israel has largely been viewed as a Palestinian- and Western European-driven campaign with the alleged goal of advancing Palestinian statehood. Yet the Islamic Republic of Iran’s key role in stoking the BDS movement has increasingly become a key factor in economic warfare against the Jewish state.

All of this helps to explain why it is often important, as a counter-terrorism project, to decipher the BDS movement. Take, for example, Iran’s efforts to promote genocidal anti-Israel sentiment in Europe: the annual al-Quds Day rallies, which were called into global action in 1979 by Ayatollah Ruhollah Khomeini, the founder of Iran’s theocracy, urges individuals to support the BDS movement and the destruction of Israel. Al-Quds Day rallies blanket European cities such as Berlin, London and Vienna. Iranian-backed Islamists have no qualms about marching together with an amalgam of neo-Nazis, German political leftists and supporters of the U.S.- and EU-designated terrorist entity the Popular Front for the Liberation of Palestine.

The Iranian regime-owned Islamic Center of Hamburg charters buses with Iranian regime and Hezbollah supporters to travel to Berlin to march in the al-Quds Day rally. Since 1996, there have been twenty-one al-Quds Day marches in the German capital.

Hamidreza Torabi, an Iranian religious leader who has called for Israel’s elimination at the rallies, heads the Islamic Academy of Germany—part of the Iranian regime-owned Islamic Center of Hamburg. At the 2016 rally, he held a poster urging the “rejection of Israel” and calling the Jewish state “illegal and criminal.” The Berlin government has made half-hearted efforts to rope in the pro-Iran regime mini-movement by banning Hezbollah flags at the rallies. Berlin's state government refuses to outlaw all of Hezbollah.

It is worth recalling that the United States, Israel, the Arab League, Canada and the Netherlands have outlawed all of Hezbollah. The European Union has merely proscribed Hezbollah’s so-called military-wing as a terrorist organization, leaving the organization free to recruit, raise funds and otherwise operate in most of the EU. Hezbollah—a wholly-owned Iranian subsidiary—uses its organizational presence to expand the BDS movement in Europe.

Iran’s grassroots campaign to shape European and American opinion is not limited to demonstrations. In 2016, the Bavarian city of Bayreuth awarded 10,000 euros to a U.S.-based activist group—Code Pink—that supports a boycott of the Jewish state and has participated in a conference in Iran with Holocaust deniers. The women’s organization Code Pink has gone to great lengths to defend Iran’s regime. In January, the Israeli government banned representatives of Code Pink and an additional nineteen BDS organizations from entering the country because of their campaign to dismantle Israel.

A second NGO—the International Association of Democratic Lawyers (IADL)—an entity set up by the now-defunct Soviet Union—supports the BDS movement while providing a legal defense for the Iranian regime’s controversial nuclear program.The U.S.-based bank Comerica terminated the bank account of the IADL after its connections to Iran and the BDS movement were exposed in the media.

​Moreover, on the grassroot donor involvement front, the Rockefeller Brothers Fund (RBF) has played a role in promoting the nuclear deal with Iran, especially since Stephen Heintz became its president in 2001 and looked to involve RBF in “peace building/making” through fostering ties between Washington and Tehran. RBF at large has been a staunch supporter of the BDS movement with its support of the organizations Jewish Voice for Peace (JVP) and Breaking the Silence. It is worth to note that JVP has been designated as one of the groups that are forbidden from entering Israel today given their work to destroy the country.

The American government estimates that Iran’s regime provides Hezbollah about $700 million per year. Money is fungible, and it is certainly possible that Iran and Hezbollah are using substantial funds for the movement’s operatives in Europe to stoke the BDS movement. There are, after all, 950 active Hezbollah members in Germany alone. According to a 2017 intelligence report from the state of North Rhine-Westphalia, Hezbollah fighters disguised themselves as refugees to enter Germany as part of the migrant wave. The real number of Hezbollah members in Germany may actually be several thousand.

​Further, individuals ​like Jeremy Corbyn, the head of the British Labour party, who was the past chairman of the pro-BDS Palestine Solidarity Campaign, have normalized the anti-normalization of pro-boycott Israel measures through support of the BDS movement and Iran.​

The British Labour politician Kate Osamor, the shadow development secretary, publicly backed the BDS campaign in December. Corbyn supports “targeted” BDS activity. In other words, he supports the BDS movement because limited boycotts of Israel spell a de facto boycott of the Jewish state in Europe. The slippery slope of limited BDS activity leads rapidly to a full-blown boycott of Jewish goods. Corbyn infamously worked for Iran's “media” outlet PressTV, and termed the pro-BDS and terrorist entities Hamas and Hezbollah his “friends.”

Benjamin Weinthal is a fellow for the Foundation for Defense of Democracies. Follow Benjamin on Twitter @BenWeinthal. Asaf Romirowsky is the executive director of Scholars for Peace in the Middle East (SPME) and a Fellow at the Middle East Forum.