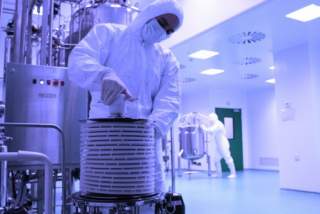 Hidden behind the hundreds of stories in recent months about the negotiations with Iran lies a basic process obscured by the talk of diplomacy and deals: the transfer of technology.

Two hundred years ago this summer, Iran was engaged in a parallel set of talks with the Western powers about its right to acquire the latest scientific and military expertise. It was not nuclear technology that was at stake in the summer of 1815. Rather, it was the new military-industrial techniques that in the previous half century had seen European armies rapidly and orderly fire their way across former Muslim kingdoms from India to Egypt. The Middle Eastern powers who witnessed this saw the transfer of Western technologies as their only hope of security. Having been ravaged by Russia from 1804 to 1813, Iran had particular reason to be fearful. But as the lone Shiite state in the region, her long term enemies were her Muslim neighbors. The Ottoman, Mughal and Hotaki rulers of what is now Syria/Iraq, Pakistan and Afghanistan had all waged war against Iran’s “heretic” Shiites.

Two hundred years ago, the Middle East was seeing a rapid rise of new powers. The French had invaded Egypt, the British were laying waste to the Muslim kingdoms of India and Russia was tearing off chunks of Ottoman territory. The Ottoman Empire was splintering as its own former strongman Muhammad Ali seized power in Egypt and invaded Syria while fundamentalist Wahhabis seized the holy cities of Arabia. Then as now, Iran was caught in the midst of this turmoil, as fearful of her Muslim neighbors as she was of Europe.

This regional context was crucial to deliberations between Iranian and European diplomats of the period over how much access Iran should be given to the new sciences and their potential military uses. Today, Iran when looks at the nuclear powers on its doorstep in Pakistan and Israel, it recognizes well the role of technology transfer in their empowerment, diplomatic as much as military. In the 1810s, it looked to its similarly hostile Ottoman neighbor and imitated their policy of acquiring the latest European military sciences. They called this nizam-i jadid, or “new order.”

Then as now, what raised those local rivalries and imitations to global importance was the interests of the Western powers. In 2015 it is the rise of “Islamic State” that has led the United States to negotiate with Iran. In the years leading up to 1815, it was the French and Russian thirst for conquest that made British diplomats parley with Iran.

Connecting these negotiations across the centuries is the interplay between Iran’s diplomatic resourcefulness as a regional partner and the transfer of technology from Europe to the Middle East. The latest negotiations did not begin in September 2013 with President Obama’s phone call to President Rouhani. Nor are they a belated response to deal with the regretted technology transfers of the 1950s through 70s that saw U.S. and European scientists help Iran establish its nuclear program. Their true beginning was two hundred years ago when the global repercussions of the war against Napoleon saw Iran use her geostrategic position to leverage a deal with British negotiators. As a reward for its turn against France, the Iranian government received military instructors to help its wars with its neighbors and in July 1815 sent its first students to London to learn the latest scientific technology.

Since then, Iran’s relations with the Western powers have moved through a cycle of alliance and enmity, importance and insignificance. But in two centuries of diplomatic waxing and waning, the transfers of technology set in motion during the Napoleonic Wars have continued. Iran’s nuclear program is itself such a transfer, first from the United States and Germany and, since 1979, from Russia and China.

What has crucially changed over this period is Iran’s emergence as a regional power in its own right. Whatever the rhetoric of its former revolutionaries, Iran is no longer the pawn of imperialists. Now that a nuclear deal has been reached, the larger challenge is to prevent further technology transfers from leading to “breakout.” As the past two hundred years show, that—and not the negotiations—will be the real long game.

Nile Green is Professor of History and Director of the UCLA Program on Central Asia. He is the author of a book on Iran’s earlier technology transfers, The Love of Strangers: What Six Muslim Students Learned in Jane Austen’s London (Princeton, 2015).