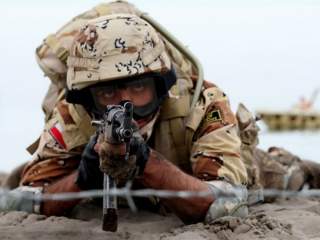 In late June 2013 the Economist underscored the need for stripping Iran of its nuclear program “to stem the rise of Persian power.” A “nuclear Iran,” it asserted, would seriously challenge Western interests in the Middle East and endanger “Israel’s right to exist.” The magazine concluded: “When Persian power is on the rise, it is not the time to back away from the Middle East.” Arguing from the opposite angle, Hillary Mann Leverett, a former U.S. National Security Council official, wrote in March 2015: “In reality, Iran’s rise is not only normal, it is actually essential to a more stable region,” because America’s recent “imperial overstretch” to permanently create a pro-American regional order, and the post-1979 Faustian bargain involving Israel and Saudi Arabia to contain Iranian power, had failed.

President Obama has of late reckoned with this reality, after long denial by successive U.S. administrations since 1979. At the end of the second GCC-U.S. summit meeting in Saudi Arabia held on April 21–22, he delivered two important messages, among others, to the Gulf Arab leaders: that the United States had no interest in direct confrontation with Iran, and that the Gulf leaders should depend more on their military capacities to defend their countries. Implicit in Obama’s two messages was another significant message: the United States views Iran as a powerful actor in the Middle East, a reference to what he previously said in his interview with the Atlantic that the GCC should “share the neighborhood” with Iran, provoking sharp reactions from some of the Gulf allies.

Today, the rise of Iran is less of a political topic to debate and more of a reality to recognize. Compared to its Middle Eastern neighbors, Iran has made impressive strides in space technology in the past few years, putting the first satellite into orbit in February 2009; has emerged as a cyber power on the level of China or Russia; and has achieved significant advances in military hardware production, including sophisticated unmanned aerial vehicles, main battle tanks, and medium and long-range ballistic missiles. The Iranian defense industry is making gradual inroads into global armament markets, with Iraq, Syria and Lebanon already receiving regular arms shipments to fight Islamic State and other rebel forces. The Iranian state is capable of projecting force in the Gulf and the Levant, and has often challenged the United States—successfully or not—to stay out of the Gulf region, showing a high degree of foreign-policy independence.

Furthermore, traditional elements of Iranian power, such as its strategic location with unfettered access to the Indian Ocean and considerable control over the Strait of Hormuz in the southern entrance of the Persian Gulf, through which one-third of the world’s seaborne oil shipments passes; its long shorelines on the Caspian Sea, connecting Tehran to the Central Asian states and Russia; a large and educated population; huge reserves of oil and gas; and an expanding industrial base contributing to nearly 40 percent of GDP, despite Western sanctions—all these buttress Iran’s bid for a major power role in the Middle East.

Iran’s Moment in the Middle East

The immediate tipping point for Iran’s rise as a major regional power has been the historic nuclear deal, dubbed the Joint Comprehensive Plan of Action (JCPOA), Tehran and the P5+1 group of states (the United States, the UK, China, France, Russia plus Germany) signed in mid-July 2015, unleashing a rare “Iranian moment.” Politically, the deal forced the Americans to accord legitimacy to an cleric-led country they so far branded a “rogue state” or classified it in the so-called “axis of evil.” Economically, it mostly frees the Iranian economy from UN and Western sanctions to reintegrate into the world economy and thrive, while the West accepts Iran as a strategic partner in the fight against Islamic State violence and extremism.

The “Iranian moment” did not, however, emerge from the nuclear deal alone. It was two to three decades in the making, amid momentous developments that shook up strategic landscapes in and around the Middle East. Two of these crucial changes were the collapse of the Soviet Union in 1991 and the elimination of Iran’s two bitter enemies—Taliban Afghanistan to the east and Saddam Hussein’s regime to the west—by the United States in the early 2000s. Iran became the greatest strategic beneficiary of America’s military assault on Afghanistan and the invasion of Iraq under the rubric of the War on Terror, which the United States had hardly intended. The so-called Sunni wall of defense against Shia Iran completely crumbled, empowering Iran to influence political and strategic developments in post-Saddam Iraq.

In the ruins of the Soviet Union, there emerged half a dozen states in Central Asia, creating a buffer zone between Iran and Russia and thus relieving Russian pressure on Iran’s northern and northeastern borders. Relations between Iran and Russia were historically plagued with tensions and conflicts, including wars of territorial aggrandizement. As recently as 1941, the Soviet Union and Britain deposed the founder of the Pahlavi dynasty, Reza Khan Pahlavi (1926–1941), for his opposition to a joint British-Soviet plan to use Iran as a supply route for Soviet troops fighting German forces in areas northwest of Iran. Imperial Russia captured much of Persia’s territory in the Caucasus and Central Asia, forcing the Persian Qajar dynasty (1789–1925) to sign the Treaty of Turkmenchay in 1828. These historical defeats and humiliations at the hands of Russia remain quite fresh in Iran’s memory, though the two countries have in recent years forged an informal alliance relationship to oppose U.S. dominance and defend the Bashar al-Assad government in Syria, battered by a civil war unleashed by the Arab Spring.

It was the Arab Spring, especially the rise of the Islamic State in the summer of 2014, that acted as a catalyst for Iran to expand its regional sphere of influence. Tehran perceived the threats of Islamic State and Western-backed rebel groups against Syria and the Shia-dominated government in Baghdad as threats to its own security and the viability of the so-called “axis of resistance” comprising Iran, Syria and Hezbollah. The Revolutionary Guards justified military involvements and actions in Syria and Iraq in defensive terms: “If we do not fight them [Islamic State forces and various rebel groups] in Damascus, we have to fight them back in the streets of Tehran.” President Hassan Rouhani promised unconditional support for Iraq to combat ISIS terror, and Ali Akbar Velayati, a top foreign policy advisor to Supreme Leader Ali Khamenei, has often reiterated that President Bashar al-Assad’s ouster before his term ends is “Iran’s redline” in Syria. Iran appears firmly entrenched in Iraq and Syria, and has elevated its status as a power broker in the Arab world.

At the same time, a general decline in Arab state power has greatly aided Iran’s rise as the dominant regional player. Battered by the prodemocracy movements, Iraq, Libya, Syria and Yemen are in a state of violence and chaos; Lebanon is walking a political tightrope, infested with sectarian poison and caught between “push-and-pull” pressures from Iran and Saudi Arabia; Jordan is flooded with a massive influx of Syrian refugees; and Egypt’s military-run government is under stress from domestic challenges, the most serious being a jihadist insurgency spreading in the Sinai peninsula. The Arabs seem in no effective position, at least for now, to mount any serious challenge to deflect Iranian pressure or prevent its rise. Saudi Arabia’s efforts to square off against Iran in Syria, Iraq and Yemen have so far yielded no notable outcomes.

Strategies to Enhance Power and Influence

Iran’s rise to power has come with a big strategic shift from the export of revolutionary ideology to the cultivation of solid political ties with Shia constituencies across the Middle East. Ayatollah Khomeini’s post-1979 revolutionary rhetoric, especially his call on the Arabs to rise up and overthrow their un-Islamic, pro-U.S. kings and emirs, scared hereditary Arab rulers and the West in equal measure. That forced the United States and the Gulf rulers to jointly limit Khomeini’s revolutionary zeal by militarily and financially supporting the Iraqi invasion of Iran in 1980. Khomeini’s revolutionary appeal fell on deaf ears, as no Muslim community answered his call for revolutionary uprisings; neither did any Muslim country choose to establish an Iran-style velayat-e faqih (government of the jurist). Iran’s only external success was the creation of the Lebanese Shia resistance group Hezbollah in 1985, along Khomeini’s revolutionary ideals, to oppose Israeli occupation of southern Lebanon.

In contrast, Iran’s current strategy is nonideological. It consists of Shia political empowerment across the region, and the development of economic self-reliance—what the Supreme Leader calls the “resistance economy”—to absorb and survive economic shocks produced by hostile external economic policies, such as sanctions. Both elements of the current strategy substantially empower Iran for a robust regional role.

Historically, the cleavages of Persian versus Arab, and Sunni versus Shia, have stymied Iran’s efforts to spread its influence in the Arab world, except for a brief period after the 2006 Israel-Hezbollah war. That situation probably changed for good after the U.S. invasion of Iraq, which resulted in a shift of political power from Sunni to Shia hands. It encouraged Shia from across the region, including Iranian Shias, to develop political, economic and cultural ties to jointly stave off Sunni Al Qaeda fighters and oppose Sunni dominance in Iraq. For Iraqi Shias, a return to Sunni domination was more worrisome than Iran’s influence. Iran also created its own networks of political, business and cultural allies and clients to neutralize future Iraqi threats and to gradually force America to leave Iraq. With its deep involvement in the Syrian civil war to defend ally President Bashar al-Assad and his Shia Alawite community, Iran saw itself as the leader of a Shia revival stretching from Beirut to Tehran. It was the first country to send arms and military advisors to Iraq to resist Sunni Islamic State fighters, it has trained Shias from Afghanistan and Pakistan to fight in Syria, and it supports Houthi rebels in Yemen against a Saudi-led Sunni Arab coalition.