Iraq’s Dysfunction Will End in Revolution 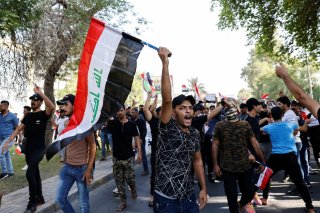 After several false starts, Iraqi political bosses settled on Mustafa al-Kadhimi, a former human rights researcher and journalist whom Prime Minister Haider al-Abadi had appointed to lead the Iraqi National Intelligence Services (INIS) in 2016 against the backdrop of the fight against the Islamic State. For the Iraqi political elite, Kadhimi was a safe choice: He remained clean in a system where corruption predominated, had good ties with everyone from Grand Ayatollah Ali Sistani to Kurdish leader Masoud Barzani and, at the INIS, proved himself a competent manager. As important for the political leaders who settled on Kadhimi as a transitional leader, he was boring. In a sea of flamboyant personalities, he was uncharismatic. He was also weak politically and had no permanent bloc of support in parliament.

More than a year-and-a-half into his transitional leadership, Kadhimi failed.

Granted, the cards the system dealt him were always poor. Iraq’s electoral system was long problematic. Coalition Provisional Authority administrator L. Paul Bremer and UN officials agreed to elections governed by both proportional representation and candidacy based on party lists rather than constituencies. Their goal: speed. But the long-term instability the system encouraged was obvious: candidates owed political survival to party bosses rather than accountability to constituents. As potential candidates sought to ingratiate themselves to the political bosses who would order the lists, they competed to be more ethnic chauvinist or sectarian than their peers. While Iraqis subsequently tinkered with the system to vote on a governorate rather than national basis, the same dynamic remained.

After the eruption of protests and Abdul-Mahdi’s resignation, President Barham Salih proposed core reforms that, if implemented, would have helped stabilize Iraq. Kadhimi did not use his bully pulpit or his moral authority to shepherd them through, however; Instead, parliamentarians elected under the old system that encouraged patronage and corruption eviscerated the reforms beyond any real meaning. Today, the same Iraqi political bosses engage in the same horse-trading that enriches and empowers themselves but abandons the Iraqis they claim to represent.

Kadhimi need not have been so weak. Even without a parliamentary bloc, he entered office at a tremendous moment with many ordinary Iraqis backing him as their last hope. At the same time, the traditional political elites’ backs were against the wall as the protest movement terrified them. He might have used that to his power, but Kadhimi squandered the opportunity as ambition took root. Resignation can be liberating, but Kadhimi wanted to remain. Reforms might antagonize the political leaders whose support he needed to remain in his position post-election and so rather than confront Barzani, for example, he approached him with obsequity. Rather than quash the practices that antagonize ordinary Iraqis—for example, the self-dealing and enrichment that comes with government officials rewarding themselves with land grant bonuses worth millions, Kadhimi continues the practice blind to the optics. Today, he has lost the street. Fully-geared riot police eying idle youth just outside the international zone is not a good look for a reformist.

The White House and intelligence community might appreciate Kadhimi’s promise to take on Iranian-backed militias but, behind the scenes, he has been nearly as permissive to them as his predecessors were. Demonstrations and even assassination attempts define redlines Kadhimi is loath to cross. The greater problem undercutting Kadhimi’s efforts to reign in such threats to Iraqi sovereignty is not fear, but ambition: To take on Iran too much would undercut his hope to win the approval of those political movements that Tehran backed. In effect, it was a game of charades in which rhetoric changed, but not reality.

Kadhimi says correctly that he entered office with one of the poorest hands of any recent prime minister. Abadi had focused his tenure on careful reform in order to build a base for investment and growth. Whereas in 2003, Iraq had a population of 25 million, by 2014 when he took over from Nouri al-Maliki, Iraq’s population was approaching 35 million. Abadi’s chief of staff Naufel Alhassan warned presciently about the dangers caused by Iraq’s inflated payroll and its inability to provide non-oil sector jobs.

Abdul-Mahdi’s team did not care. As oil prices increased, he tossed reforms out the window and handed out civil service jobs like candy. In just his single year in office, for example, his electricity minister added tens of thousands of jobs to the permanent payroll, with no sustainable way to pay for them and without any appreciable improvement in services.

Kadhimi had to scramble to make payroll in order to offset the shortfalls left him by Abdul-Mahdi’s incompetence, if not his team’s theft. Today, Kadhimi often brags to visitors that he has increased the proportion of non-oil sector revenue, but his team tightly holds the numbers to back this claim; many Iraqi economists say it is just a line spun to assuage visiting diplomats and analysts. His government did inherit from Allawi and then release a detailed economic white paper which outlined sixty-four separate reform projects and highlighted what each ministry must do and under what timeline to achieve reform. While Kadhimi continues to pay lip service to reform, he hesitates to go further because to do so might antagonize the entrenched interests whose support he now wants as his mission shifts from reform to extending his tenure.

What saves Kadhimi—and the system he heads—is today not successful reform but high oil prices. Meanwhile, the population continues to grow. By 2025, Iraqi will have more than 45 million; by the end of this decade, it will surpass 50 million. There remains no real sovereign wealth fund nor reduction of the civil service to sustainable levels. Should the price of oil drop from $70 per barrel to $30, the system will crash. The question is now not if but when. Extraction of oil is becoming cheaper and new fields coming online each year. China’s population—and thirst for oil—will soon peak given the demographic effects of more than three decades of its one-child policy. As China’s population declines and with it the economic growth the demographic dividend brings, Beijing might also turn inward to fracking and other domestic energy sources. Nor does any of this discussion address the fact that a growing embrace of alternative energies undercuts the energy primacy that Iraq and its neighbors once enjoyed. The United Arab Emirates, Saudi Arabia, and Qatar are all diversifying their economies; Iraqi leaders prefer to play political games for individual gain.

The events of October 2019 were a warning shot. Outrage motivated the protestors. They claimed Abdul-Mahdi as a victim but were willing to give Iraq’s leaders a chance to reform. Kadhimi has now squandered that opportunity. As Iraq’s population fast approaches the 50 million mark and Iraqi youth take to the streets again, they will not again accept that the problem was personality rather than system. The next revolution will be violent and will not differentiate much between parties. It will lead to a migration crisis, much like Iraqi Kurdistan’s kleptocracy faces, and a wholesale ouster of Iraq’s current political leadership into early graves or exile. The Biden White House can continue to approach Iraqi politics like a game of musical chairs, but it is today missing the big picture.