Iraq, Obama and the Future of War Powers 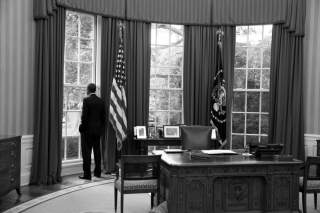 Editor’s note: The following is a postscript to the article “A Tale of Two AUMFs,” which appears in the September/October 2014 issue of The National Interest.

In early August, the United States began conducting a renewed set of military operations in Iraq. In response to the advances of the Islamic State, Washington started launching air strikes against the group, which have continued over the past several weeks.

The rationale for this action, as President Obama described it, was twofold: first, to “prevent a potential act of genocide” against the Yazidis, and second, to protect American personnel deployed in Iraq, particularly in Erbil. The domestic-law justification for these measures was the president’s power as commander in chief under Article II of the Constitution.

If the White House judges that the threat presented by the Islamic State is sufficiently great, and that a sustained military assault against the group is both necessary and wise, then asking Congress for a new Authorization for Use of Military Force (AUMF) is the best way to proceed. None of the three alternatives are good ones. The 2001 AUMF, understood to allow force against Al Qaeda and its “associated forces,” would be inappropriate primarily because of the dramatic and well-known split between the Islamic State and Al Qaeda’s central leadership earlier this year. (For more on this subject, see this post by Ryan Goodman at Just Security, which has a roundup of pieces that illustrates what he calls the “remarkable consensus of opinion . . . that ISIS is not covered by the 2001 AUMF.”)

The 2002 AUMF that authorized the Iraq War might or might not be a legally plausible option to target the Islamic State, but in almost every other respect it would be a ridiculous one. The 2002 decision to remove Saddam Hussein from power was completely different from the choice Washington faces today about whether and how to combat the Islamic State. Relying on a twelve-year-old law to launch a new military campaign now would be a rather transparent attempt to circumvent the existing Congress. As I argue in the article, there is no longer any sound reason for the 2002 AUMF to exist, and the White House and others are right to want to see it repealed.

That leaves the third option: the president’s Article II powers, which the ongoing mission in Iraq has relied on so far. Up to this point, this has been relatively uncontroversial, in part because the air strikes have had a fair level of public support, as well as because the president is generally agreed to have wide latitude to act in order to protect the lives of Americans abroad. But this may be about to change. DeYoung wrote that “the administration expects to continue airstrikes in Iraq for the foreseeable future.” The New York Times also reported that American officials said they were considering options for expanding the U.S. intervention into Syria, including sending in special-operations forces or conducting drone strikes against Islamic State leaders there. The longer this campaign goes on—and especially if the mission that it is intended to accomplish broadens over time—the weaker the case for relying only on Article II will get.

One final point is relevant here. The debate concerning what legal authorities ought to support Washington’s use of force in the broad “war on terror” is intimately tied up in the larger question of what the standard process should be for deciding when and where America uses military force. Right now, there is a great deal of confusion surrounding this subject. The confusion stems both from the 1973 War Powers Resolution—which presidents have consistently held to be unconstitutional but nevertheless remains in force—and from the nature of many of the conflicts the United States has waged recently, which have been fought against nonstate actors and surrounded by a great deal of secrecy.

In response, Senator Tim Kaine, along with Senators John McCain and Angus King, introduced what they called the “War Powers Consultation Act” earlier this year. Its purpose, as laid out in the bill’s text, is “to establish a constructive and practical means by which the judgment of both the President and Congress can be brought to bear when deciding whether the United States should engage in a significant armed conflict.” It aims to do this by repealing the War Powers Resolution and replacing it with legislation that the authors believe to be more clearly constitutional. The bill would establish a formal definition for what constitutes a “significant armed conflict” such that it would need congressional approval; set up a clear mechanism for consultation between the executive and legislative branches; and require that all members of Congress take a vote on any significant armed conflict within a defined time frame. This proposal has a number of advantages. Aside from the benefit of setting up a clearer framework for how the whole process ought to operate rather than relying on seemingly ad hoc decisions about when congressional input is needed, it would also make members of Congress more accountable on issues of war and peace. To this point, the senators’ legislation has received relatively little attention, and some of the bill’s details may have to be amended. Still, on the whole, their effort is very much worth supporting.