Iraq Is Still Worth Saving 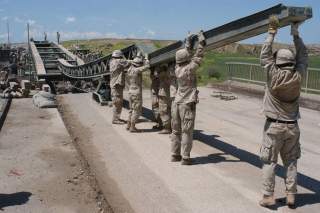 In his new book, Iraq After America: Strongmen, Sectarians, Resistance, Joel Rayburn has accomplished something remarkable. A book written before the invasion of northwestern Iraq this year by ISIL, and before the departure of Nouri al-Maliki from the prime-minister position, seems nonetheless entirely up to date—and Rayburn himself seems clairvoyant. Everything we have seen in Iraq these last several months follows logically, and now it appears almost inevitably, from his analysis.

I had hoped otherwise. Rayburn is a longstanding friend and colleague whom I got to know well during the days of the surge in 2007. He was extremely well groomed in Iraqi matters then; in the ensuing seven years, his mastery of the subject has only deepened. One lesson of this case, apart from what Rayburn teaches about Iraq, is that the U.S. military still does something right when it creates intelligence and politics expertise of this type among some of its best officers, and we need to preserve that capacity, even as the armed forces downsize.

But back to the issue at hand. For most of the last five years or so, when I listened to Colonel Rayburn describe Iraq’s severe problems, I tended to hope that he was wrong, that Iraqis would find a way, that a people and a political class that had been through such torment and suffering for years and years would not throw away such a chance to build a new and stable nation. My hopes, alas, were misplaced, and Rayburn was right.

His book does not dwell on America’s high-level political decisions—to fight the Iraq war in the first place, to do so with poor preparation for a proper stabilization effort in the early years, to surge forces and change strategy in 2007, to withdraw in 2011. Being a uniformed military officer, Rayburn clearly does not believe it his place to revisit such decisions. And that is a good thing. Enough other people have done so in their books on Iraq. Moreover, those decisions were so momentous that it is difficult for any author who addresses them to wind up saying much that is memorable about any other aspect of the subject.

Rayburn, by contrast, focuses on internal Iraqi politics since 2011. He defines three main classes of actors—Shia supremacists, Sunni chauvinists and Kurdish maximalists—who have, unfortunately, done so much in recent times to tear the country apart and leave it vulnerable to the ISIL onslaught of this past spring and summer. Nouri al-Maliki is of course a major villain, but he is hardly the only one—and the Shia groups he represents are hardly the only guilty parties in what has befallen Mesopotamia since the hopeful days of roughly 2007 through 2009.

This message of criticism for many of Iraq’s modern actors will surprise few, at least in its broad terms, though the detail on who did what and when is very useful (without being tedious or excessive either). But what is most important about the book is the detail about each of these major sectarian groups that includes not only numerous broad-reaching indictments of many powerful figures, but a number of hopeful stories and themes as well. For all of Iraq’s sectarianism, there are still many leaders—and much of the Iraqi public—that want to hold the country together and seize this historic opportunity.

Rayburn’s own words capture it best:

“There is a popular trope among western academics that since Iraq’s borders are an artificiality created by European diplomats, it must follow that Iraq itself is an artificiality, and that there is no genuine Iraqi national identity. But this is not borne out among Iraqis inside Iraq—at least not for the present. For all the fractures that run through Iraqi society and that divisive politicians and militants have exploited so well, there seems to remain a silent majority of Iraqis of all kinds who would greatly prefer to live together as one people, in one country. They consider themselves heirs to a common ancient Iraqi heritage, a people sharing the country where civilization was borne.”

As such, Rayburn’s message must still be interpreted as hopeful, despite what ISIL has wrought since he penned these pages. Indeed, the decision of Iraqis to form a new government under Prime Minister al-Abadi is an encouraging testament to their capacity to learn, and to recognize that going over into the abyss not once, but twice, within a decade may be to dig a hole from which they cannot save themselves—and that no one else will be willing or able to rescue them from, either.

Rayburn’s words also have implications for whatever kind of Iraqi federalism may emerge from the current mess. Those of us who have studied “partition” know it is hard and hardly any panacea in a situation like this. Rayburn’s message should help us realize that partition is also not what most Iraqis tend to want themselves, even if they may now feel the need to create new structures (like the Iraqi National Guard) that allow for more self-government in various ways. We should stay flexible and open-minded about new constitutional and institutional arrangements that may emerge in Iraq in the coming months and years, as its different peoples try to find a way to coexist while still also being one Iraqi people as well.

A final word, however—there may not be much time to waste any longer, as Rayburn reminds us. Thus, the Obama administration’s role in the current crisis, while impressive in the political and military results it helped produce in recent months, may not be enough for what now lies ahead. My own view (not necessarily Rayburn’s) is that among other U.S. diplomatic and economic roles, American advisory and mentoring teams and special forces may need to deploy in the field with Iraqi units—sooner, not later—as the Iraqi army and National Guard plot and execute a counteroffensive against ISIL in 2015. Iraq is still a country, and it is still worth saving, but it may not have much time left.