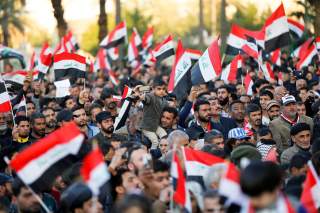 Iranian-backed Shia militias inside Iraq, once viewed by many Iraqis as saviors who helped the country defeat the Islamic State, are destabilizing Iraq’s infant and fragile government and creating additional tension between Baghdad and Washington.

There was a brief sigh of relief when an Iraqi government was finally formed in September. It took five months of wrangling after a national election in May. But the militias, more commonly known as Hashd al-Shaabi, or Population Mobilization Forces (PMUs), Iran’s major weapon in Iraq, are shattering this tenuous national unity and becoming a divisive force in a country that just last month seemed optimistically moving toward reconciliation.

A stalemate has emerged over Iraq’s next interior minister, who will presumably be responsible for the militias. Iranian loyalists who control the militias insist that their candidate, Faleh al-Fayyad, now the official head of the PMUs, become the next interior minister. Less-partisan Iraqi leaders disagree. Approximately sixty militias are under the PMUs, which were established in 2014 to fight the Islamic State. Many are loyal to Tehran.

When the new government was formed in Baghdad, the pick for the powerful post of interior minister, as well as others, was postponed. Iran’s influential loyalist in Iraq, Hadi al-Amiri, whose coalition placed second in September and who is, himself, a Shia militia commander, wanted Fayyad. Muqtada al-Sadr, a controversial Shia cleric whose coalition won the most votes in the election, made clear that all Iranian sympathizers were not welcome in government posts.

What is interesting, as well as tragic, about this particular Iraqi conflict is that it reflects a deepening Shia versus Shia rivalry. In the past, Iraq’s main political fault line was sectarian. But the election that brought two relatively nonaligned politicians to power—Prime Minister Adil Abdul-Mahdi and President Barham Salih—empowered those Shia leaders who want to curb Iranian meddling. Fearing a government collapse, President Salih met with Fayyad on November 3 and asked him to withdraw his candidacy.

Rival Shia factions led by Sadr and Amiri did unite to form the new government, but now this alliance is in jeopardy. “I made an alliance with you [Amiri], not with the corrupt and the militias,” Sadr wrote in an open letter to Amiri in November. “We agreed to run Iraq together in a right way and a new style in which its [Iraq’s] sovereignty and independence [would be] preserved,” Sadr wrote, emphasizing his desire to curb Iranian intervention.

The United States has a common cause with the anti-Iran Shia factions and believes cracking down on Iranian-backed militias is a priority. The militias serve as foot soldiers in Iran’s proxy wars across the Middle East. Iran-allied politicians and commanders such as Amiri and Fayyad want the militias to be an alternative to the Iraqi Army. This would essentially permit an independent army inside Iraq that takes direct orders from Tehran. Such a model bears resemblance to Hezbollah in Lebanon, which was formed after the 1979 Islamic Revolution to “export” Iran’s ideology to the region.

Fully aware that the militias are a destabilizing force inside Iraq, the U.S. government has tried in recent years to pressure the Iraqi government to bring them under the control of the state. Former prime minister Haider al-Abadi tried to comply with the United States’ demand but failed. Even if parts of the new Iraqi government were fully behind such a move, it would remain problematic; the militias are largely under the unofficial control of Iran’s Islamic Revolutionary Guard Corps. They are a powerful tool for Iran to retain and expand its power inside Iraq.

The U.S. House of Representatives passed legislation in late November calling for sanctions to be imposed on two of the most powerful Iranian-backed militias. One of the militias is headed by Qais al-Khazali, a commander who was responsible for the deaths of five U.S. soldiers in Karbala, Iraq, in 2007 and was arrested by U.S.-led coalition forces. A similar bill is likely to be considered in the Senate. While such legislation irritates Iran, it does little to aid the Iraqi state in forcing the militias to obey the Iraqi Armed Forces, even though they are officially under the control of Iraq’s Interior Ministry.

President Donald Trump’s powerful political appointees are also trying to increase the pressure on the militias as part of the campaign against Iranian expansionism in the Middle East. Secretary of State Mike Pompeo and the U.S. Special Representative for Iran Brian Hook are calling for Iran to stop supporting militias in Lebanon, Syria, Iraq, Bahrain and Yemen.

This new emphasis on the militias reflects a bit of a shift. In recent months, the U.S. administration has focused its anti-Iran campaign on Iran’s ballistic missile proliferation in the region. Iran reportedly has transferred missiles to the Shia militias in Iraq. Now the administration is placing almost as much importance on bringing the militias under control as it places on reducing Iran’s ballistic missile caches. But not all Iraqis are supportive of such a move. Some who believe the militias are beneficial to security ask why the United States, which tolerated the PMUs when the militias were fighting ISIS, is now against them.

Washington is concerned that Iran will use the militias to target U.S. facilities and remaining American forces in Iraq as the conflict with Tehran escalates over the Trump administration’s decision to reimpose sanctions. Iranian leaders and Revolutionary Guard commanders have vowed to retaliate through their proxies, not only in Iraq but also in other parts of the Middle East.

High-level Iraqi sources say it is nearly impossible to bring the PMUs under the control of the state, precisely because they follow orders from Iran’s Islamic Revolutionary Guard Corps. This is even more of a reason why Iraq’s new government should not allow an Iranian operative to head the important post of interior minister. More broadly, many Iraqi leaders want a more sovereign nation, and the only way to move toward that goal is to marginalize Iran’s loyalists.