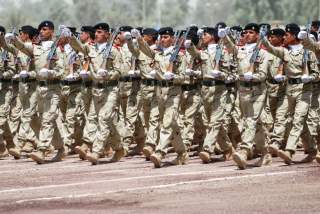 In the see-saw, roller-coaster battle for the future of Iraq, the recapture of Tikrit from the Islamic State of Iraq and the Levant  (ISIL) on April 2 was the Iraqi Government’s most dramatic accomplishment throughout the coalition’s nine-month campaign against the extremist organization. Tikrit, universally known as former Iraqi dictator Saddam Hussein’s hometown, was a city under the control and administration of ISIL ever since the group made its initial push across northern Iraq in June and July 2014. But it also happens to be a city that lies along the main route to Mosul, ISIL’s major stronghold in Iraq and the country’s second biggest city after Baghdad.  Retaking Mosul and expelling ISIL militants from the city would have been exceedingly difficult without first capturing Tikrit, an area roughly three hours south of Mosul. The Iraqi security forces, with vital assistance from U.S.-led air strikes and support from Shia militia units under the Popular Mobilization Units/Forces (PMUs), managed to liberate Tikrit after about a month.

The successful offensive in Tikrit was supposed to be the beginning of the end for ISIL in Iraq—a liberation that would demonstrate to the entire organization that the Iraqi army and police were getting far more capable on the battlefield, more confident in direct engagements with the militants, and more proficient in the logistics that are required to maintain a ground offensive for the long-term. Iraqi Prime Minister Haider al-Abadi certainly hoped that this would be the case. Unfortunately, it appears that the success of the Iraqi security forces in Tikrit was a one-time event.

After over four days of intense fighting on the ground and lackluster communication between Iraqi units in Anbar province and the leadership in Baghdad, ISIL militants managed to completely capture the provincial capital of Ramadi. Although ISIL has been attempting to take Ramadi for a year and a half, the group’s fighters were able to use their considerable strength in the Sunni majority west of the country to route Iraqi troops and police officers who were ill-equipped to resist a frontal incursion. As of Monday, May 18, ISIL was able to drive into the government quarter and hoist their black flag over the provincial capital building.

Even more disturbing than ISIL’s effective battle strategy—suicide bombers, car bombs, and heavy machinery were used to blast through the defensive perimeter—however, was the pathetic state of the Iraqi security forces responsible for defending the city from an encroachment. After first being expelled from downtown Ramadi and pushed to the al-Malaab area, regular Iraqi soldiers, police, pro-government Sunni tribesmen, and counterterrorism units were forced to withdraw once it became clear that reinforcements and an infusion of heavy weaponry from Baghdad weren’t coming quickly enough.  According to an account from The Washington Post, the soldiers who retreated from Ramadi left behind sixty vehicles that ISIL will attempt to put to good use during any government counteroffensive—vehicles that include Humvees most likely provided by the United States. Those who were unable to flee quickly found themselves surrounded, including 150 pro-government tribesmen setting up camp in the Anbar Operations Command building. To put it bluntly, Ramadi is in “total collapse,” as an Anbar Provincial Council member described it to Reuters.

The fact that the Iraqi Government will eventually retake Ramadi in conjunction with U.S. airpower is beside the point. What the situation in Ramadi over the last week indicates is that the Iraqi army is still incredibly strained and demoralized, even when confronting an extremist organization that has been degraded by the U.S. Air Force for the last nine months. It appears that the further away from Baghdad an Iraqi army unit is stationed, the more likely that unit will fold to the enemy or break apart. How much this development has to do with morale in the soldier or disorganization and bureaucratic inertia at the leadership level in Baghdad is difficult to know, but the result is the same: a clear victory for ISIL at a time when it needs a win.

Is there anything that the Iraqi Government and its international partners can do to fix this situation or at the very least minimize the consequences?  Is the deployment of additional U.S. trainers and advisers to the four operational training facilities in Iraq required in order to produce more recruits at a more accelerated pace (according to a CENTCOM press release, U.S. and coalition trainers have graduated 5,000 fresh Iraqi troops as of March 2015)?  Should U.S. war planners begin to reevaluate the rules of engagement by perhaps expanding the list of targets that U.S. aircraft are permitted to strike?  Is it time for Prime Minister Abadi to replace his senior military leadership—something that he has been willing to do in the past? Should the United States drop its resistance to the deployment of predominately Shia militias in Sunni-populated areas to make up for the shortfall in regular Iraqi army strength? Or would giving Shia militias more freedom to operate result in additional anger from the very same Sunni community that the Iraqi Government hopes to cajole?

The commanders and planners in the Combined Joint Operations Command are asking these very same questions every day. But with the quick fall of Ramadi and another case of mass retreat from the Iraqi army and police, it’s time for President Barack Obama and his national security team to ask these questions more frequently during meetings in the Oval Office. While the administration has a whole set of foreign policy priorities currently on its docket—a looming June 30 deadline for the Iranian nuclear negotiations, the civil war in Syria, the stalemate in eastern Ukraine, and instability in Libya to name just a few—the collapse of the Iraqi security forces in Ramadi should impart upon the United States and its Arab partners a greater sense of urgency to the anti-ISIL mission. If the Iraqi army is performing in much the same way as it did during its catastrophic and embarrassing mass desertion in Mosul nine months prior, it’s obvious that the strategy needs to be reassessed yet again.