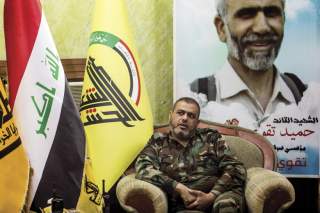 This isn’t to say we should throw reconciliation to the wind and be uncritical of Iraq’s conduct in fighting terror. Iraq should treat captive terrorists in accordance with international conventions, but our voice is limited in Iraq.

That said, a field commander in the Abbas Combat Division was aware of media reports about the Hashd, and stressed to us that “whatever you have heard, we do not torture captives.” Similarly, the commander of Saraya al-Khorasani spoke about “trials” for Sunnis who had supported “Daesh” after the war. We should be encouraged by these sentiments and continue to support partners in Iraq, who will be open to hearing how strengthened human rights are a key part of fighting terrorism.

Of course, since Saraya al-Khorasani were recently tipped by one Iranian MP to be the Iraqi version of the Iranian Revolutionary Guard, it's clear that there are many sides to the Hashd. At the end of a long discussion on Iraqi politics with al-Yasseri, I asked if Western investors would be safe to work in Iraq. “Of course,” he smiled. “You are safe here with us, is that not proof enough?” Could the Iran detente be spilling into Iraq?

It seems unlikely now, but in Iraq things can change fast. If someone had told me in 2014 that the nearly destroyed Iraqi army would now be advancing on Mosul, I would not have believed them. But current political chaos in the Green Zone shows that events in Iraq can move faster than either Washington or Tehran can predict.

What matters now is that the nascent alliance of Sunnis and Shia in Iraq has an Iraqi vehicle, and that right now this is the Hashd. The Iraqi government will strongly reject any attempt to heavily arm a new version of the Sahwa, and so far the National Guard plan for Iraq’s Sunnis has been rejected. Romantics of the Sahwa movement can complain about this, but it is the new reality. Meanwhile, in the current Fallujah operation, the Sunni Jumailat tribe are present under commander Jumaa al-Jumaili, alongside fighters from the powerful Albu Issa tribe. The town’s mayor, Eissa Sayer al-Issawi, from the Albu Issa tribe, has praised Sunni participation in the Hashd.

More pressingly, Iraqi politics is now fragmented and in total deadlock. But just as there are new, albeit strained Sunni-Shia relations in the war on ISIS, nothing is simple in Iraq. Radical cleric Sadr effectively backs PM Abadi’s reforms. IRGC ally Hadi al-Ameri has repeatedly negotiated with the Kurdish PUK over the disputed city of Kirkuk (and signed at least one major contract with a U.S. firm when he was a Minister). And Saraya al-Khorasani are clearly close to former PM Maliki. What is the lesson here? Perhaps it is that understanding internal political dynamics within sects and ethnicities is more important for preventing Iraq’s next crisis than understanding the difference between Sunni and Shia.

Robert Tollast is a security and political risk analyst based in London, who focuses on Iraq. He has worked on studies in oil and gas, transport and telecoms in Iraq and the wider MENA region. He has written over seventy articles on Iraq in publications including Foreign Affairs and Delayed Gratification Magazine. He blogs at Iraq Business News.