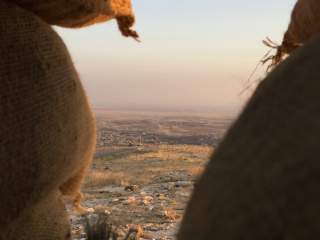 “The reason for the collapse of Nuri al-Maliki’s army and the conquest of Mosul in 2014 and other Sunni areas by Daesh [Islamic State] was the failure of the Iraqi government regarding Sunnis,” says Gen. Sa’adi al-Obaidi. Sitting in a small air conditioned caravan in the middle of a military base around thirteen miles east of Mosul, the general and several of his senior officers gathered around a table on July 15 to explain why they have joined Hashd al-Watani, or the National Mobilization Force. The unit of several thousand men has been training for two years to retake Iraq’s second largest city from ISIS, alongside Kurdish peshmerga forces in northern Iraq.

On July 9, the Iraqi army captured an airbase next to Qayyarah, forty miles south of Mosul. This offensive, led by the central government in Baghdad, has been closely coordinated with Combined Joint Task Force – Operation Inherent Resolve. On July 11, U.S. defense secretary Ash Carter said 560 more Americans were on the way to Iraq to “support Iraqi security forces as they move forward with the Mosul operation.”

However the operation to retake Mosul is hampered by the fact that many Sunnis fear the role of Iranian influence and Shia militias. Cities such as Fallujah and Ramadi were subjected to mass destruction in the house-to-house fighting used to clear them from ISIS. The key to the liberation of this large city will be the role of Sunni Arabs, as well as the Kurdish peshmerga whose front line in Bashiqa is only ten miles from Mosul city. There are an estimated 1.7 million refugees in the Kurdish region, many of them minorities such as Yazidis and Christians from around Mosul, and Sunni Arabs from areas of Iraq.

Hashd al-Watani was founded in 2014 and is led by Atheel al-Nujaifi, the former governor of Nineveh Province, which includes Mosul. Its base has been hosted behind the front line by the Kurdistan Regional Government, with which it enjoys close relations. Driving through the dry desert landscape towards the front line, it is still surreal to see Iraqi flags flying here, in an area where they are so rare. The Kurdistan region feels in many ways like an independent state, and its peshmerga forces have effectively defeated and defended against ISIS since 2014, while the Iraqi central government has faced continual problems governing the rest of Iraq. Many of the Kurds here have pegged their hopes for a post-ISIS Mosul on the Hashd al-Watani. They believe that the chaos unleashed during Maliki’s rule, and his pro-Shia policies, helped unleash ISIS, and they want a peaceful Nineveh Province as a neighbor, not sectarian extremism.

On Friday, when many of the young men who are refugees from Mosul and have joined the Hashd al-Watani were relaxing after Friday prayers, their senior officers provided a breakdown of the future they hope to carve out for their city. “This base we made two years ago. All people from Mosul—Shabak, Kurdish, Sunni, Christian, Shia—all of them came here for training, including Yazidi. Those men are ready to attack Mosul. We have more trainings, and it is not finished,” says Obaidi. The men asked that their names not be mentioned by the media, as many of them still have relatives living under Islamic State.

“We receive no support from the central Baghdad government. This camp was constructed at the initiative of Atheel Nujaifi in difficult conditions, on his own,” says one of the officers. The men wear different desert-camo uniforms, and an Iraqi flag and Hashd al-Watani flag stand behind them. Coffee and cigarettes are given out.

“Some of the younger men here had no training before. Some of us served in the last army or local police.” They often reference the “former army,” by which they mean Saddam Hussein’s army. It’s hard to read their feelings about Saddam, but the men seem to agree that in Saddam’s time their city functioned well without the extremism of recent years. “As a result [of the 2003 invasion] we are now under the rule of Iran. that’s the problem. Because of Bush and Blair, Saddam was overthrown and Iran entered,” says one of the officers. It is a bit a of a reversal for them to be running a small brigade-sized unit under the protection and in alliance with Kurds, when for years it was Saddam’s army that brutally persecuted Kurds and destroyed thousands of villages in these areas in the 1980s. Times change, and the enemy now are the Shia militias and ISIS.

“The central government [before 2014] mistreated the Sunni population. Iran is also playing a role. There is Iranian influence. They treat Sunnis badly,” says the general. “We will do our duty during the liberation and then we will see. We don’t know what will happen after it. We don’t want to predict.”

But these old soldiers, who were in their teens and early twenties during the Iran-Iraq War and Gulf War, and who have seen thirty-six years of turmoil and conflict since 1980, are reticent to play at politics. “We are soldiers and fighters, not politicians.” They feel the international community, which works directly with Baghdad, should give Hashd al-Watani more support. “We need all kinds of aid, including information, guns, weapons and they don’t give us anything.”

This may be changing. On July 12, the KRG’s Minister of Peshmerga Affairs Karim Sinjari signed a memorandum of understanding in Erbil with Acting Assistant Secretary of Defense Elissa Slotkin, which will provide for direct military and financial support for the peshmerga. At the moment, that doesn’t mean anything concrete for these men, but it may mean in the future that their interests are taken into account.

“The time to retake Mosul is coming soon,” says General Obaidi. “The people in Mosul don’t like ISIS and they are fighting ISIS. People have nothing to eat. In Mosul people in the area of Zor put up the Iraqi flag. It is late in the day, we cannot repeat the problems in Fallujah and Ramadi, and we place our trust in God not to repeat those tragedies in Mosul,” he says.

The hope that local people in Mosul will overthrow ISIS, as ISIS is increasingly pressed on the front line, is one that many former Mosul residents cling to. Nujaifi has gone on social media and called for a popular uprising. However, on the front line at Bashiqa, there has been an increase in civilians fleeing Mosul during the night, and not taking up arms to fight ISIS, who the civilians rightly fear.

The Hashd al-Watani men stress their close relations with the minority communities that once lived in Mosul. When ISIS arrived in the city in June of 2014 it began persecuting Christians, who fled the city for refuge in Kurdish areas. Then it turned on Yazidis in August of 2014, committing what has been called genocide by the UN in nearby Sinjar. To prove their point, they sent for a Christian soldier. A young man of just over eighteen entered the room. He was from Hamdaniya, an area south of Mosul, before ISIS came.

The men say that articles claiming ISIS had support from former Baathist officers are untrue. They argue that much of the problem with ISIS stems from foreign support it received. One Hashd al-Watani officer says he stayed in Mosul after June when ISIS arrived. “I saw French, German, Russian, Chechen volunteers and leaders. I escaped Mosul only after three months of ISIS rule.”

Plans for Mosul’s liberations have been in the works since early 2015, but the coming months will likely be a turning point. Not far from the Hashd al-Watani base, the peshmerga front line runs along a long ridge that overlooks the flat plains around Mosul city. This whole area once held incredible diversity of cultures, with an ancient church behind the front line under Kurdish protection, Yazidi villages, Shabak and Kaka’i minorities, and many Christians. ISIS destroyed that fabric of life, but the alliance between Kurds, Yazidis and the diverse groups in the Hashd al-Watani seem to represent a return to the pre-2014 times. In the view of many people here on the front line, allowing the Iraqi government and any Iranian-influenced Shia militias to enter Mosul would be a disastrous mistake.

Gen. Bahram Yasin, the Kurdish peshmerga commander of forces on the Bashiqa front, says his men are awaiting orders from Erbil to push forward. He agrees with the Hashd al-Watani that it would be unacceptable to have Shia militias such as Hashd al-Shaabi involved in Mosul. He supports a broad coalition, alongside the Americans and Western powers who have played a role supporting this front line, and the incorporation of the different minority groups in the operation.

Over the last year, a small Turkish military presence has been aiding the war against ISIS by providing artillery support. This has been essential in saving lives along this front line, as ISIS mortar positions are often subject to efficient and effective counterfire from the Turks. The Turkish presence is also related to support for Hashd al-Watani. Although the attempted coup in Turkey on Friday night momentarily called into question Turkey’s stability, the Turks continue to have an interest in recreating a stable Mosul. General Bahram says the key to stabilizing Mosul after ISIS will be creating a strong border between Iraq and Syria. “This is a world war” against extremism, he says, and Mosul is a key to defeating it.