Iron Dome: Neither a 'Bluff' nor the 'End of Rockets' 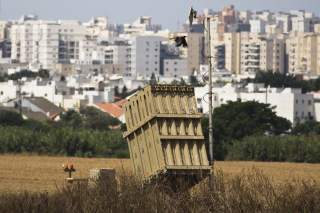 Israel introduced its Iron Dome interceptor system in 2011 in response to rocket and mortar attacks from Hamas in Gaza and Hezbollah in Lebanon. The technology attracted international attention during the country’s 2012 and 2014 Gaza conflicts. However, it also prompted a controversy regarding its effectiveness.

Each Iron Dome battery includes a radar, command module, and several interceptor launchers. The system detects incoming rockets and estimates their impact points. If the rockets threaten the area being defended, the battery launches interceptors to shoot them down.

Five Iron Dome batteries operated during Israel’s 2012 Operation Pillar of Defense against Gaza. They claimed 421 rocket interceptions, or 85 percent of the rockets engaged. Proponents consequently declared the system a “game-changer that heralds the end of rockets.”

Similarly, nine batteries operated during 2014’s Operation Protective Edge. They reported 735 rocket and mortar interceptions, or 92 percent of those engaged.

However, because intercepting rockets and missiles is difficult, any system’s reported success faces much skepticism. For example, analysts cast doubt on the Patriot system's 1991 Gulf War interception claims. Saudi Arabia’s recently claimed interceptions of Houthi missiles are likewise being questioned.

For Iron Dome, public videos of interception attempts are not detailed enough to confirm the interceptors destroyed the rockets’ warheads. Critics therefore questioned Israel’s claims. They argued the effective interception rates may have been only 30 to 40 percent, or even below 10 percent, making them largely a bluff.

(The batteries’ occasional odd behavior does not help their case. In 2016, one fired at mortar shells falling outside of Israel. Last month, another launched ten interceptors at machine gun bullets from a Hamas military exercise.)

Iron Dome’s supporters have responded by comparing property damage rates among different conflicts. During the 2006 Second Lebanon War against Hezbollah, Israel had no interceptors and reported 6.7 property damage insurance claims per rocket on average. The rate dropped to 2.9 in 2012 and 1.2 in 2014. Supporters argue this steep drop after Iron Dome’s 2011 arrival proves its “ironclad success.”

However, that comparison ignores Operation Cast Lead in 2008–2009, which saw just 2.4 damage claims per rocket. With that operation included, Iron Dome’s 2011 debut coincides with a slight increase in damage rates, not a decrease.

By contrast, Hamas mixes its Grads with smaller Qassam rockets. Thus, for example, the average rocket warhead weight during Cast Lead was only about half that of Second Lebanon.

One way to compensate for these differences is to scale the damage rates to reflect “standardized” 20 kg warheads. The rates then become 4.4, 3.9, 4.3, and 1.5 damage claims per 20 kg warhead, respectively. That sequence suggests Iron Dome’s influence was minimal in 2012 but substantial in 2014.

My newly-published research investigates these trends in more detail. It analyzes publicly available data regarding rockets fired and losses inflicted.

The study estimates Iron Dome intercepted 59 to 75 percent of all threatening rockets during Protective Edge in 2014. (“Threatening” means the rockets either struck populated areas or were intercepted.) Those estimates include both battery-defended areas and undefended areas. The claimed 92 percent interception rate for defended areas therefore seems plausible. The interceptions likely prevented three to six Israeli deaths, 120 to 250 injuries, and $42 to $86 million in property damage.

By contrast, interceptions during 2012’s Pillar of Defense seemingly blocked less than 32 percent of threatening rockets, perhaps much less. They prevented at most two deaths, 110 wounded, and $7 million in damage. As well, the number of rockets reported hitting populated areas seems understated, while the number threatening them seems overstated. The operation’s interception rate therefore may have been markedly less than the reported 85 percent.

These results suggest Iron Dome’s 2012 value may have been largely symbolic, but by 2014 it had become very influential. However, the system does not mark “the end of rockets;” interceptors can be countered simply by firing larger salvos. Hamas has accumulated over 10,000 rockets in strife-filled Gaza. Hezbollah has 120,000, enough to severely strain interceptors during any future “Northern War” between Israel and Hezbollah.

The United States also has a stake in Iron Dome’s performance. It has contributed $3 billion to date toward Israel’s missile defense efforts, and Congress just approved a record $705 million for 2018. As well, the U.S. Army may buy the system for short-range air defense. (Only Azerbaijan has purchased it so far.)

Michael J. Armstrong is an associate professor of operations research at Brock University. He studies naval and land-based missile combat. His study, “The effectiveness of rocket attacks and defenses in Israel,” appears in the Journal of Global Security Studies.

Image: A recently located Iron Dome battary can be seen near the southern Israeli city of Ashkelon outside the Gaza Strip June 7, 2015. Israeli aircraft struck the Northern Gaza Strip on Sunday and Israel closed the border crossing with the Hamas-controlled territory after a rocket attack on Saturday claimed by the Omar Brigades, a Palestinian group that supports Islamic State. REUTERS/Amir Cohen​