An ISIS–Al Qaeda 'Frankenstein' Could Be On Its Way 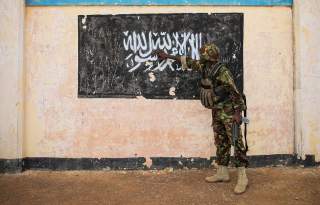 The Islamic State terrorist group, which emerged as the trendsetter of the global jihad in 2014, is past its prime and glory. Currently, it is on the defensive, fighting for its survival, unlike the 2014 offensive when it was expanding territorially, shocking the international community with its unapologetically brutal videos and flaunting its cash to attract foreign jihadists in the thousands.

ISIS has been on the receiving end of significant territorial losses in Iraq and Syria, travel restrictions dissuading would-be foreign fighters, dwindling finances and high casualty rates among its foot soldiers. The terror group’s social media propaganda arm, Al-Hayat, is not even half as active as it was last year.

Meanwhile, Al Qaeda central, which remained the undisputed leader and champion of global jihad until 2014, is in an abysmal state of affairs in Afghanistan and Pakistan. Since Osama bin Laden’s death, Al Qaeda has lost its mojo and it has become a jihadi pariah. Only fifty to sixty members and operatives of Al Qaeda are in the Af-Pak region; the rest have been killed or arrested, or have relocated to the Middle East. Al Qaeda has not carried out any large-scale terrorist attacks in the last seven years. The terror group has been reduced to a footnote in annual threat assessments. Currently, it is depending on its Yemeni branch, Al Qaeda in the Arabian Peninsula (AQAP), for funding and its Taliban allies for shelter, protection and movement.

This fluid situation has once again rendered the leadership of global jihad uncertain. Additionally, these developments have generated heated debate about the possible implications of ISIS’s implosion and Al Qaeda’s debilitation. More importantly, what fallback option will ISIS take: migrating to its so-called wilayat beyond the Levant, decentralizing its operation and becoming an ideological movement imitating Al Qaeda’s post-9/11 strategy, or seeking a merger with Al Qaeda?

Against this backdrop, on April 18, Iraq’s Vice President Ayad Allawi disclosed that “discussions and dialogue” had taken place between representatives of ISIS leader Abu Bakr al-Baghdadi and Al Qaeda chief Ayman al-Zawahiri. However, Allawi did not specify what the purpose of this meeting was.

Likewise, on April 26, during a security conference in Moscow, the head of Russia’s Federal Security Service, Aleksandr Bortnikov, pointed out that faced with defeat in Iraq and Syria, the IS and other militant groups were in negotiations to develop a new large-scale terrorist network globally. Bortnikov maintained that both groups were developing new strongholds ranging from Afghanistan to Yemen, and well into the African continent.

These two claims make Zawahiri’s recent audio message—urging jihadist groups, among other things, to unify—very meaningful. Zawahiri told mujahideen, “Unite and close your ranks with your Muslim brothers and mujahideen not just in Sham [Syria], but the entire world, for it is a single Crusader campaign being waged against Muslims the world over.”

Zawahiri’s audio statement appears to be an indirect olive branch to ISIS for a possible merger, to fight a common enemy. This is not the first time that Zawahiri has issued such a statement, but what differentiates it from previous statements is the meeting in Iraq between representatives of the two militant organizations.

It is quite frightening to imagine the implications of Al Qaeda and ISIS’s reunification for global peace and security, and what the two could achieve through a merger. At this juncture, the possibilities of cooperation outweigh those of confrontation. The ideological similarities between Al Qaeda and ISIS are far greater than their differences.

For instance, both Al Qaeda and ISIS espouse similar extremist worldviews: they are Sunni supremacists and want to create a Sunni global caliphate. Similarly, both want to fight the West (the “far enemy”) and apostate Muslim regimes (the “near enemy”). Both subscribe to global jihad and reject the existing global world order. And both believe that a war is underway between Islam and the West, and that Islam is under threat.

The major differences between the two old jihadi allies entail leadership, strategy and the hierarchy of priorities. First, the two differ vehemently over who is the true successor of Osama bin Laden—Zawahiri or Baghdadi. The natural death or killing of one of the two leaders would make the possibility of a reconciliation and merger even more likely.

Second, they have different military strategies for realizing the utopian Muslim caliphate. ISIS advocates a preemptive offensive approach to jihad, which envisions creation of a proto-state at the beginning. On the contrary, Al Qaeda follows a gradualist approach that focuses on defeating enemies and creating an environment conducive (winning hearts and minds) for the creation of a global Muslim caliphate. In Al Qaeda’s utopian estimation, the caliphate, once it has been achieved, cannot fall: it is the invincible epitome of Islam’s global dominance as well as the purest form of Islam. Lastly, Al Qaeda, unlike ISIS, is not in favor of brazenly violent and brutal tactics targeting Shia and other religious minorities.

If the conditions that gave birth to the monsters of ISIS and Al Qaeda are not addressed, the international community might have to fight a new jihadi Frankenstein, born from Al Qaeda and ISIS’s marriage of convenience. This is why a robust ideological counternarrative, conflict stabilization in Iraq and Afghanistan, and a viable political solution to the Syrian Civil War are central to defeating the jihadist by-product of these conflict-torn areas.

The perennial dilemma of the global fight against terrorism involves making promising starts but failing to finish the job through mature conflict termination and post-conflict political reconciliation and stabilization. The upper hand against ISIS, and the opportunity created by Al Qaeda’s depletion, make for another promising start, but can it be converted into a strategic advantage to win the war, instead of just winning the battle?

Adbul Basit is an Associate Research Fellow at the S. Rajaratnam School of International Studies (RSIS), Singapore. He can be reached at [email protected]

Image: A soldier of the Kenyan Contingent serving with the African Union Mission in Somalia. Wikimedia Commons/AMISOM