ISIS Is Adapting Its Strategy. Obama Should Too. 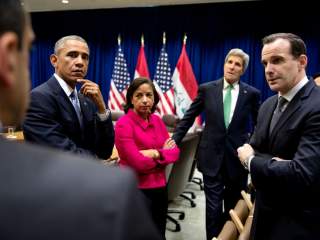 Back in June I asked if the United States had an anti-ISIS strategy. The conclusion was straightforward: Yes, the Obama administration has a clear and defined strategy, but it’s not working. Specifically, America’s focus on military operations without fully backing or resourcing a governance plan will ultimately end in failure, regardless of how many bombs fall.

Since that writing, the context of the fight against ISIS has changed, thus requiring another exploration of the strategy’s efficacy. ISIS’s attacks in Egypt, Beirut and Paris have changed the game for many in the West. The United States renewed its pledge to destroy ISIS, vowing to increase cooperation with France, the United Kingdom and Germany. At the same time, a downed Russian plane over Turkish airspace threatens to worsen relations between Russia and the West, which will add a complication to defeating ISIS.

So with all that, plus a refugee crisis continuing to spiral out of control, is the strategy working? It’s safe to say that, if the desired end continues to be “degrade and ultimately destroy” ISIS, then the answer is no. ISIS’s ways have changed over the past year, but the strategy to defeat the enemy has not. How should the strategy be altered?

Let’s start with the new context, where there is both good and bad news. The bad news is that the recent attacks show that even though ISIS continues to do most of its damage in the Middle East, it now is at least aiming to inspire coordinated, brutal attacks in the West. European hotspots will continue to be targets. After all, it isn’t terribly difficult for ISIS to hit them.

American targets, on the other hand, will be harder to attack. A successful operation in America requires getting past the post-9/11 anti-terrorism intelligence and security architecture that keeps the homeland relatively safe from terrorist strikes. So while there may not be a “credible and specific” threat against the American homeland today, it is reasonable to assume that a Beirut- or Paris-style attack in the United States is a goal of ISIS toward which planning and resources are being dedicated.

The good news is that, as Oliver Roy points out in the New York Times, ISIS has reached its “strategic limits.” As he states:

“ISIS’s reach is bounded; there are no more areas in which it can extend by claiming to be a defender of Sunni Arab populations. To the north, there are Kurds; to the east, Iraqi Shiites; to the west, Alawites, now protected by the Russians. And all are resisting it. To the south,  neither the Lebanese, who worry about the influx of Syrian refugees, nor the Jordanians, who are still reeling from the horrid execution of one of their pilots, nor the Palestinians have succumbed to any fascination for ISIS. Stalled in the Middle East, ISIS is rushing headlong into globalized terrorism.”

With that being true, we know that ISIS will have trouble conquering more territory. The chances of it winning another major propaganda victory by reclaiming new territory is likely gone. Enemies of the group now know what it wants to do next: conduct terror operations around the world.

With a new context, then, should come a new strategy. Yet, President Obama has “announced no new steps” to defeat ISIS. Instead, according to one report, “the president said the U.S. will continue to intensify ongoing military efforts against the terrorist group.” Even after the attacks, the president continues to back his policy of containment via airstrikes and regional ground troops. Seeing as ISIS is now in at least eight countries where it “capitalizes on poor governance,” it’s hard to say that containment is working. Yes, not all the countries are strategically significant, but it does show the ideology’s ability to spread and threaten other global players.

What to do, then, about ISIS? If you’re going to defeat the group, regional leaders will need to 1) provide an alternative to ISIS’s governance; 2) remove ISIS from those areas and replace it with the governance alternative; 3) hold on until the group’s ideology becomes a fringe belief once more; and 4) secure the long-term participation of regional allies and partners.

This is just one of many proposals. Conservative and liberal options have yet to be helpful, and many—but not all—of the anti-ISIS policies outlined by those vying for President Obama’s job strain credibility.

It would be understandable for some to think there is nothing that can be done. But let’s face it: we know what’s needed. This fight cannot be won without infantry to overwhelm and take out ISIS. As part of this effort, the war in Syria has to end. A long-term governance plan must be created, put in place and seen through. And while the United States would have to take part of the long effort to get this right, regional allies—some of whom do not want to take this fight seriously—will have to play a major part in it.

This is the debate we need now. We know what ISIS wants and how it aims to get it. We actually know how to stop ISIS from achieving its goals. What we do not know is if we have the clout to get our Middle East partners on our side for a long commitment; if we deem ISIS a big enough threat to the United States and to our partners and allies to warrant such costly attention; and if the United States has the staying power to see the end of ISIS once and for all.

In the end, the context of the ISIS fight has changed. What isn’t clear, however, is where the ISIS threat fits in our national security and foreign policy context. That’s what we need to figure out first.