ISIS, Air-Sea Battle and the Pivot 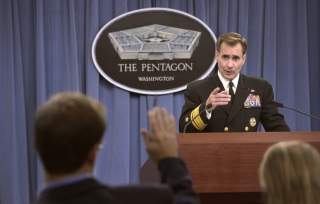 Editor’s Note: Please see below an excerpt from Mr. Colby’s debate with TX Hammes concerning the Air-Sea Battle concept. You can read the entire text of the piece here.

The combination of growing Chinese military power and Beijing’s increasing assertiveness has refocused attention on East Asia and the possibility of conflict after a decade of emphasis on the Middle East and stability operations. Indeed, while China’s economic expansion appears to be hitting some turbulence, even a China that grows more slowly—as in 7 percent rather than 10 percent per annum—will still be able to continue to fund its impressive array of military modernization programs, programs that, if current trends continue, will allow it to effectively conduct serious military operations throughout Asia.

A China that can undertake such military operations will also be a China that will be able to mount a formidable—and in some cases dauntingly formidable—challenge to the military power of the United States and its allies in the region. This is no coincidence, as China’s military modernization programs are clearly designed, according to the U.S. government’s own assessment, to “counter third-party [read: U.S.] intervention” in disputes it cares about. If the Chinese can achieve the military upper hand over the United States in the Asia-Pacific, the U.S. network of alliances and partnerships—and the regional order it has underwritten—would no longer count for much beyond ceremony in military terms.

The Pentagon has taken note, and is vigorously pursuing a spate of initiatives in an attempt to preserve the U.S. margin of advantage over sophisticated adversaries such as China. The oft-discussed AirSea Battle initiative and the related Joint Operational Access Concept, while careful to avoid explicitly mentioning China, are obviously applicable to China (as well as other potential adversaries wielding sophisticated military systems) and senior Defense officials regularly talk about the threat posed by Chinese anti-access/area denial systems (A2/AD). So you do the math.

The basic point of AirSea Battle, and presumably other methods of overcoming the challenges to American power-projection capabilities (bear in mind that AirSea Battle is only one possible way to do so), is to “preserve the [United States’] ability to defeat aggression and maintain escalation advantage despite the challenge posed by advanced weapons systems.” The initiative’s essential way of doing that—its "central idea"—is to “develop networked, integrated forces capable of attack-in-depth to disrupt, destroy and defeat adversary forces.” In layman’s terms, it envisions developing a highly sophisticated military posture capable of going deep into enemy territory to get at the kinds of advanced missiles, command-and-control systems, and the like that threaten U.S. power-projection capabilities. The idea is to allow our battle network of planes, ships, satellites, cyber assets, submarines, missiles and the like to prevail over an opponent’s battle network. This capability, it is believed, will give the United States greater leverage in disputes with countries like China—whether such disputes involve actual shooting or just the threat of it.