ISIS Is Coming: Why Militias in Libya Need to Unite—And Fast 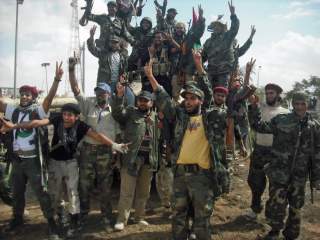 There is no proven playbook for negotiating the end of a multipolar civil war. The conundrum is further complicated when the negotiator has limited leverage and many parties genuinely believe they can secure their interests better through fighting than compromise.

Grasping at straws after over a year of little progress, Bernardino Leon, the top UN Negotiator for Libya, unilaterally announced on October 9 the ministerial list of a Government of National Agreement (GNA) meant to reign in the militias and stabilize Libya. Lacking a pre-existing signed accord from the various Libyan factions, the move is highly unorthodox. It allows opponents of the negotiations to claim that the GNA is akin to outside intervention. Like a last-minute Hail Mary pass, a long shot likely to backfire, it might nonetheless have been Leon’s best chance to get an agreement before the October 20 hard deadline.

Unsurprisingly, figures from both sides—the Tobruk-based House of Representatives (HoR), Libya’s internationally recognized government, and the Tripoli-based General National Congress (GNC), the country’s previous legislature—have already begun denouncing the move. In the ensuing chaos, it is possible that violent clashes will break out between groups who support and those who reject a deal. Additionally, opportunists might use the chaos to seize key pieces of infrastructure. Furthermore, in an attempt to derail the negotiations, an attack on Western interests in Libya by jihadists or the anti-negotiation Steadfast Front looks increasingly possible.

Why Can't They All Just Get Along?

Reaching a peace accord to end Libya's fifteen-month-old civil war is proving harder than trying to save a marriage after the divorce lawyers have divided the assets and made the infidelities public. This is a political environment in which the Libyan branch of the Islamic State (IS) wishes to operate—perpetual political manoeuvring with no coalition of actors strong enough to encroach on its territory or check the expansion of its smuggling, recruitment, and terrorist networks. Rather than trying to coax an anti-IS coalition to life, the key novelty of Leon’s proposed ministerial list is the relative absence of GNC supporters, largely due to the GNC’s inability to advocate for its candidates. The GNC negotiating team failed to agree upon a list of names to recommend to the UN, and its internal voting session in Tripoli was suspended after unknown assailants struck the conference hall with RPGs.

Nonetheless, Leon smartly wishes to draw the GNC back into the fold and has therefore offered a key position to a member of their dialogue team. However, this is unlikely to be enough to convince hardline GNC supporters that their interests are safeguarded by the GNA lineup. Instead, they might go rogue and back various shades of Islamist spoilers, with whom they are already tenuously aligned.

The proposed government can therefore be viewed as a balance between the Misratans and the wing of the Federalists who support Ibrahim Jadhran (the chief of the Petroleum Facilities Guard in Libya’s oil crescent). The Misratans represent the bulk of military power in western Libya, as well as the key militias that could tackle IS, while Jadhran’s Federalist supporters are the only force able to secure the stability of oil export revenues from the east of Libya. Both of these parties quickly announced their support for the UN proposal. The Muslim Brotherhood has also endorsed the plan, although more hesitantly.

The majority of other major local councils and militias, however, have denounced the proposal in the strongest terms. Paradoxically, the HoR, which stands to gain the most from a successful GNA, held a session on Monday, October 12 to vote on the proposed government but came to no conclusion.

Despite the political twists and turns, it seems the international community has taken its eye off the ball. No coherent plan to tackle the IS threat in Sirte has materialized, even from the political factions that still back the UN process. IS breeds on insecurity and aids Islamist spoilers such as the Steadfast Front, all of which hope to obstruct the peace process. This negative feedback loop must somehow be broken.

In an attempt to derail even the minimal progress being achieved at the negotiating table, IS has enlarged the geographical scope of its operations in Libya with an attack on October 1 against a checkpoint at the entrance of the Sidra oil terminal—190 km East of its home base in Sirte. While the death toll was not high, the symbolic significance was great. Although IS' move against the federalists and the oil ports is meant to sabotage the negotiations and provoke fragmentation within the existing blocs, it could also cause a reorganisation of militia alliances which might lead to the creation of an anti-IS coalition. This positive realignment could be coaxed by sage international policies.

Within the Tobruk faction, tensions between the HoR and they man they appointed Commander-in-Chief, General Khalifa Haftar, have approached the boiling point, due in no small part to Haftar's ever-more evident ambition to take a portion of the country by force and sideline the HoR. His actions are proving divisive and destabilising, and Haftar’s former partners are abandoning him in droves, some of them to side with their former enemies and definitively evict IS from Derna.

Meanwhile, in Western Libya, the previously Haftar-aligned Warshefana forces joined with their former opponents, the Misratan militias. This newfound alliance might lay the foundation for an anti-extremist operation to regain control of Tripoli.

These shifting alliances demonstrate that moderate Islamist and anti-Islamist brigade commanders might be considerably more willing to work together against IS than the bickering political echelon that appears unlikely to make the sacrifices necessary for building a broad enough consensus for the “unity” government.

Such pragmatism from the militia commanders hasn’t come a moment too soon. If the political stalemate persists and factionalization worsens, IS will only be able to inflict greater damage and gain control over larger swaths of territory.

The only feasible path towards minimizing the IS threat lies in the kind of cooperation that is now taking place between the Warshefana and Misratan militias and others. If key militias supporting opposing political blocs can show more vision than high-level political leadership and put aside their differences to confront the common enemy, both the security and political situations stand to benefit.

Cooperation could prove to be a necessary first step towards rebuilding trust in the wake of a faltering negotiations process, and perhaps even serve as a way to begin reordering Libya's unwieldy security sector. In fact, if the top-down UN attempts to forge a new government definitively fail, maybe a new round of talks could bring together sympathetic militia leaders and attempt to build a political process capitalising on their successful operational collaboration against IS.

Jason Pack is President of Libya-Analysis.com and a Researcher of Middle Eastern History at Cambridge University.

Editor’s Note: This is an updated version of an article that was previously published by the Centre on Religion & Geopolitics based in London. A link to the original is available here.