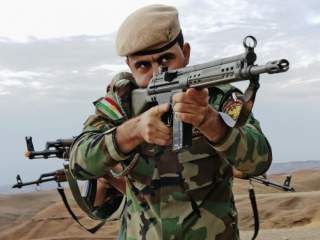 A Kurdish proverb states that “Kurds have no friends but the mountains.” Over the centuries, the Kurdish nation has suffered at the hands of competing great powers, who play factions of Kurds against each other in regional struggles. In an effort to escape such exploitation, the Kurds have frequently fled to fringe areas outside of government control. This traditional escape is referred to as “going to the mountains”—a phrase that’s more than just a euphemism.

However, the rise of the Islamic State (IS) may lay the groundwork for a Kurdish state by soothing the Kurds’ factional divisions. It has also helped raise Kurds’ autonomy within their host countries.

The threat of IS has caused the Kurds of Turkey, Iraq and Syria to put aside their differences. The most striking indication of this consolidation occurred in 2014, when troops from Iraq’s Kurdistan Regional Government (KRG) passed through Turkish Kurdistan to support Syrian Kurds fighting against IS.

The operation surprised observers because it signified an unprecedented level of collaboration between two rival leaders of the Kurdish national movement: Masoud Barzani, the president of the KRG, and Abdullah Öcalan, leader of the Kurdish-Turkish militant group, the Kurdistan Workers’ Party (PKK). For decades, Barzani and Öcalan have competed, sometime violently, to secure the most attractive strategy for their fellow Kurds to achieve national independence.

The Kobani operation was only one example of Kurdish factions cooperating in the face of IS. In Iraq, fighters belonging to Barzani and to his domestic rival, Jalal Talabani, collaborated to combat IS. Elsewhere, Barzani and Talabani’s forces fought IS with the help of the PKK. Iraqi Kurdistan received displaced Syrian Kurdish refugees, and Syrian and Turkish Kurds helped Iraqi Kurds to defend their territory. Moreover, the United States has established a liaison center in Iraq to orchestrate cooperation among various Kurdish factions.

In Iraq and Syria, military victories have coincided with advancing independence. In Iraq, Baghdad has been caught off guard by IS, and its lack of resources has forced it to reluctantly allow the KRG to assert autonomy. In Syria, the central government’s implosion has given the Kurds the space they need to establish self-governing enclaves.

Unlike their fellows in Iraq and Syria, Kurds in Turkey have not advanced their claims for autonomy. Ankara retains firms control throughout the country compared to Damascus and Baghdad. In the midst of the war against IS, Ankara and the PKK have resumed hostilities, and the Turkish government alleges that the PKK is working with IS. Ethnic skirmishes have broken out across the country, and the Turkish public’s sentiment towards Kurdish nationalism has dropped dramatically.

The chaos that has facilitated Kurds’ advances in Syria and Iraq, however, may be coming to Turkey. True, IS will not be able to wrestle large swaths of territory from Ankara, as it has done in Iraq and Syria. But the group, which is well-embedded in Turkey, certainly has the ability to bring a burning, persistent, low-level conflict into the country.

Moreover, IS has growing motivation to enter Turkey. It has made clear in its magazine Dabiq and in propaganda videos such as “Turkey and the Fire of Racism” that Turkey is a prime target. Its battles with PKK affiliates in Syria have already caused the group to strike at Kurds in Turkey. IS has an additional reason for entering Turkey: by attacking foreigners and religious minorities, including Alawites, IS may be able to lure less radical Turkish Islamists into its ranks.

If IS increases its presence in Turkey, this would catalyze other armed conflicts along pre-existing societal fault lines, most notably between secular and religious groups, and between Kurds and Turks. Turkey could descend into a level of widespread violence similar to that of the 1980s, only now with the twist of the presence of a major international terrorist organization within its borders. In this setting, Ankara would be forced to acquiesce to Kurds’ increasing assertiveness in the face of the IS threat.

IS has advanced the Kurds’ intergenerational struggle to establish their own country. Regardless of when exactly such independence ultimately occurs, Kurds will emerge from this crisis stronger than before, and they will have more power when negotiating for autonomy with central governments.

There are several obstacles, though. First and foremost, internal divisions remain a serious impediment. This is the case for Kurds living in different countries, especially between Barzani-aligned Kurds in Iraq and Öcalan-aligned Kurds in Turkey and Syria. It is also the case for Kurds within the same countries. Within the KRG, for instance, Barzani continues to face domestic and international criticism for ruthlessly marginalizing his political competitors.

Second, in order to become a member of the international system, the Kurds need other countries to support their efforts to form a nation-state. They need a foreign benefactor, which is difficult in a region where governments want to avoid encouraging ethnic secession movements.

Third, Kurds need a military. Without a genuine army, it does not matter how skilled Kurdish fighters are, or how much foreign supplies and training they receive. They will forever be on a secondary war footing when compared to existing states with robust military apparatuses.

IS complains that the map of the Middle East artificially divides the region’s populations. It has declared that its caliphate overturned the Sykes-Picot Agreement, a secret accord from 1916 between France and Britain that helped establish current national borders.

But IS will not be the beneficiary of this geopolitical reconfiguration. With its refusal to acknowledge the international system, IS will eventually be destroyed, replaced or radically altered. The ultimate beneficiaries will instead be those who want to work within the international system, and who can take advantage of the current chaos to redraw the maps in their favor. The Kurds know this. If they act with care, they will be able to form their own country and finally come down from the mountains.

Egemen Bezci is a Doctoral Researcher at the University of Nottingham, focusing on secret intelligence cooperation between Turkey and the West.