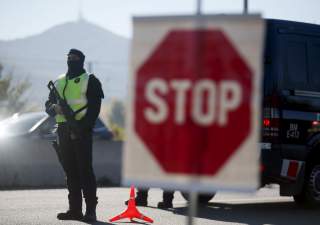 On Thursday, August 17, Spain became the latest country in the West to live through a crude but deadly terrorist attack perpetrated by a group of jihadist-inspired individuals.

The modus operandi of using a large van to strike Las Ramblas, a central tourist spot packed with people in the heart of Barcelona, is nearly identical to acts of terrorism that have occurred in France, Germany, the United States, the UK, and Sweden over the past year-and-a-half. In each case, a radicalized or psychologically distressed individual hijacks or rents a vehicle, waits for an opportune moment for a vulnerable soft target, and turns that vehicle into a deadly weapon by deliberately running people over on the sidewalk. For a terrorist, killing people with a car in an isolated attack is a lot less dramatic than a series of coordinated and synchronized suicide bombings on mass transit systems planned over a period of months. But ramming attacks have the benefit of being very easy to carry out; indeed, running pedestrians over with a car does not require any particular knowledge, skill or intelligence.

Terrorism in our current age is no longer defined by the terrorist cell meeting halfway around the world in a safe-haven, plotting a spectacular attack months and years in advance. Instead, the Islamic State has made terrorism easy for anybody to conduct. As ISIS’s former chief operational planner and spokesman, Abu Muhammad al-Adnani, implored to ISIS’s pack of recruits in Western Europe in 2014 and again in 2016, you don’t need to travel to Syria and gain battlefield skills to become a valuable member of the Islamic State’s community. All you need to do is pick up a knife and slash a police officer or hijack a car and run over pedestrians on the sidewalk. No expertise on Islam is required, just a willingness to kill innocent people in the name of the caliphate.

Before Barcelona, there was Nice, France. During Bastille Day celebrations in the summer of 2016, a Tunisian-born extremist drove a large delivery fan into crowds of people in the city preparing to celebrate the festivities. The truck drove down the walkway of the Promenade des Anglais, hitting any man, woman or child that happened to be standing in the way. By the time police neutralized the attacker, eighty-six people were killed, France was in shock, and investigators were forced to endure the criticism that often comes from failing to “connect the dots.”

A similar vehicular attack occurred in Berlin six months later, when yet another Tunisian extremist who settled in Germany hijacked a heavy truck after killing the driver and drove it into a Christmas market in Berlin. While the attacker was eventually shot and killed by Italian police less than five days later, the massacre in Berlin resulted in the deaths of fourteen people whose only crime was shopping for the holiday. Four months after events in Germany, the same thing occurred in Stockholm, where a failed asylum seeker plowed a car into a department store. Five people were killed in that attack, one of the worst acts of terrorism that the normally tranquil Nordic nation has seen in its modern history.

Unfortunately, acts of terrorism that include vehicles are only part of the story. The United States in particular has been susceptible to the kinds of spontaneous violence that has proven to be incredibly hard for law enforcement to stop. The December 2015 shootings in a San Bernardino office building by a husband and wife team; the mass shooting at the Pulse Nightclub in Orlando, Florida by a single gunman; and the multiple improvised explosive device explosions in New York City and New Jersey from an ISIS and Al Qaeda supporter in September 2016 are all part of a larger trend. The spectacular, mass-casualty terrorist assaults that Al Qaeda was known for are gradually being replaced with acts of violence conducted by small groups or single individuals that are random, small-scale and simple for anybody with a devious religious interpretation to act on.

The problem is that even violence regarded as amateurish or simplistic can cause extensive damage to the governments and societies that terrorists hope to disrupt. The Nice truck attack, for instance, helped convince the French government to maintain a state of emergency that was declared nearly a year earlier after the November 2015 shootings and bombings in Paris. In the United States, the media covers the deadly event in an endless loop for days at a time, generating the very attention that the Islamic State hopes to attract. Indeed, organizations like Al Qaeda and ISIS understand quite deftly that even a single, isolated shooting, bombing, or ramming on a soft target can put an entire continent on edge and spur debate amongst regional governments about whether the system needs to change or whether free movement should be curtailed. If they can produce this kind of damage at a low cost, so much the better for their bottom line.

The inevitable question—one that counterterrorism professionals ask in the immediate moments after a terrorist attack on their soil—is what law enforcement can possibly do to prevent something similar from happening in the future. Some U.S. lawmakers, including Republican Sen. Richard Burr and Democratic Sen. Dianne Feinstein, have proposed bills that would provide police with additional authorities to crack the encrypted devices that terrorists often use to discuss their plans with one another. Others have focused on a more community-based approach, such as providing additional federal grants to local jurisdictions in order to increase collaboration and dialogue between police departments, community leaders, and religious organizations. Some ideas will be adopted, while others will be branded as a waste of taxpayer resources. Still others will be politically unworkable in the correct environment.

But whatever policies Western governments decide to enact, the fact that terrorist groups like ISIS continue to adapt their tactics and procedures means that the men and women of the counterterrorism and intelligence communities will continue to be as busy as they’ve ever been. Hijacking airplanes and flying them into buildings, shocking a superpower and the entire world in the process, is quickly becoming a thing of the past. Territorial safe-havens have ceased to be a prerequisite for a terrorist group bent on striking western soil. If an organization has a decent Wi-Fi connection, access to social media accounts and encrypted apps, and a decent-enough propaganda message, they can inspire or guide enough individuals already residing in the United States and Europe to launch an assault and put an entire city and country in a state of emergency.

We are now all forced to confront a period when simple firearms, knives, and automobiles are the weapons of choice—convenient to access (depending on the country), hard for law enforcement to defend against; and if planned at the right time on a soft-target, resulting in a horrific number of casualties. The planning and execution of the attacks may be dull and juvenile to those planning them, but as the assault in Barcelona this month gruesomely demonstrated, they can paralyze a Western country nonetheless.