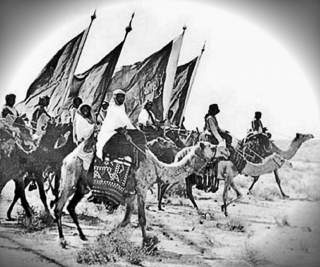 Since the appearance of the self-described Islamic State—formerly the Islamic State in Iraq and the Levant (ISIL)—many analysts tried to trace its political, historical, and ideological genesis. In this article I will draw the attention to some striking parallels between ISIL and the Saudi Ikhwan, another group of terrorists who tormented large populations in the Middle East between 1912–1930, and finally turned against their own patron, Abdulaziz Ibn Saud, the founder of today’s Saudi Arabia, after many years of working together to promote their mutual interests: Ibn Saud’s quest to subdue the Arabian Peninsula and the Ikhwan’s mission to impose their rigid interpretation of Islam on its defenseless communities.

In his quest to restore the lost rule of his ancestors, Ibn Saud (1875-1953) initiated a military campaign that successfully helped him in conquering Riyadh in 1902 and large areas in Najd, the central area of today’s Saudi Arabia. The magnitude of his ambition to conquer vast territories required a strong and extremely loyal army. He then began to recruit the Bedouins of Arabia into a militant religious cult called the Ikhwan and turned their nomadic lifestyle into living in group dwellings called the hujer. The term is derived from the Arabic word for migration (hijrah) and represents a strong invocation of Prophet Mohammad’s migration from Makkah to Madinah. These Bedouins were subjected to rigorous religious education according to the teachings of Muhammad ibn Abd Al-Wahhab, founder of the extremist Wahhabi school of Islamic practice, which is currently the state religion in Saudi Arabia. The Ikhwan became Ibn Saud’s merciless army that went with him on a rampage throughout Arabia to fight the “unbelievers”, meaning all Muslim groups that believed in non-Wahhabi interpretations of Islam.

Like ISIL, the Ikhwan began as a mysterious movement whose genesis remained a puzzle for foreign observers. Not only Ibn Saud’s rivals, like King Hussein of Hijaz, were unsure about the group’s identity, but even the British could not get the exact facts about it despite their close relations with the region and ability to penetrate its communities with their intelligence assets. As the British political officer in Kuwait recalled from his visit to the eastern region of the Arabian Peninsula, all his efforts to find any detailed information about the Ikhwan went in vain as people refused to talk and it was clear that someone with high authority and influence gave them orders to remain silent. He assumed that would be Ibn Saud himself.

It is also important to note the conflicting theories concerning the loyalty of the Ikhwan. As the case with ISIL, the Ikhwan were thought to be loyal to the Turks, while Emir Feisal Ibn al-Hussein (later King Feisal I of Iraq) argued that they were linked to the Bolsheviks. As the declassified archive of British intelligence documents revealed, this latter opinion was shared by some British officials in the region, citing a great disenchantment among the Muslims of Central Asia with the Muslims of the Arabian Peninsula “who sold their souls to the Christians”—that is, the British and their Arab allies in Hijaz. All these are remarkable parallels between ISIL and the Ikhwan.

These suspicions always lacked the supporting evidence and remained weak theories against the strong historical evidence indicating the role of Ibn Saud as the founding patron of the Ikhwan. They were convinced by his allies, the Wahhabi clergymen, that they were in a state of ignorance about the right religion and were reeducated to carry the desired belief system: a combination of Hanbali-Wahhabi literalist interpretation of Islam and a bitter hostility to all the nonbelievers. In their small world, all the “non-believers” were Muslims with beliefs that contravened Wahhabism. In addition to the list of foods, drinks, and practices which are banned by Islam, the Ikhwan, like ISIL, banned smoking and actively went after astrologists and all practitioners of witchcraft and destroyed all the buildings associated with the graves of religious personalities and those of historical significance. And like ISIL, the Ikhwan completely neglected their hygiene, left their hair extremely long and filthy, went on for weeks without washing their bodies, and wore their clothes for a very long time without washing them. Although water was precious in their desert dwellings, this conduct was extreme nevertheless. The teachings of Prophet Mohammad, who also lived in the Arabian Peninsula, mandated an excellent level of personal hygiene for the Muslim.

Another striking similarity between ISIL and the Ikhwan is their extreme fanaticism. The Ikhwan took particular interest in targeting their own blood relatives, whom they deemed unbelievers, before targeting strangers. The recent flare of ISIL members and sympathizers killing their brothers, parents, and cousins is a perfect duplicate of what the Ikhwan did to their own kin. And both groups were taught that the blood, the property and the women of the “unbelievers” are theirs to take and possess, so they went with great enthusiasm to kill the “enemies of Allah” and enrich themselves in the process.

When they took control of a community, both groups acted alike in the enforcement of their laws. The rules were applied to all people in the most severe ways. No exceptions were made and no mitigating circumstances would make the punishment less severe for the violators. Even ignorance of the Islamic law was not considered an excuse for violating it. This was one of the main reasons the Ikhwan turned against their patron, Ibn Saud, when he began to govern with what they considered a pragmatic style that used leniency once in a while, and when he prevented them from attacking other communities, not to mention his improved relations with the “Christian Westerners” in the region. Feisal al-Duwaish, a prominent leader of the Ikhwan, wrote to Ibn Saud: “You prevent me from raiding the Bedouins, and we have become not Muslims fighting the unbelievers and not mere Arabs raiding each other to survive. You deprived us from this world and the hereafter.”

The fact that they turned against Ibn Saud does not negate his culpability as the man who whisked them out of their areligious nomadic life, radicalized them with the most venomous Islamist ideology, drilled in their heads an assortment of communities as enemies of Islam, and unleashed their rage and enthusiasm for bloodshed and plunder for many years, using their wins to build his monarchy. Like their ancestor, the current Saudi Monarchy found in the cruel terrorists of ISIL very useful tools to weaken their enemies (former Iraqi prime minister Nouri Al-Maliki and Syrian president Bashar Al-Assad). The utility of ISIL in breaking these two enemies and facilitating their replacement with pro-Saudi regimes, and in denying Iran its current geopolitical advantage, was in the Saudi mind an accomplishment well worthy of the risk caused by possible domestic ripple effects of ISIL. And just like the Ikhwan, ISIL members are monsters whose rehabilitation and reintegration in a civilized society is impossible. Their patrons, who founded them to serve a timely, well-defined objective, knew full well that they must be destroyed at the end or they would destroy everyone standing in their way.

The argument that Saudi Arabia fights terrorism and it is a target of terrorism does not negate this narrative, but dovetails nicely with it. While the Saudi Kingdom does fight terrorism on its soil, its foreign-policy behavior moves in the opposite direction. From Iraq to Syria, Yemen and South Asia, the Saudis provided terrorists with money, media support, political backing, and lethal religious ideology, which has been hiding in plain sight for decades, in the mosques and schools of Saudi Arabia, not to mention the great supply of radicalized Saudi youth who joined an assortment of terrorist organizations worldwide. It might be true that ISIL funding has shifted greatly from outside donations after it controlled large territories in Iraq and Syria, but the arguments of “self-financing” ignore the funding that allowed ISIL to be strong enough for conquering these territories. It has been reported that ISIL “received up to $40 million in 2013-2014 from businessmen, wealthy families and other donors in Saudi Arabia, Qatar, Kuwait and the United Arab Emirates.” Furthermore, in light of declining oil prices that choked many legitimate oil-based economies, credible energy experts convincingly argue that for “the supposedly oil-rich caliphate, oil was not and is still not critical.” This brings us back to the old money trail.

Now, one century down the line, the resurrection of the Saudi Ikhwan in the form of ISIL is by no means alien to Saudi policies of temporarily favoring a combination of Wahhabi religious ideology and the militant propensities of dispossessed Muslims as proxies against their regional rivals. The inconvenient historical lesson is that Ibn Saud’s destruction of his monster, the Ikhwan, with the blessing of the same religious scholars who radicalized them kept the ideology intact and ready for another round of terror whenever its creation becomes necessary, whether it is to face Soviet Communism in Afghanistan or Iran and the Shia in the Middle East. The current Saudi monarchy’s campaign to condemn ISIL with the help of the same religious scholars whose theology and fatwas serve as the main basis of ISIL’s playbook might help destroy ISIL, but the life cycle of terrorism will remain unbroken.