Israel’s New Election: No One Else but Bibi 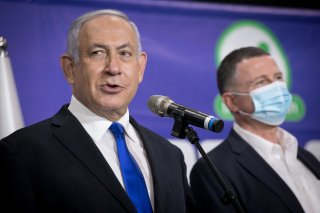 The oft-cited philosophical principle of “Occam’s razor” translates to the notion that the simplest explanation for a causal phenomenon is, more often than not, the correct one. In the context of electoral politics, a natural corollary of “Occam’s razor” is the adage, “if it ain’t broke, don’t fix it.”

Applying this principle to Israel’s March 2021 national election, the Jewish state’s fourth in just two years, the best option for American conservatives, Zionists, and friends of Israel becomes clear: Prime Minister Benjamin Netanyahu should remain in his power, and his Likud must be again tasked with forming a stable governing coalition. From an American conservative, nationalist, and Zionist perspective, there is—for better or worse—no viable alternative.

The March elections will be held in the not-too-distant wake of President Joe Biden’s succession of former President Donald Trump, a true friend of Israel (and the Jewish people), and possibly the country’s best ally in the history of modern Zionism. Together, Trump and Netanyahu worked hand in hand to forge a new Middle East consensus that rejected the sclerotic pieties of the past and advanced an assertively pro-America, pro-Israel vision for the region.

It would be cumbersome to list all of the Trump-Netanyahu doctrine’s myriad advancements on behalf of the Jewish state, but, among other accomplishments, the forty-fifth president: meaningfully undercut Iran’s harrowing path to nuclear weaponry, delivered a decisive blow to the Middle East’s ever-festering Sunni jihadism, defiantly stood up for Israel at the infamously anti-Semitic United Nations, and took numerous concrete steps to bolster Israel’s territorial integrity and physical durability—the moving of the U.S. embassy from Tel Aviv to Jerusalem, the formal recognition of Israeli sovereignty over the Golan Heights, and the State Department’s dramatic proclamation that “settlements” in Judea and Samaria are not per se illegal, among other moves.

But the biggest changes of all under the Trump-Netanyahu doctrine were those pertaining to the so-called “peace process” with the recalcitrant Palestinian-Arabs, as well as those touching upon the so-called “Arab-Israeli conflict” more broadly. By affirming the international legality of Jewish life past the 1948 armistice line, shutting down the Palestine Liberation Organization’s Washington, D.C. mission, signing into law the Taylor Force Act, and introducing the most pro-Israel plan for Israeli-Palestinian peace ever suggested by an American president, Trump—and the Trump-Netanyahu doctrine, more broadly—firmly communicated to the Palestinians that their obstinacy, intransigence, jihad glorification, and intergenerational inculcation of anti-Semitism would finally come at a price.

It was the Trump-Netanyahu doctrine’s fortification of Israel’s strategic, legal, and physical position, combined with the overhanging Iranian threat, that found its ultimate manifestation in the landmark Abraham Accords rapprochement—the most important paradigm shift and debunking of the failed “land for peace” diplomatic consensus in modern Middle East history. The Trump-Netanyahu legacy is thus a doctrine showcasing the virtues of the foreign policy axiom of “peace through strength”—and a vindication of the tangible strategic and geopolitical benefits, for each of America, Israel, and the Middle East, of an emboldened Zionism and a tight-knit U.S.-Israel alliance.

That legacy is also a resounding defeat for those, like former Secretary of State (and current U.S. Special Presidential Envoy for Climate) John Kerry, who have so long peddled the banality that broader Arab-Israeli reconciliation is impossible without mass Israeli territorial concessions to the Palestinian Authority. The outmoded “inside-out” diplomatic approach in the Middle East was indeed dealt a grievous blow by Trump and Netanyahu, but Secretary of State Antony Blinken recently endorsed the hackneyed “two-state solution” framework nonetheless. It remains to be seen how much, if at all, the new administration may be able to simultaneously advance the Abraham Accords’ “outside-in” approach while simultaneously pushing such discredited “inside-out” diplomatic claptrap. What is certain is that all early indications, such as the administration's intensive courting of the terrorist Iranian regime, its reopening of the United States’ Palestinian-specific consulate in Jerusalem, and its restoring of U.S. aid to the anti-Semitic UN Relief and Works Agency augur poorly and suggest a noxious reprise of the Obama era.

For American friends of Israel buoyed by both the intrinsic moral dignity of an enhanced Israeli alliance and that alliance’s concrete national security benefits in repelling both Iranian hegemony and Sunni jihad, the thought experiment as to who ought to next lead Israel amounts to the following: “Which candidate for prime minister would be best in sustaining Israel’s marked geopolitical and diplomatic progress, centered around but hardly limited to the Trump-Netanyahu doctrine of Middle East peace, amidst the headwinds of what promises to be an anti-Israel administration redolent of the Barack Obama presidency?”

The question practically answers itself. Of course, Netanyahu is best-suited to continue leading Israel at the present moment.

Netanyahu’s now-decade-plus second stint as prime minister largely overlapped with the most anti-Israel U.S. administration in the Jewish state’s history, that of former President Barrack Obama. Netanyahu proved himself admirably adroit and courageous during those tumultuous years, developing a knack for when to strategically appease Obama (for example, the ten-month “settlement” freeze of 2010), mustering the fortitude to loudly confront him when need be (for example, Netanyahu’s spellbinding March 2015 speech before Congress, in opposition to the Iran nuclear deal), and prudently hedging his nation’s decades-long wager on the U.S.-Israel alliance by advancing the Jewish state’s diplomatic interests across Asia, Africa, and Central and South America to hitherto unforeseen heights. Netanyahu, in short, has already weathered the storm of an anti-Israel Democratic presidency without suffering serious blows to Israel’s geopolitical clout, and there is no reason to think he cannot ably do so again.

But the greatest diplomatic breakthrough for Israel over the last four decades, and quite possibly over the course of its national history, was undoubtedly the signing of the Abraham Accords with the United Arab Emirates, Bahrain, Sudan, and Morocco. Those peace agreements would not have been possible without the vision and leadership of Prime Minister Netanyahu, whose skill in selling Israel’s value as a diplomatic, geopolitical, and military ally on the world stage helped land the Jewish state not merely closer defense ties with New Delhi or a new Guatemalan embassy in Jerusalem, but affirmative normalization agreements (and all the beautiful accouterments such agreements necessarily entail) with the very heart of the Arab world itself.

Netanyahu has established himself as a transformative leader. He has overseen both unprecedented diplomatic success overseas and tremendous economic growth and technological innovation at home. In the annals of Israeli political history, he is surpassed by no one other than perhaps preeminent founding father David Ben-Gurion himself. That is not to say Netanyahu is flawless; on the contrary, despite his resoluteness on the Iranian threat, he has too often lacked the courage of his convictions as it pertains to Palestinian-related issues, such as sovereignty in Judea and Samaria and the perennial thorn in the side of the modern Jewish state that is the Hamas-run Gaza Strip. There have been missed opportunities, from a conservative Zionist perspective.

But there is simply no feasible alternative at the present moment. Some conservative Zionists and longtime supporters of Netanyahu’s, frustrated with the inherent political instability that comes with four national elections in just two years and the reality of Netanyahu’s legal travails at the behest of an opportunistic legal fraternity, have urged Netanyahu that now is the right time to finally step aside. But even ignoring the largely frivolous nature of Netanyahu’s specific legal troubles, to say nothing of the fact that it is puerile to necessarily expect awe-inspiring personal virtue from our political leaders, such speculation falls flat when one considers a blunt but crucial reality: There is simply no one else who can take Netanyahu’s place.

Yair Lapid would be far too accommodationist toward the Biden presidency, and it is not at all obvious in any event that he possesses anything near Netanyahu’s gravitas and statesmanship. Benny Gantz, Netanyahu’s most recent putative rival, is now a near non-factor, hovering around the electoral viability threshold in polling. Naftali Bennett, the one-time hardliner on Judea and Samaria and Palestinian statehood, has seemingly sold out in courting leftist voters. Avigdor Lieberman is far too factional and pugnacious. Gideon Sa’ar, the Likud expatriate and founder of New Hope, beclowned himself by bringing onboard Lincoln Project hooligans before having to sever ties due to the Lincoln Project’s sordid scandal involving the discredited operative John Weaver, thus undermining any claim he might otherwise have to prudence and sound political judgment. The blunt reality is that, for better or for worse, the “NeverNetanyahu” Israeli Right is best understood right now as a distraction. We true Eretz Yisrael-believing American Zionists might hope for someone even more aggressive or assertive than Netanyahu, but in this Israeli election, there is no mathematical possibility for an alternative, non-Likud-led right-religious coalition that also excludes the dangerous Lapid. The choice between Netanyahu and Lapid appears to be binary—and stark.

Two and a half decades after the travesty of the Oslo Accords, the Israeli Left is probably on its last legs as a political force. Good riddance. But as frustrating as it may be for those on the Right who seek change for the mere sake of change, or for those who think a shift in leadership at the top will finally bring an end to Israel’s multiyear cycle of electoral drama, the fact remains that there is only one logical path forward: that which, yet again, runs through Netanyahu and Likud. Their success is certainly the outcome that American conservatives and Zionists ought to be hoping for.