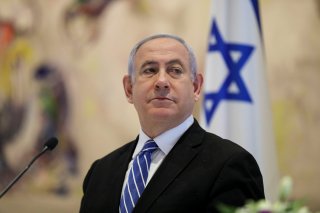 The Saudi television series “Exit 7”—a comedic special aired for the Islamic holy month of Ramadan—depicts a father figure discovering that his son has befriended an Israeli through an online game. The revelation, which recently aired on the Saudi-government owned MBC channel, divides the family. It shocks the father and infuriates his daughter while leading his father-in-law to declare, “So what?”

“Israel is there whether you like it or not,” says the untroubled elder, played by famed Saudi actor Rashid Al Shamrani. He concludes that he would be happy to do business with Israelis and argues in a thinly veiled jab at the Palestinians that they are the real enemy for “insulting” Saudi Arabia “day and night.”

The series have spurred speculation of a prelude to a real-life push for an official recognition of the country long-viewed as the public enemy of the Arab world. It comes at a time when several Gulf states have broken with past and made quiet and clandestine overtures to Jerusalem on matters ranging from security and intelligence sharing to technological cooperation.

According to media reports, three Gulf states have reached out to Israel in recent months to receive information and assistance in the fight against the coronavirus. The winds of change were already publicly manifested in 2018 when Crown Prince Mohammed bin Salman stated in an interview with Atlantic Magazine that Israelis have the right to their own land while emphasizing that the Kingdom of Saud shares interests with the Jewish State. Foreign Minister Israel Katz similarly announced last year that the Trump administration and Israel have been in discussions about a “non-aggression” initiative with unnamed Gulf states.

While several of the five members of the Gulf Cooperation Council (GCC)—Bahrain, Kuwait, Oman, Qatar and the United Arab Emirates (UAE)—wish to cultivate greater behind-the-scenes economic and security ties with the Jewish State, their societies do not. What is the current status and future prospect of this relationship?

From an Israeli perspective, the Sunni Arab Gulf States enjoy significant financial resources and geographical proximity to its archenemy, the Shiite Iran, which the country views as the key threat to its existence. A strategic alliance with the Gulf monarchies would constitute a major step towards Jerusalem’s transformation from a regional middle power into a leading regional power. Simultaneously, the Palestinians would lose their major remaining regional power resource: their ability to obstruct normalization with Israel while Jerusalem would be given an excuse to not act on the Palestinian issue.

Similarly, the Gulf States have felt under threat ever since the 2015 Joint Comprehensive Plan of Action (JCPOA) between the so-called P5+1 (China, France, Russia, the United Kingdom, the United States and Germany) and Iran. The loss of the Sunni opposition in the Syrian Civil War, an unwinnable conflict in Yemen and an increasingly assertive and regionally influential Iran, combined with the Trump administration’s lower profile in the Middle East, has left many traditional U.S. regional allies nervous.

While it remains to be seen if Crown Prince Mohammed bin Salman is a true reformer, he is determined to halt the expansion of Iranian influence, manifesting itself as a “Shiite crescent” from Lebanon to Saudi Arabia, that Jordan’s King Abdullah II forewarned over a decade ago. The semi-normalization of ties with Israel—which holds the military power and political will to limit Iran’s influence—has become acceptable in view of these geopolitical realities.

Jerusalem’s perceived role as a gatekeeper to improved ties with the Trump administration—whose “deal of the century” for Middle East peace includes the vision of broader Israeli-Arab rapprochement—further help explain these shifting attitudes.

However, with an Arab general public still overwhelmingly supportive of the Palestinian cause and critical of Israel’s policies—and Prime Minister Benjamin Netanyahu’s West Bank annexation plans looming—the Gulf states are fearful of a major popular backlash, despite growing evidence of a decreased willingness to place the Palestinian cause above domestic Arab interests.

It remains questionable if these states are willing to take further risks by becoming more open over the extent of the unofficial ties already established with Israel for which, as far as they concerned, they have yet to receive an appropriate return. From Riyadh to Manama and Abu Dhabi, the dividends they are currently enjoying from a quiet cooperation with Israel may be sufficient.

Given these developments, it is likely that Israel will continue to serve as the diplomatic mistress of Persian Gulf monarchs. While the Gulf states are happy to flirt with Israel in private—far away from the public limelight—no one wants to be formally involved. Without progress on the Palestinian track, this relationship will most likely continue to be kept under the covers.

Dr. Daniel Schatz is a political scientist, Visiting Scholar at New York University, International Security Program Fellow at New America and an award-winning writer on international affairs. He has served as a Visiting Fellow at Harvard, Columbia and Stanford University.