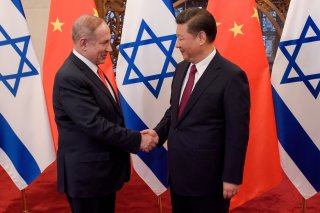 Foreign officials who visit Israel often visit Yad Vashem, Israel’s Holocaust memorial and museum. While Zionism predates the Holocaust, the slaughter of Europe’s Jews casts a shadow over modern Israel. Israelis justified their military investment in the concept that Jews would “Never Again” allow themselves to be at the mercy of genocidal enemies.

However, rather than stand on the side of those surviving from genocide, suffering from it, or at imminent risk, a generation of Israeli leaders has allowed cynical realpolitik and commercial greed to position Israel against its natural, moral allies, and become the go-to partner for the perpetrators of genocide rather than those resisting it.

Perhaps Israel’s most problematic partnership is with the People’s Republic of China. Israel’s military trade is just the tip of the iceberg; far more significant is the Israeli tech sector trade with China. Chinese government entities have invested heavily in companies that specialize in sensitive technologies, attracted not only by Israeli savvy but also an easier investment climate with fewer barriers than China would face in other Western states, especially on cyber activities. Between 2014 and 2016, Chinese venture capital invested in Israel’s high-tech sector doubled to $1 billion, while Chinese investment in Israeli tech start-ups was $325 million in the first nine months of 2018, up 37 percent from a year earlier. While the Israeli government might plead ignorance and disassociate itself from what its private sector might do, this is disingenuous given how other countries do regulate dual-use technologies and address the problem posed by cyber technologies that existing regulations on dual-use military technologies often do not cover. Perhaps a decade ago Israeli leaders could pretend they were unaware of the genocide that Chinese communist authorities perpetrate against the Uighur Muslims. Today, this amounts to the most organized and systematic campaign of ethnic cleansing since the Holocaust itself. While Israel has condemned China’s treatment of its Uighur minority, the Israeli Foreign Ministry did so only after the United States and Canada pressured it to do so. Symbolism, however, is not substance. Israelis should be aghast that China might use its cyber and surveillance technology in its murderous campaign.

Israel’s assistance to Azerbaijan has been more deliberate. A year ago, Azerbaijan launched a surprise attack on the mountainous territory of Nagorno-Karabakh, a largely Armenian-populated region that Josef Stalin had transferred to Azerbaijani control when he gerrymandered the borders of the Soviet Union’s constituent republics. While the United States—and much of the international community—recognized the region as legally Azerbaijani, U.S. law is not so cut-and-dry. As Ara Papian, an Armenian scholar and ambassador noted, Washington need not accept Stalin’s borders as the United States never recognized the Soviet annexation of Armenia. Because Azerbaijan declared itself the successor to the first Azerbaijan Republic rather than the Azerbaijan Soviet Socialist Republic, it too has arguably forfeited its claims to Nagorno-Karabakh. Regardless, Azerbaijan had alongside Armenia committed to resolving its dispute diplomatically and the Deputy Secretary of State Stephen Biegun certified they were sincere. The decisive element that enabled the Azerbaijani victory was Israeli drones that enabled Azeri ground forces to overcome some of their topographical disadvantages. While Baku can tell Western think-tankers and other beneficiaries of its caviar diplomacy that it simply rights a historic wrong left unresolved after the 1988-94 Nagorno-Karabakh War, context matters: The surprise attack came on the one-hundredth anniversary of the Ottoman invasion of independent Armenia. Jihadism and eliminationist rhetoric accompanied the assault, both from Turkish president Recep Tayyip Erdoğan and from Azerbaijani president Ilham Aliyev.

As a long-term strategy, Israel’s blind support of Azerbaijan is counterproductive. Whereas its weapons-for-oil trade was once a necessity, it no longer is. The precedents Israel creates in Nagorno-Karabakh will undermine its own demands for defensible borders. Nor is Azerbaijan anymore the anti-Iranian, anti-extremist bastion it once was. That Aliyev has subordinated his sovereignty to Turkey and Russia only hastens its transformation.

This is not to give Armenia a free pass. Armenia’s ties to both Iran and Russia are undeniable. But those ties are also a result of Turkey and Azerbaijan’s continuing blockade. That Armenia has turned away from dictatorship while Azerbaijan embraces it is reason enough to reconsider existing policy. Rather than help Azerbaijan continue its ethnic cleansing and genocide against Armenians, Israel might instead urge Baku to trade with them. At the very least, Israel should take no part in the slaughter of Christians given that the Turkish leadership and regional jihadists hold Jews in equal contempt.

Israel deserves opprobrium for enabling the slaughter of Armenians, but its defense industry now appears to be repeating such actions in Ethiopia. It has now been almost a year since Ethiopian prime minister Abiy Ahmed launched an assault on Ethiopia’s northern Tigray province. Rather than the quick war that Abiy promised, the Tigray Defense Forces successfully countered the Ethiopian assault. In response. Abiy has sought a genocidal campaign of detention and mass starvation. Still, the Tigrayans refuse to give in.

Enter Israel and Turkey. It appears Israel has already provided drones to Ethiopia, and Turkey may do so soon. Indeed, as analyst Rashid Abdi notes, Ethiopia is unique in the Horn of Africa (if not in the world) for receiving drones from Iran, Israel, and Turkey. Israel also sells Ethiopia the Thunder infantry mobility vehicle. Whereas in the late twentieth century, Israel’s diplomatic isolation meant that it could not be selective in its relations with countries willing to engage, the end of the Cold War shattered that isolation. There is simply no strategic reason why Israel should engage militarily with Ethiopia knowing that an increasingly erratic Abiy will use those arms against Ethiopia’s Tigrayan minority. Nor is it wise realpolitik: Abiy will not last forever, and Tigrayans—and others victimized by Abiy—will have long memories.

Israel’s track record in Burma against the backdrop of the massacre of Rohingya is equally disturbing.

The Prophet Isaiah spoke about the Israelites as a “light unto the nations.” Certainly, generations of Israelis sought to live up to this notion, notwithstanding the exaggerated polemics that today surround Israel’s territorial disputes with the Palestinians. Israelis are rightly proud of the agricultural, scientific, and technological know-how they have given to Africa, South Asia, and Latin America. Together, this has saved millions of lives. For Israeli politicians, diplomats, and business leaders knowingly to assist regimes engaged in genocide risks all the good their predecessors have achieved. It is shortsighted. It is morally repugnant. And Israel will ultimately pay a huge long-term price for its immoral cynicism.