Israel Has it Right: A Whole-of-Nation Approach Is Required to Fight the Coronavirus 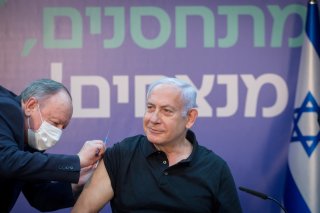 Had the United States been attacked last year with a bio-weapon, such as weaponized Anthrax or Pneumonic Plague there is little doubt but that a unified national response would have been mounted, led by the full force of the federal government including the formidable logistical capabilities and resources of the military to support the civilian population. The coronavirus has already caused a greater combined loss of life than all of America’s wars since Korea, and the disease has inflicted trillions of dollars of loss and debt on the U.S. economy.

The United States should take a page from the Israeli playbook and confront this terrible disease with the same level of determination and resources as if a foreign country had launched a bio-attack on our country. In just the first three weeks, Israel managed to vaccinate 14 percent of its population. Over that same time, the United States inoculated less than 1 percent. So far, Israel beats every country in the world hands down, giving shots to 150,000 persons a day in a country of nine million. Having been forced to prepare for countless existential threats since 1948, Israel’s national security apparatus is attuned to handling a diverse array of potential threats, including pandemics. Its approach to fight the coronavirus has lessons for the United States.

To combat a virulent disease that respects no borders, there must be a unified, national effort with no Balkanized competition for scarce resources such as face masks, ventilators, vaccination equipment or anything else needed to eradicate the disease. In developing a vaccine, the federal government and private sector marshaled their collective scientific talents and financial resources to develop at “warp speed” a medical miracle—proving the exceptional benefits of public-private partnership.

But, the responsibility to administer those shots to America’s population fell to state governments. In a true national emergency, as opposed to more regional catastrophes such as hurricanes or floods, the federal government is in the best position to support local priorities of all the states by allocating or sharing scarce resources while guaranteeing that a comprehensive approach meets the best interests and priorities of the country. As well as vaccine development, Washington should have been more involved in the rollout of inoculations from the very beginning to make sure that all Americans received their shots as rapidly as possible. It is hard to imagine the chaos that would result if—in response to an enemy Anthrax attack—the job of actually giving shots to 330 million Americans was left to the varying efforts of fifty states as has happened with the vaccine program. The Biden administration will now play catch-up ball, getting the federal government more involved with the rollout of the coronavirus vaccine, but the experience carries broader policy lessons.

America’s emergency response system needs to reorganize so it can better deal not only with pandemics but with any kind of future national emergencies whether a public health crisis, a cyber-attack or any other catastrophic event that grips the entire country. A Commission, composed of major business leaders and current and former senior officials of the U.S. government, organized by the nonprofit organization Business Executives for National Security, studied the coronavirus crisis and has formulated a range of recommendations to help improve America’s overall national emergency response approach to any kind of crisis. Those findings will be released shortly, including proposals for integrated federal/state/local/civil and business reorganization.

Creating a state of the art, virtual network across these stakeholders can provide crisis managers and responders with superior tools for better results. This includes establishing a common operating picture across the nation, accurate and timely information on critical resources and supplies, and a mechanism to share and multiplex people, assets and resources across our fifty States.

Like Israel, the United States must become better prepared to deal with existential challenges that can go far beyond the military sphere or a pandemic like the coronavirus. The successful solution must enable all sectors—state, private, nonprofit and federal—to perform at their best with Washington playing the role of an orchestra conductor, making sure that all stakeholders play from the same sheet of music.