Israel Must Accept that the U.S. Will No Longer Police the Middle East 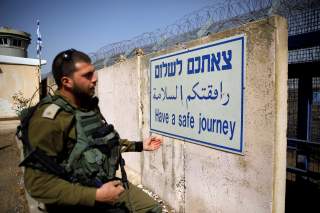 It is possible to understand the almost hysterical reactions among members of the Israeli political establishment and its media outlets to President Donald Trump’s decision to evacuate 2,000 American soldiers from Syria.

The Americans have betrayed the Kurds! This was a win for Iran and a victory for Russia! It would lead to the disintegration of Syria and to chaos in the Middle East! Israel would now be left alone without American protection! And, hey, we told you long ago that deep in his heart the Donald is an anti-Semite!

After all, the political decisions in the capital of the American Empire could affect the status of Israel and the other Middle Eastern provinces. Even the French are concerned, not to mention the strategic geniuses at the Pentagon, the State Department, and the other centers of power of American foreign and defense policy — including retired Secretary of Defense James Mattis.

These best and brightest were the ones who pushed the United States, with the support of neoconservative commentators and liberal internationalists in opinion pages of the mainstream media and think tanks in Washington, into the military marshes between the Euphrates and the Tigris and the Hindu-Kush mountains.

After fifteen years — the longest war in American history — American soldiers are still stuck in Afghanistan, and now the failed architects of the wars in the Greater Middle East and the plans to do regime change, nation build and establish democracy in Iraq and Libya are trying to drag the United States into a new military adventure in Syria. And God forbid, that idiot occupying the White House refuses to buy the goods. What a Chutzpah!

The American political elite will always refuse to say “no” to wars. Columnist Andrew Sullivan wrote in New York magazine, describing the sense of the Apocalypse Now that has taken control of Washington after the Americans decided to bid farewell to the Kurds, Druze, Shiites Sunnis and the other exotic tribes and gangs in the Levant. Bye, bye, and have a nice day!

After the United States invested $6 trillion in wars in the Middle East, shattered the balance of power in the region, bolstered Iran’s position and encouraged radicalism in the Arab world — without even getting a T-shirt in return — President Trump, like his predecessor in office Barack Obama, rejected the advice of the Washington “blob” to produce a sequel to the Iraq movie in Syria, which could have led to military conflicts with the Russians and the Iranians.

The bottom line is that, like most Americans living outside of Washington bubble, Trump and Obama understood that the Cold War ended long ago and that Russia was not “like” the Soviet Union; that the United States, not Saudi Arabia, was the largest oil producer in the world; and that the outcomes of intertribal and inter-sectarian struggles in the Muslim world will have a marginal impact on U.S. national security interests.

Why do Americans need to care about who wins the Sunni-Shiite struggle, or why should Washington invest its resources in trying to oust Bashar Assad or to seek a solution acceptable to Benjamin Netanyahu, Mahmoud Abbas and Hamas — when at the top of the American Agenda is need to curb China’s military and economic power which evolved at the time when America was stuck in the Middle East.

The problem is that the worldview of those who manage and interpret Israeli foreign policy in recent decades has developed at a time when it was common to think that Americans have no choice but to “do something” when “something” happens in the Middle East.

After all, if the American president did not abandon all his internal and external problems and concentrate on solving the last crisis in the region, a nuclear war will erupt between Washington and Moscow. The Saudis will impose an oil embargo. And the Jewish state will cease to exist.

That was then. The message now being conveyed by Trump is that if the Israelis, the Saudis and the Turks — two regional military powers and one of the richest economies in the world — worry so much about what is happening in Syria, well, they should take care of it instead of phoning the White House.

And perhaps the time has come for the Europeans, whose Middle East is their strategic backyard, to finance Syria’s economic rehabilitation or to increase their military budgets in response to the Iranian nuclear threat.

And would it be so terrible if, instead of the Americans, it would be the Russians who would sink into the Syrian swamp while trying to balance the interests of the Israelis, the Iranians and Assad?

As for the possibility of a war between Turkey and Syria, it is not nice to say, but the long war between Iran and Iraq ended up helping to advance the interests of Israel and the United States.

Israeli decision-makers must leave their own bubble and face the anticipated changes in the status of the United States in the Middle East, and understand that Trump’s policy, like that of all his predecessors, is not “pro-Israel” or “anti-Israel,” but mainly pro-American.

The British Labor government was waging a campaign against the establishment of the State of Israel after World War II not because British Foreign Secretary Ernest Bevin was an anti-Semite, but because it advanced policies aimed at preserving British interests in the Middle East and containing Soviet expansionism.

In the 1950s, the status of the China Lobby, which defended Formosa’s interests (today Taiwan) against Communist China, was at the peak of its power, and one of its leading spokesmen was Congressman Richard Nixon of California. In the 1960s, the United States changed direction in favor of Beijing, abandoning Taiwan, and guess who was driving that policy? President Richard Nixon.

Interests change, relations change and what happens in East Asia could happen in the Middle East in the future. Israel should prepare for the day after when Washington’s ability to promote Israeli interests would be limited, even if the president sitting in the Oval Office has Einstein’s IQ.

Just as the Israeli left and its supporters in Washington must not live in the illusion that today’s America will “save Israel from itself” and impose a political settlement on it, the Israeli right and its American friends must recognize that American hegemony in the Middle East has come to an end and that Israel will solve its problems with Syria, Iran, Turkey and Russia—not to mention the Palestinians—on its own.

Under the best-case-scenario, Americans can use their diplomatic power to help reach an agreement with the Palestinians and with their military power to help Israel curb the Iranians. But in the end, Israel, you are on your own!