On Israel-Palestine, Obama's Job Isn't Over 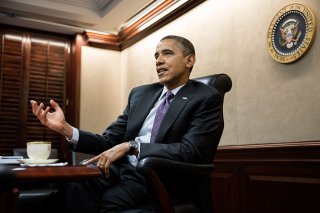 Resolving the Israeli-Palestinian conflict started as a high-priority issue on the Obama administration’s foreign-policy agenda almost eight years ago. A special envoy was appointed, and President Obama made a determined—albeit wrongly formulated—effort to deal with the Israeli settlements, which he perceived as a major obstacle. But now, eight years later, the prospect of moving towards a two-state solution seems as distant as ever. Instead, the Israelis and the Palestinians are sliding consistently toward a one-state reality, which is not a solution, but a recipe for never-ending war between the two peoples, and most probably the path to an apartheid state. We are not yet there, but we are dangerously approaching such a situation—which may be irreversible.

Are the United States and the international community (represented by the Quartet) to be blamed for the current situation? Could the administration invest much more of its time and efforts, and in a better way, to engage the parties in a meaningful negotiation process? Certainly, an historical assessment of the Obama administration’s legacy regarding its management of the Israeli-Palestinian issue has yet to take place. However, the more pressing and concrete matter that faces the administration is whether it should use the time left between the election and the swearing-in of the new administration to lay a better foundation for the future resolution of this conflict based on its lessons during these eight years. Precedent shows that during this period, the president is freer to articulate foreign-policy decisions based on their own merit, and not on domestic policy considerations. One of the best-known precedents of this kind, which was highly relevant to the Middle East, was President Reagan’s decision to start a dialogue with the PLO in 1988.

The current political situation on both sides of the Israeli-Palestinian divide is not amenable to a conclusion of a permanent status agreement through bilateral negotiations. In Israel, the government in power is the most right-wing government Israel has ever had. It is inconceivable that this government would be capable of proposing an agreement the Palestinians can accept, and its dependence on far-right coalition partners and fear of its radicalizing constituency will thwart any attempt to moderate its positions.

It was Secretary of State John Kerry who recently said that Israel and the Palestinians are moving towards the reality of a one-state solution and a war, and that it is incumbent on the international community to contain that trend. It seems that the Obama administration understands that the current first priority is not the resumption of bilateral negotiations, which will be a road to nowhere, but real steps that on one hand will arrest the slide to an irreversible one-state reality and, on the other hand, draw a new road map towards the resolution of this conflict. The first goal implies the administration should use this short period to continue determining serious limitations on building in settlements, to prevent building in areas that should form the territory of the future Palestinian state, and to act to enable more authorities and use by the Palestinian Authority of significant parts of C areas, which are currently under full Israeli control.

The road map should articulate the administration’s view on the path to a settlement, as well as the terms of reference for a settlement—namely, the main principles for a permanent two-state solution, as deduced from the last rounds of negotiations. In this framework, ideas such as an international conference raised in the so-called French initiative, and determination of the terms of reference either by a presidential statement or a UN Security Council resolution, which gives it international legitimacy, should be considered. A new UNSC resolution will replace Resolutions 242 and 338 and will become the new reference point for the international community on this issue.

It could be argued that replacing the aforementioned resolution is long overdue, and that, since President Obama as well as Secretary Kerry have on a number of occasions outlined their views on the parameters for a two-state solution, they should promote a UN Security Council resolution that reflect the United States’ and the international community’s view on the resolution of the conflict.

Clearly, resolutions or statements cannot overcome a lack of will by the parties concerned to move the process forward. Nevertheless, symbolic acts like the those mentioned above, which will be endorsed by the United States and the rest of the UN Security Council’s members, will send a powerful message to the parties regarding the international community’s determination to take steps toward the realization of a two-state solution.

One should not delude oneself in thinking that the two parties will currently accept these ideas. That does not mean that the Israeli government and Palestinian Authority’s reservations against such a move are a reason not to pursue it. Furthermore, a resolution could help the incoming administration when it decides—and it should—to engage the parties in relaunching a useful process. Finally, these steps will prove to be very useful when the political stars on both sides will be arrayed correctly to enable a resolution of the conflict.

Brig. Gen. (ret.) Shlomo Brom is a Senior Fellow at the Institute for National Security Studies in Tel Aviv and a Visiting Fellow at the Center for American Progress. Amb. Shimon Stein is a Senior Research Fellow at INSS and a former deputy director general of Israel's Foreign Ministry, and ambassador to Germany.