Israeli Repression Links the Violence in Gaza and Jerusalem 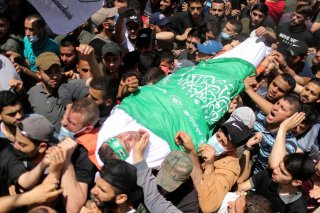 The growing ferocity of Israel’s military offensive on Gaza amid continued rocket attacks by Hamas has largely overtaken the original crisis that triggered it just 50 miles away in Israeli-occupied East Jerusalem. The current crisis began earlier this month with Palestinian demonstrations against the imminent expulsion of some eighteen families in the Sheikh Jarrah neighborhood in order to put Israeli settlers in their place. The expulsions are part of a broader effort by radical settler groups and Israeli authorities targeting the homes of dozens of Palestinian families. Palestinian demonstrators were met with a massive show of force by Israeli authorities who responded with tear gas, stun grenades, sponge-tipped bullets, and beatings, leading to hundreds of injuries. As the protests spread to other parts of the city so did the violent Israeli crackdown, including nightly raids by Israeli forces at the Al-Aqsa Mosque compound, even as thousands of right-wing Jewish marchers descended on the Old City in commemoration of Jerusalem Day.

The scale and brutality of the crackdown, along with the assault on Islam’s third holiest site during the Muslim holy month of Ramadan, virtually guaranteed an escalation. And sure enough, seeing an opportunity to assert itself as defenders of Al-Aqsa, Hamas launched a barrage of rockets on Israel, which in turn triggered massive air and artillery assault on Gaza by Israel. The latest Israel-Hamas conflagration, which shows no sign of letting up, has so far resulted in the deaths of 122 Palestinians and six Israelis, most of them civilians, with hundreds more wounded.

If all of this feels familiar, it’s because it is. The current dynamics are eerily similar to 2014 when a series of violent provocations in the West Bank and East Jerusalem led to eight weeks of largescale death and destruction, most of it in Gaza. While there is no shortage of violent flashpoints in Israel/Palestine, including most recently mob violence between Arabs and Jews inside Israel itself, for the past several years Gaza and East Jerusalem have been the two most prominent venues of recurring violence and unrest, sometimes together and sometimes separately but always simmering just beneath the surface.

But why does it keep happening? On the surface, the conditions in Gaza, with its impoverished and densely packed population of two million and which has been governed by the Islamist militant group Hamas since 2007, and Israeli-occupied East Jerusalem, home to 350,000 Palestinians and which has been formally annexed by Israel, seem vastly different. In reality, Gaza and East Jerusalem have one critical feature in common as the two areas where Israeli control over Palestinian lives and livelihoods is most pronounced and most oppressive, albeit for vastly different reasons—Gaza because Israel hopes to be rid of it once and for all and East Jerusalem because Israel seeks to consolidate permanent control over it. The crushing weight of the seemingly endless blockade on Gaza and the relentless drive to Judaize and de-Palestinianize East Jerusalem have made both areas prime flashpoints for chronic turmoil and bloodshed.

Ironically, Gaza and East Jerusalem are also the two areas that Israel insists, quite implausibly, are not under occupation. Despite withdrawing its soldiers and settlers from Gaza in 2005, the international legal consensus is that Israel—which continues to control Gaza’s air, land and sea borders, and even civilian matters like taxation and the population registry—remains the occupying power there. Likewise, Israel’s annexation of East Jerusalem is not recognized by the bulk of the international community.

Israeli policies in East Jerusalem are driven by two parallel goals: to maximize the Jewish presence and character of the city while minimizing the Palestinian ones. Denied services from Israel and cut off from the Palestinian Authority, East Jerusalem and its roughly 350,000 Palestinians live in a kind of social and political limbo. In addition to being physically isolated from the West Bank and internally fragmented by Israeli settlements and the separation wall, the city’s Palestinian population is subjected to a wide array of officially sanctioned (and well documented) discriminatory policies in nearly all facets of life, including taxation, housing, building permits, education, water, health services, and residency rights. Despite making up around 38 percent of the city’s population, Palestinians in Jerusalem receive just 12 percent of the municipal budget. Since 1967, more than 14,000 Palestinian Jerusalemites have had their residency rights revoked by Israel, with over half of these revocations occurring since 2006. Meanwhile, around 80 percent of Jerusalem’s Palestinians live below the poverty line. The marginalization and denationalization of Palestinian Jerusalemites by Israel has only intensified in recent years, including the systematic eradication of Palestinian national, civic, and even cultural institutions. The pending expulsions in Sheikh Jarrah and other East Jerusalem neighborhoods have heightened the Palestinians’ sense of existential threat.

Gaza’s isolation is even more pronounced. Since 2007, Israel’s air, land, and sea blockade has devastated Gaza’s economy and practically wiped out Gaza’s private sector and middle class. Unemployment stands at an astronomical 46 percent, while the poverty rate stands at 39 percent. More than 70 percent of Gaza’s population receives some form of international aid, the bulk of which is food assistance. Three major wars (before the current one) in the span of twelve years have led to thousands of deaths, tens of thousands injured, and the destruction of homes and shattered civilian infrastructure. Some 97 percent of Gaza’s water is unfit for human consumption. According to the United Nations, shortages in clean water and fuel, on top of inadequate health and education services, have essentially made the strip uninhabitable. And that was even before the Covid-19 pandemic strained Gaza’s fragile health care system to its limits. The implications of having an isolated, impoverished, and increasingly hopeless population for the region’s stability and security are not difficult to imagine.

The fact that Gaza’s blockade has been periodically eased as a direct result of violence has, perversely, only fueled the endless cycle of war. Worse still, after fourteen years and four major wars, nobody really knows what it will take to lift the blockade. Israeli leaders have long since abandoned the goal of overthrowing Hamas for fear that what would come after would likely be even worse. But they have never articulated what, if anything, could be done to end the siege. The Gaza blockade has in effect become permanent, part of the new normal like Israel’s seemingly endless occupation itself. It is this specter of permanent Israeli control over 5 million stateless and disenfranchised Palestinians that has led Israeli and international human rights groups to conclude that Israel is guilty of apartheid. Even as it pays lip service to a two-state solution, the international community—particularly the United States—has largely acquiesced to the Israeli-imposed status quo in Gaza and East Jerusalem by exempting both areas from the political and diplomatic process. The violence we see today is very much a product of this neglect.

And what of the Biden administration’s response? Much like its overall stance toward Israel/Palestine, the administration has so far adopted a minimalist approach to the current crisis. Both President Joe Biden and Secretary of State Antony Blinken have forcefully condemned Hamas rockets but have said little about the Israeli military offensive in Gaza, despite the mounting civilian death toll and growing scenes of destruction there. Although the administration called for de-escalation and dispatched a mid-level envoy to the region, U.S. officials have avoided serious steps to end the hostilities. This is especially problematic given the enormous asymmetry that exists between Israel—as the region’s most formidable military known for its reliance on disproportionate force—and a paramilitary group like Hamas—which employs crude weapons that, while still capable of inflicting terror and occasionally death, pale in comparison to Israeli firepower.

While the issue was clearly not an administration priority to begin with, U.S. inaction is both untenable and self-defeating. For one, the very notion that the United States could adopt a “hands-off” approach when it comes to the Israeli-Palestinian conflict is in and of itself nonsensical. Thanks to Washington’s $3.8 billion annual investment in Israel’s military and its willingness to provide cover in the United Nations and other international forums, the United States is more or less always actively involved. Biden has said his “hope is that we’ll see this coming to a conclusion sooner than later.” But hoping for the best is neither a plan nor a policy. The longer the Gaza crisis drags on, the more difficult it will be to bring it to a close and the more bogged down in it the United States ultimately will become.

Indeed, many see President Biden’s laissez-faire attitude toward the violence as an effective green light for Israel to continue and even escalate its military offensive—a sentiment reinforced by the administration’s repeated and unqualified declarations that “Israel has a right to defend itself.” Perhaps not coincidentally, within hours of Biden’s statement that he saw no “significant overreaction” by Israel in Gaza, Israel’s military intensified its bombing campaign of the Gaza Strip. All of this suggests the United States is part of the enabling environment that helps to perpetuate the conflict. The only question is whether it can also be part of the mitigating environment.