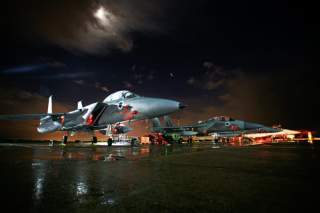 Israel is faced with two opportunities that could help ensure its security for generations. While each offers great challenges, the failure to achieve them both will haunt Israel.

First, Israel has the chance to remove Hamas’ terrorist government from power; it must take this opportunity. Hamas has never been weaker. Arab nations are distracted by their own unrest following the “Arab Spring” and have turned away from supporting Hamas. New governments are attempting to manage the ongoing threats to their control or power. These factors make Arab states less sympathetic to Hamas or interested in Israel.

Some Arab nations and groups would actually like to see Hamas removed from power. While the Palestinian Authority has publicly stated it wants a cease-fire, they would likely be happy to regain control of Gaza from Hamas. Saudi Arabian media has offered stinging criticism of Hamas, saying Hamas’ actions in escalating the conflict have been “unreasonable and irresponsible.” The Saudi media has argued that Hamas has been willing to sacrifice the lives of Gaza’s citizens by “exposing them to inevitable attacks.”

Egypt has gone from being an ally of Hamas, to an enemy. Hamas is an offshoot of the Muslim Brotherhood, which briefly held power in Egypt from 2012 to 2013 under President Mohamed Morsi, before Morsi and the Muslim Brotherhood were overthrown by the military. The new president, Abdel Fattah al-Sisi, and his government view Hamas as hostile and dangerous, in part due to Hamas’ support of the Muslim Brotherhood government, but also because it destabilizes the region. Hamas has been involved in numerous terrorist attacks against Egyptian civilians and soldiers over the past year. These actions have led Egypt’s government to destroy dozens of smuggling tunnels between Gaza and Egypt and to designate Hamas as a terrorist organization. Many members of the elite in Egypt have been privately saying that they hope that Israel destroys Hamas. As Israel’s current ground operation in Gaza began, these comments became less private. Increasingly, there are public voices in Egypt, from the government to the elites to the media, who are strongly criticizing Hamas and voicing support for Israel’s operation. It appears that Sisi and many other Arab leaders are hoping, sometimes in private and sometimes in public, that Israel will remove Hamas from power once and for all.

Most of the world currently appears to understand that Israel must eliminate the threat from Hamas. The lack of support for Hamas from Arab nations is so notable that Hamas has criticized Arab nations for failing to come to their aid. Arab nations may have come to realize that groups like Hamas sow instability and sectarian divisions in the Arab world. For example, the Islamic State of Iraq and al-Sham (ISIS), which now controls wide sections of both Syria and Iraq, is an Islamic extremist group that has spread sectarian violence and crossed national boundaries. Their interests and goals are not unlike those of Hamas. The terrorist organization Hezbollah, which has ravaged Lebanon, has been a rare supporter of Hamas in the current conflict, yet has offered no concrete support. Arabs are growing weary of such conflict and the intimidation and violence such groups use to spread their message.

The United Nations, which frequently condemns Israeli military actions, has been less critical of Israel’s current campaign, and has only recently begun to make a concerted effort to achieve a cease-fire. UN Secretary General Ban-ki Moon has called for restraint and offered some criticism of Israeli actions, but this has been far less than in previous campaigns. In fact, in this conflict, Hamas has faced severe criticism from the UN after Hamas rockets were discovered in two UN school buildings. The EU, which is usually highly critical of Israel’s actions, has issued a statement strongly critical of Hamas that recognized Israel’s “right to defend itself.” Leaders in Australia, Canada, France, Germany and Italy have all issued statements condemning Hamas and in support of Israel’s right to self-defense. Hamas’ tactics of targeting civilians are repugnant to the majority of the world. Further, during the current conflict, Hamas has repeatedly violated cease-fires, including during Operation Protective Edge.

Israel, however, cannot count on such international opinion being long-lasting; it must act now. The tide may already be beginning to turn against support for Israel’s actions, making the need to act with speed even greater. The United States and UN, along with Egypt and the Arab League, have begun a push to implement a cease-fire. Israel should make clear that it cannot accept a cease-fire that leaves Hamas in power. Hamas has repeatedly demonstrated that it does not respect cease-fires, and each past cease-fire, in this conflict and in conflicts past, has been followed by another round of attacks. Israel should not have to face inevitable continued rocket fire, as will happen if Hamas maintains power. It will not take long for Hamas to renew its attacks; it always returns to its established ways.

Additionally, Israel cannot afford to back down now that it has begun the ground operation. Israel must ensure that the terror tunnels are destroyed and that Hamas’ rocket arsenal is eliminated. Such victories would only be temporary, however, as Hamas will simply rebuild its rocket supply and dig new tunnels. It has been suggested that in a cease-fire arrangement, international monitors would be brought in to ensure disarmament occurs, but it strains credulity to believe that Hamas would be unable to rearm even with monitors present. The UN and even the United States have failed in such missions in the past, especially in the Middle East.

The downfall of Hamas provides an additional benefit to both Israel and the citizens of Gaza. It would allow Israel to end the blockade on Gaza, which has been causing hardship for residents of Gaza and image problems for Israel. Many nations, and not just nations within the Arab world, have condemned Israel’s blockade. The blockade is viewed by some international actors as ethically unacceptable collective punishment and as responsible for the suffering of Gaza’s citizens. While there is debate over the degree of distress in Gaza and whether Israel’s blockade or Hamas’ corruption is more to blame, there is no doubt that there is real hardship, especially for those who are not rich or in power and that the blockade plays a role in this. There is also no doubt that whatever the multiple reasons for the suffering, Israel is being blamed. Lifting the blockade would be a humanitarian advance and would likely provide a boost to Israel’s image in the international community.

Going further along these lines, Israel should help rebuild Gaza. This is not a task Israel needs to, or should, take on by itself. Responsibility for governing and rebuilding Gaza should be transferred to the Palestinian Authority and President Mahmoud Abbas, so that Gaza can be fully integrated into a potential future Palestinian state. Israel should assist Abbas in improving the lives of the citizens of Gaza by helping to provide building supplies and funds. The downfall of Hamas would also offer Israel a chance to strengthen relations with Egypt. A stable Gaza is in the interest of both countries. Additionally, Israel must tell the world it is time to put its money where its stated concerns have been. If the world wants to help Gaza, the removal of Hamas from power, followed by joint Israeli, Palestinian, Egyptian and international investment and cooperation, present the perfect opportunity. Israel should ask the world to assist in helping the Palestinians. This is not just humane, but would likely, and justifiably, bolster Israel’s image.

The second opportunity, following the defeat of Hamas, is to make a lasting peace with the Palestinians. The time may be right. The majority of citizens in Gaza want the violence to end, and people in Gaza now appear to prefer the Palestinian Authority to Hamas. Abbas has shown a willingness to speak against decades of hate and reach out to Israel. He has become one of the first Palestinian leaders to recognize the Holocaust, saying it was the most heinous crime in modern human history, and calling it the embodiment of racism. He has additionally implied he is willing to accept a two-state solution and he has said the Arab decision not to accept the 1947 UN accord was a mistake that he wishes to rectify. Of great importance, he issued a strong and unequivocal condemnation of the kidnappings and murders of Naftali Fraenkel, Gilad Shaer, and Eyal Yifrah, calling the three teenagers “human beings just like us.” Abbas demanded their safe return and offered Israel the assistance of the Palestinian Authority security service in finding them. Abbas has been critical of Israel during Operation Protective Edge, but he has also condemned Hamas for its actions.

Abbas may not be going as far as Israel would like, and there are certainly reasons to question his sincerity, but ignoring what he is saying would be a missed opportunity, and true negotiation demands compromise. Abbas is growing older and his legacy is at stake. He might want that legacy to be as a man who brought peace to his people and the Middle East. Israel should not miss this chance. Israel must have the courage and resolution to act before Palestinian and Israeli attitudes harden further against peace or events make agreements impossible.