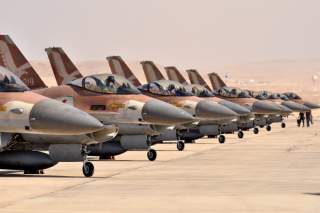 If you were asked to summarize the feelings within the White House and the U.S. State Department this week, they lie somewhere between ecstatic and relieved. Ecstatic, because President Barack Obama has succeeded for the time being (assuming that Congress doesn’t override a presidential veto) in preventing Iran from obtaining a nuclear-weapons capability over the next ten to fifteen years. The administration is relieved because, despite all of the saber rattling over a U.S. military strike on Iran’s nuclear facilities, Washington was able to remove the nuclear file from the table through diplomacy. “This deal demonstrates that American diplomacy can bring about real and meaningful change,” President Obama remarked in the East Room of the White House, “change that makes our country, and the world, safer and more secure.”

There is one person, however, that firmly and sincerely believes that the agreement that was signed by all of the parties is a bad one. And he represents the state of Israel, America’s closest ally in the Middle East: Prime Minister Benjamin Netanyahu.

Netanyahu’s opposition to the Joint Comprehensive Plan of Action—indeed, one could say the very notion of negotiating with the Iranians directly—is not exactly a surprise. In fact, lobbying against the deal has been (and will remain) a top priority in Netanyahu’s mind for as long as he has occupied the prime minister’s chair. He’s been vocal every step of the way, from the November 2013 interim arrangement that he called “a historic mistake” to his interview with NPR last week, where he described the final product as a deal that paves “Iran's path to a nuclear arsenal.”

Although there may finally be a comprehensive, verifiable agreement that the United States and its negotiating partners are comfortable with, Prime Minister Netanyahu continues to keep all his options open. President Obama has consistently said that “all options remain on the table” to prevent Tehran from obtaining a nuclear weapon—diplomatic-speak for the use of military force. Yet Netanyahu has been far more blunt and straightforward, going so far as to order Israeli military planners in 2010 to begin preparing for a unilateral air campaign against Iran’s nuclear-enrichment facilities. It’s conceivable, if not entirely possible given Netanyahu’s strong disagreement with the Obama administration on how to manage the Iranian nuclear portfolio, that Netanyahu will give a similar order in the future.

What would a unilateral Israeli strike on Iran’s nuclear facilities look like? This question has been pondered by numerous analysts ever since Iran’s first enrichment facility was outed in 2002, and the consequences of such an attack have been explored in depth from Washington to London to Moscow. But, notwithstanding the JCPOA, an operation from the air is still very much a high-risk but potentially high-reward last option for the Israelis.

1. Pick up the intel and share it with Washington ASAP

It would be enormously complicated from a diplomatic standpoint (although still very much possible) for Prime Minister Netanyahu (or any future prime minister of Israel) to authorize an aerial campaign against Tehran’s nuclear facilities if he lacked the hard and convincing evidence needed to substantiate his concerns. Based in part on Netanyahu’s poor assessment of the consequences of any interim nuclear deal with the Iranian regime, Washington will be loath to support a claim about Iranian cheating without information that can be corroborated by the U.S. intelligence community. One of the reasons why the George W. Bush administration tacitly approved of a 2007 unilateral Israeli strike on Syria’s nuclear reactor at the al-Kibar facility was because Israeli officials shared information with the White House in a relatively short period of time.

As in previous encounters, any information picked up by the Mossad would be validated, discussed among a small circle of Israeli national-security and intelligence officials and packaged neatly for the Americans so the U.S. government would have visible and straightforward information to look at. The Israeli ministers of defense and foreign affairs and senior figures from the Israel Defense Forces would be involved in selling this information to their U.S. colleagues in the Pentagon, the State Department and the intelligence community. The aim would be not to convince the Americans to join in the operation (although this would certainly be helpful from a logistical and kinetic standpoint), but to ensure that the United States would not openly disagree or oppose an operation, if Israel chose to act.

2. Set up the logistics

A successful Israeli strike on Iran’s nuclear facilities at Qom, Fordow, Natanz and Parchin will only be as successful as the logistics and overflight rights established prior to the first scramblings of F-15s and F-16s. Before the Israelis can do anything in the air, officials in the Ministry of Defense will set up a secret channel with counterparts in the region in an attempt to establish the easiest possible route into Iranian airspace. This inevitably means talking in some way to the Saudis, the Jordanians, the Turks or the Azeris to probe whether they would be interested in granting overflight rights or effectively looking the other way. The Israelis may even ask whether it’s possible to station Israeli aircraft on Azeri or Turkish soil in order to cut the amount of time and fuel the jets would have to spend before hitting their targets.

This will be an especially tough job for the Israeli government to accomplish. While the Saudis and the Israelis have a mutual enmity towards Iran, this doesn’t necessarily mean that Arab states in the region would cooperate with Israel to bomb another Muslim country. Reports have surfaced as early as 2010 that suggest Riyadh would turn off its anti-aircraft radar so Israeli planes could traverse Saudi airspace without the risk of being shot down, but those reports are consistently denied by senior Arab officials as soon as they become public.

3. Push Congress for weapons systems to do the job

Prime Minister Netanyahu’s controversial speech in front of Congress aside, Israel still has plenty of stalwart allies in both the House and Senate. Israel’s special relationship with Congress is still good on a bad day, and its lobbying impact on the legislative branch is successful, regardless of which party holds the majority or which lawmaker happens to be the Speaker of the House.

Israel will no doubt exploit these long-standing and deep connections to ask Congress to appropriate money in a supplemental bill or during annual budget negotiations for delivery of the hardware ultimately required to destroy all of Iran’s enrichment facilities. This means the sale of the 30,000-pound bunker-buster bomb known as the Massive Ordnance Penetrator—the only munitions in the U.S. arsenal that can credibly reach the underground enrichment facility at Fordow. Israel has been trying to get the United States to transfer these munitions for years, and they have been rejected each time for fear that Tel Aviv would take action on its own. Washington’s calculations could dramatically change, however, if Israel provides the White House with irrefutable evidence of covert Iranian nuclear-weapons work.

Twice in its history, Israel has taken unilateral action to dismantle an Arab country’s nuclear program: Iraq in 1981 and Syria in 2007. Both missions were low-key and highly compartmentalized, meaning that word of the operation didn’t leak out beforehand and the Iraqi and Syrian governments woke up the next day shocked that their programs were destroyed. Iran’s nuclear program is different: it’s widespread across the country, either next to or on military bases, and surrounded with anti-aircraft batteries and air-defense systems. A quick, one-two punch similar to the 2007 operation in Syria would not work in Iran.

If four F-15s and four F-16s were used for the overnight bombing of Syria’s al-Kibar facility, at least two dozen aircraft are likely required in any Israeli strike of Tehran’s nuclear program. (this is probably a conservative estimate based on my amateur military analysis). Multiple days of airstrikes would likely be required given the size of Iran’s facilities and its air-defense system, which means that Iranians would be afforded more time to contemplate how they would respond. Fordow, Natanz, Isfahan and Parchin would be the primary targets for the raid; Arak could be bombed as well if the Iranians had yet to disable that facility’s reactor as required under the JCPOA. The use of mid-air refueling aircraft would be critical (particularly if Israel is unable to persuade a regional power to host a forward-deployed Israeli Air Force contingent) in keeping Israel’s jets in the air for a longer period time—thereby increasing the chance that more damage can be done.

5. Hit Iranian proxies in the Gaza Strip in a preemptive operation

One of the principal arguments for restraining Israel over the past six years has been the very plausible case that Iranian proxies in the region—especially Hezbollah in southern Lebanon and Hamas/Palestinian Islamic Jihad in Gaza—would retaliate by lobbing thousands of missiles into Israel. While one can argue that whether both organizations would risk significant degradation in their military power for the sake of Iran is debatable, it’s a scenario that Israeli planners will need to consider. And for a risk-averse Israeli military establishment that often expresses more dire threat assessments, the threat of possible retaliation from these two terrorist organizations opens the possibility of Israel taking even more military action in other theaters of the Middle East.