On the Issue of Chinese Malign Influence, Both Trump and Biden are Right 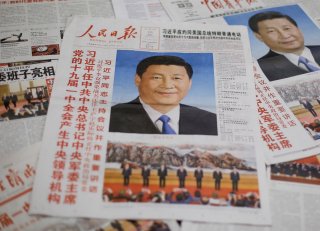 With even fewer weeks until the first ballots are cast in the 2020 election, both President Trump and presumptive Democratic presidential nominee Vice President Joe Biden have finally agreed on something—China’s blatant, malign attempts to interfere in America’s democracy can no longer go unpunished. While it will take time to fully neutralize this threat, the good news is that Democrats and Republicans at the federal and state level are well-positioned to enact common sense measures to disrupt Beijing’s activities.

The White House’s “Strategic Approach to the People’s Republic of China” represents a bold take on Beijing’s long-standing influence operations in the United States, including the shadowy web of Chinese media entities operating on U.S. soil. In recognizing that China, like Russia, seeks to intervene in U.S. domestic affairs, the White House’s position is closely aligned with not only Congress, but also the Biden campaign, which released a statement about preventing foreign interference in our election. As they say, democracy makes strange bedfellows.

Paired with other congressional investigations, the White House report paints a picture of how Beijing sets its sights on businesses, universities, think tanks, scholars, journalists, and government officials in an attempt to put its stamp on public discourse abroad while also dampening any external influence on China’s domestic affairs. To that end, the Chinese government has weaponized a range of traditional media platforms, like television, radio, and print, in addition to social media. While some of these efforts are unambiguously linked to the Chinese government, others are purposely structured to hide Beijing’s hand. One such example, according to the White House, is China Radio International, which was “revealed to control 33 radio stations in 14 countries via shell entities.”

The Chinese influence machine does not just target America’s media landscape. Arguably, its most successful efforts to shape the narrative around China involve co-opting prominent academics and influential members of the business community to advance the Party’s objectives, often in exchange for financial remuneration or promises of market access. This tactic, known as “elite capture,” is also a hallmark of Beijing’s One Belt One Road initiative.

In the United States, Chinese companies also routinely take advantage of lobbying loopholes by hiring former senior U.S. government officials to represent their interests in Washington. For example, Max Baucus, the former senator and U.S. Ambassador to China, has a consulting group whose clients include Chinese firms seeking access to the U.S. market. Similarly, Huawei hired Andy Purdy, a former White House staff member, as its chief security officer. Unfortunately, these cases represent just the tip of the iceberg, as Chinese companies have successfully employed similar tactics in other democratic countries, like Australia and New Zealand.

Within the United States, even state legislatures have become targets of Chinese influence. Chinese diplomats regularly seek to insert pro-Beijing language into motions under consideration by state houses, although this has at times provoked a backlash, as it did in Wisconsin in April. China’s activities on U.S. college campuses have been more sweeping, including direct support to more than 100 cultural centers, known as Confucius Institutes, and China’s Thousand Talents program, which is tasked with stealing sensitive R&D. By leveraging its presence on campus, Beijing has also undermined protests calling out its human rights violations, which have taken on renewed significance following reports about the forced sterilization of Uighur Muslims in Xinjiang Province. Under pressure from the Defense Department and other agencies, dozens of Confucius Institutes have closed, yet Chinese efforts to suppress free speech on American campuses persist.

Enhancing collaboration and information sharing between Washington and state governments is key to blunting China’s malign influence campaign. Federal mechanisms like the Foreign Agents Registration Act (FARA) provide a useful framework for state governments to mirror as they seek to track Chinese agents and their enablers. In addition, increasing federal-state intelligence sharing and defensive counterintelligence briefings about Chinese activity is another potential tool. Finally, ensuring that federal and state-level entities working on monitoring Chinese activities are properly resourced is a must. The administration should also consider applying to Chinese diplomats the same strict restrictions Beijing places on the movement of U.S. diplomats in China.

The White House could also amplify the language in Executive Order 13770, and Congress may want to revisit 18 U.S.C. § 207—both of which govern the ability of former senior U.S. government officials to work for foreign state-owned enterprises or other companies deemed a national security risk. The administration and Congress should also revisit gaps in existing campaign finance reform laws, as Chinese nationals and their surrogates have been keen to take advantage of these loopholes as well.

Lastly, the administration and Congress should consider bolstering public-private partnerships, especially with social media companies, to better understand China’s overt and covert attempts to influence U.S. public opinion in cyberspace and college campuses. The administration’s Economic Prosperity Network represents a useful model for such an undertaking.

Recent bipartisan efforts to counter Chinese influence operations with the United States are commendable, but they are also just a start to what will almost certainly be a protracted fight to defend American interests. For now, with sixty-eight days to go before November 3rd, the pressure is on to stand up to Beijing’s rampant abuses, regardless of who wins.

Craig Singleton, a former U.S. diplomat and national security expert, is an adjunct fellow at the Foundation for Defense of Democracies (FDD), where he also contributes to FDD’s Center on Military and Political Power (CMPP). FDD is a Washington, DC-based, nonpartisan research institute focusing on national security and foreign policy.