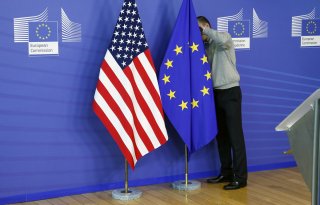 It is in this enlightened legalism that Kimmage wants the West re-anchored, which implies plucking the ethno-cultural undertones that history has appended to it. He is all too aware of the dilemma this seemingly poses between discarding these unsavory connotations and upholding the cultural soil of republican virtue that is a precondition for successful self-government, but he boldly refuses to play by it. It is by mere historical contingency, he rightly stresses, that Western moral codes, enlightened reason, and the primacy of the written word have been associated with Caucasian ethnicity, for they know no ethno-cultural context other than themselves. Those who were blessed first with their discovery have the duty to guide others towards them, which is a vastly different notion of Western responsibility than neocon-inspired regime change—the hubristic delusion that deems democracy easily exportable to the furthest reaches of the globe. Having led to Vietnam and Iraq, this “messianism” was, in Kimmage’s reading, built on a disregard for democracy’s preconditions that is strikingly similar to the cultural relativism that the hangover from these foreign policy blunders have later inspired. The two lead to vastly different worldviews, but both are founded on de-anchoring liberty and self-government from their cultural prerequisites—a healthy individualism, communitarian traditions, and enlightened civility.

KIMMAGE’S ROADMAP to saving the West thus stresses that the self-evident truth of human equality knows no national boundaries, and that America’s unique mix of self-government built on republican virtue is peaceably accessible to all nations, for all are equally called to enjoy the blessings of liberty. It is by nurturing the West’s universalist appeal that Kimmage hopes to close the back door, once and for all, to the unsavory discourses of whiteness and Euro-American supremacy that have long been invoked to justify such anti-Western practices as forced conquest, imperialist colonization, and slavery. Reviving this version of the West echoes again the mission to uphold America at home—the two require a similar argumentative method that foregrounds their defense in the language of natural rights and the promise of equality in freedom. They will also require facing up to past and present violations of these ideals, while highlighting them as the only domain where freewheeling individuals can aim for better—in other words, argue from the West but not with the West. Kimmage dreams of a Western pantheon that honors Frederick Douglass, W.E.B. Du Bois, and Martin Luther King on an equal footing with the Founding Fathers.

This kind of intellectual rearmament may find ferment in challenges foreign as well as domestic: shortly after the U.S. flag burned in Athens and CHOP, the streets of Hong Kong were awash with it in a Western cry for freedom and against Beijing’s tyranny. Kimmage’s fellow academic-cum-diplomats at the State Department’s Policy Planning Staff are taking notice—a year ago, Mike Pompeo gathered a star line-up of intellectuals to “advise on human rights grounded in our nation’s founding principles and those of the 1948 Universal Declaration of Human Rights,” forming the Commission on Unalienable Rights now led by Peter Berkowitz, Kimmage's Republican successor. Even then, it is at home that a West rehabilitated must ultimately take root, through the same conduit that ennobled it a century ago—the university. On this score, the prospects are as bleak as ever, for the anti-Western revisionism that Kimmage describes as having taken hold seems loath to compromise on a de-ethnicized reset. Perhaps Kimmage underestimates his opponents’ determination by hoping that the West can be restored to its erstwhile luster if only a certain ethno-cultural reek was cleansed from it. Perhaps the wokeness that has conquered the academy has irretrievably diluted both liberty and its cultural preconditions in an all-absorbing magma of cultural relativism. Perhaps Oswald Spengler, Pat Buchanan, and James Burnham—three authors Kimmage cites for having raised alarm about the West’s demise—were simply canaries in the coalmine. Perhaps the intellectual cul-de-sac they warned would come from relativizing the West has become our present predicament.

Perhaps Hong Kong shows the way. Or perhaps that way has been shut off for good.

Jorge González-Gallarza Hernández is a senior researcher at Fundación Civismo.