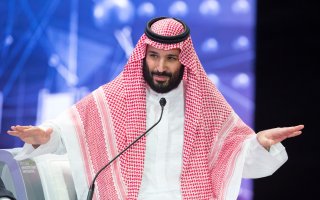 For eight decades, the United States has enjoyed close, albeit complicated, relations with the Kingdom of Saudi Arabia (KSA). But for the past four years, the Washington Post has held a grudge against Saudi Arabia. The Post’s grudge is perfectly understandable—KSA agents killed one of its columnists, Jamal Khashoggi, in 2018—and, in fact, the newspaper, in its single-mindedness, has had considerable impact on American policy. However, our ship of state ought not to be steered by journalists. The national interest requires a larger perspective, including due regard for traditional tools of statecraft, including arms sales and the transfer of martial know-how.

So now we come to the Post’s latest salvo against the KSA, fired on October 18, headlined, “Foreign Servants: Retired U.S. Generals, Admirals, Take Top Jobs With Saudi Crown Prince.” The graphics-heavy piece was a major enterprise, running more than 7,000 words. Two reporters share the byline, and thirteen more Posties are credited for their research, editing, and production. We can rest assured that the Pulitzer Prize committee has been duly notified.

As the article detailed, some 500 retired American military personnel have taken jobs with foreign governments, advising on security matters. Then the Post zeroed in on its real target, the KSA: “In Saudi Arabia, for example, 15 retired U.S. generals and admirals have worked as paid consultants for the Defense Ministry since 2016.” This information was mostly ferreted out by Freedom of Information Act requests; it seems that retired military are duty-bound to get approval from the Department of Defense. That’s a reasonable requirement that one retired general, former Trump national security advisor Michael Flynn, ignored when he did work for Russia. This seeming violation was recorded by the Post, and yet it chose to focus on senior retired brass and the KSA, most notably, Gen. James Jones, once President Barack Obama’s national security advisor. All this was troubling to the Post because of the KSA’s “brutal crackdown on dissent,” including, of course, the murder of its man Khashoggi.

The death of Khashoggi was an outrage, and it seems to be traceable to KSA’s de facto ruler, Mohammed bin Salman (MBS). Yet in the rankings of deadly international incidents—with the World War I-starting assassination of the Austrian archduke Franz Ferdinand as a perfect, cataclysmic ten—the death of Khashoggi doesn’t rate high.

The raison d’etat reality is that the United States needs the KSA and MBS, warts, bloodstains, and all. Why? For the same reason that President Franklin D. Roosevelt trucked with the country’s founding warrior king, Ibn Saud, back in 1945: oil. Today, the KSA has the world’s second-largest oil reserves, and the second-highest production. And while oil isn’t as important as it once was, it’s a lot more important than fashionable greens thought it was. As the Germans and other Europeans will be discovering this chilly winter, in the wake of the cutoff in Russian hydrocarbons. So that’s why President Joe Biden has been trying to, uh, warm up to KSA.

Yet for a while, Biden was a loyal proponent of the Post’s foreign policy; in 2019, he declared KSA to be a “pariah.” Such words from Candidate Biden might have made one think that President Biden would want nothing to do with the KSA. And that thought was no doubt pleasing to not only the Post but also to the greens, who regard all oil producers, countries, or corporations, as pariahs. But since then, Biden was elected, and now he’s looking at future elections—2022 and 2024—and so things look different. Today, the applause of the Post means less than the assessment of the voters. As one mainstream media headline asked this month, “Will gas prices decide the midterms?” If they do, Biden and his fellow Democrats have a problem, since the price at the pump is up nearly a dollar-and-a-half since the forty-sixth president took office.

Seeking relief from high prices, Biden traveled to the KSA in July, to, if not kiss the ring, then at least bump the fist. The prospect of that trip pained the Post editorial page, which labeled it “deeply disappointing.” Indeed, the edit page, long a hotbed of neoconservative moral clarity, lamented, “Realpolitik has triumphed over moral considerations.”

Yet interestingly, for all its situationist cynicism, Biden’s trip was mission: unaccomplished. Perhaps all those snubs and insults aimed at the KSA were not so easily fisted away; MBS proved unmoved by Biden’s entreaties. Three months later, assessing the longer-term effect on energy prices, CNN called the presidential pilgrimage a “failed effort.” The report added that the White House, thinking ahead to the November elections as energy-fueled inflation rages, was “having a spasm and panicking.”

Yet beyond the surface foam of electoral politics, we might consider the deeper currents of geopolitics. As Biden said in his ill-starred visit to the once-pariah-ed kingdom, the United States “will not walk away from the region and leave a vacuum that will be filled by China, Russia, or Iran.” That’s a sensible take; too bad it wasn’t Biden’s all along.

So now let’s return to those retired officers, and what they’ve actually been doing. As the Post story on October 18 put it, “Most of the retired U.S. personnel have worked as civilian contractors for Saudi Arabia, the United Arab Emirates and other Persian Gulf monarchies, playing a critical, though largely invisible, role in upgrading their militaries.” Hmmm. In other words, even in retirement, they’ve been helping to advance U.S. interests, preventing the encroachment of rivals and enemies. And for once, we’re not paying for this defense; the countries themselves are footing the bill—sweet!

The Post added, “Saudi Arabia buys more U.S. weapons than any other country in the world by far.” Even sweeter. And the Post further added, “More than 200 active-duty American troops are stationed in Saudi Arabia as trainers and advisers.” In other words, Gen. Jones and his colleagues might well be working with the active-dutiers whom they once commanded. So private gain aligns with public policy. Talk about your harmonic convergence.

None of this makes the KSA a nicer place, or MBS a better man. Still, as various American leaders are said to have said about such men, “He may be a son of a bitch, but he’s our son of a bitch.”

Recently here in these pages, I have argued that the Biden administration has done a fine job building support for its defense of Ukraine. In fact, we can see the prospect of even stronger alliances, worldwide, all of which will be needed to fend off Russia, China, and their allies. And in this global matchup, we can use all the help—and the military strength—we can get. So, the work of retired Americans to build up our allies is a feature, not a bug. The Post may well win a journalism prize for its latest report, but the rest of us should be reminded: statecraft is too important to be left to scribblers.