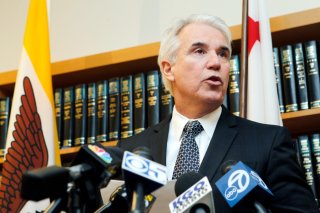 These rogue prosecutors, and those who fund them, dress up their schemes with poll-tested feel-good language like “re-imagining prosecution,” and argue that “data and science” back their pro-criminal, anti-victim approach.

But that’s just nonsense when you see the actual results of their pro-criminal policies—urban disorder, mass shoplifting, open prostitution, and drug markets, and, in many cases, record numbers of shootings and murders.

They all argue that most misdemeanors should not be prosecuted and push for the elimination of cash bail. This has led to a revolving-door criminal justice system where offenders—even violent offenders—are released back to the streets where police officers are discouraged from making arrests.

And what’s the point of arresting someone, if the prosecutors in your city aren’t going to charge the criminals or even seek to detain them without bail? Presto: arrests go down, and rogue prosecutors have “data” to show that their approach “works.”

Yet the results of these prosecutors’ rogue, radical policies have been disastrous.

Last year’s murder total in Philadelphia is more than double the number of people murdered each year in the city only a few years ago, including the years immediately before Krasner came into office. Maybe he’s been too busy making his eight-part, fawning PBS documentary to focus on keeping the City of Brotherly Love safe.

Unfortunately, it’s common for these rogue prosecutors to be more concerned with making national headlines than with doing their jobs.

In St. Louis, Kimberly Gardner has been, according to local news reports, criticized for being “gone from her office a couple of times every month, [and] jetting around on someone else’s dime.” Her travel has been described as “prolific and problematic,” making it “difficult to get decisions made.”

Needless to say, crime in St. Louis is out of control. And Gardner is not doing nearly enough to combat it. In fact, a St. Louis judge last year dismissed murder charges against a defendant and ordered him released because the prosecutor from Gardner’s office went on maternity leave, and neither Gardner nor anyone else from her office bothered to make sure someone else was handling the case. The judge said Gardner’s office had “abandoned its duty” after failing to show up for three court hearings and failing to respond to a court order to produce evidence to the defendant.

In San Francisco, a local judge took the extremely unusual step of expressing his concerns about Chesa Boudin’s management of his office. The judge said, “I cannot express in any more certain terms my disapproval of the manner in which the office of the district attorney is being managed.” He added: “It’s time to really take care of business at home instead of thinking about the national or state stage. Individualized consideration of these cases, individualized justice requires no less.”

As the old saying goes, birds of a feather flock together. These rogue prosecutors frequently wind up on the same boondoggles in far-off lands together, often subsidized by the misnamed “Fair & Just Prosecution” organization, which promotes policies that are neither fair nor just—at least not to victims of crimes.

The Tides Foundation, which is supported by George Soros and other wealthy individuals, and the Open Philanthropy Project, which was founded by Facebook cofounder Dustin Moskovitz and his wife, Cari Tuna, provide funding for this group and others to act as the central clearinghouse for many of the ideas parroted by the rogue prosecutors on the ground.

Essentially, a group of left-leaning billionaires discovered that they could get the most bang for their buck by funding rogue district attorneys who would simply refuse to enforce certain policies or laws they disagreed with rather than undertaking the much more difficult and expensive task of electing sympathetic state legislators to actually change states’ laws.

Efforts by Soros and others to elect rogue prosecutors ramped up during the 2016 election cycle where Soros contributed millions of dollars to political action committees supporting rogue candidates in at least nine states. The donations have continued since then, though the exact amount can be difficult to trace since the money is funneled through a variety of entities.

But what are the goals of these left-leaning billionaires and rogue prosecutors?

The rogue prosecution movement has been honest in academic writings about their goals. One cheerleader for their movement wrote in a law review article that the goal is to “reverse engineer the criminal justice system.”

They believe the entire criminal justice system is racist. It’s absurd, but they believe it.

They are avowedly pro-criminal and decidedly anti-victim. In fact, they believe that criminal defendants—people who commit murder, rape, child abuse, abuse women, and the like—are the real victims.

As a result, once elected, rogue prosecutors don’t seek individualized justice. That’s part of the problem. They forget victims, coddle criminals, and usurp the role of the legislative branch of government by declining to prosecute entire categories of crimes. That is not prosecutorial discretion. That is prosecutorial usurpation and malpractice.

As part of their efforts to dismantle the system, they have made eliminating cash bail a primary goal. Though practice can vary from state to state, prosecutors and judges typically consider two factors when requesting and setting bail or detaining someone pre-trial without bail: First, whether that person is a flight risk, and second, whether that person poses a danger to the community. That’s how it works in the federal system.

If either of these conditions are met, bail can—and should—appropriately be denied.

But not for rogue prosecutors. They have adopted a nobody-gets-held-without-bail approach. In fact, they support releasing most defendants with little to no bail.

Guess what happens when you let a career criminal back on the street after he is suspected of committing a heinous crime?

We’ll give you four choices:

First, he goes to church. Second, he volunteers at the local homeless shelter. Third, he goes back to college to earn his degree. Fourth, he commits more crimes.

Of course, rogue prosecutors know that the fourth option is what often happens, but they don’t care.

In Chicago, police have pointed to the “skyrocketing use of electronic monitoring as a key factor” in the city’s shocking number of murders. To add insult to injury, the Chicago Tribune found that Kim Foxx, Chicago’s rogue DA, doesn’t hold defendants accountable when they violate their bail terms.

According to the Chicago Tribune, “About 400 people are charged every year with felony escape. During [her predecessor’s] last three years in office, she dropped 55 such cases, compared with 420 for Foxx,” meaning that if someone is released on bail with an ankle monitor, he can essentially cut that monitor off with little to no consequences.

Law professor and former federal judge Paul Cassell has convincingly argued that Chicago’s practice of releasing more defendants on pretrial release has significantly harmed community safety. And more to the point, how many lives were needlessly lost because of it?

We know that at least six needless deaths occurred because of the policies of John Chisholm, Milwaukee’s rogue DA. Chisholm allowed Darrell Brooks, despite his lengthy rap sheet, violent history, and an outstanding warrant, to post a measly $1,000 bail after being charged with several felony offenses that reportedly stemmed from him running over a woman with his car. It’s believed the woman was the mother of Brooks’ children. That event eerily foreshadowed his callous actions when he ran his car into a crowd at the Waukesha Christmas parade killing six and injuring at least forty more people.

Chisholm, hopefully horrified at the results of his own policies, now calls Brooks’ bail “inappropriately” low. But we all know why he said that now: he was covering his rear end.

He knew what the likely consequences of his rogue radical policies would be, and he went ahead with them anyway.

Back in 2007, he said, “Is there going to be an individual I divert, or put into [a] treatment program, who’s going to go out and kill somebody? ... You bet. Guaranteed. It’s guaranteed to happen.”

But the king of rogue prosecutors is Los Angeles DA George Gascon. We’ve written an entire research paper on all of his radical and dangerous policy proposals. He takes the cake when it comes to heartless, callous disregard for the consequences of his pro-criminal actions.