It’s Not the Military’s Job to Oppose Trump 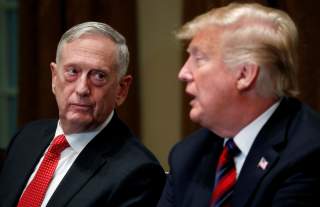 President Donald Trump’s promise to send large numbers of troops to the southern border to stop the so-called migrant caravan making its way north through Mexico has been, to say the least, controversial. Many have called on Secretary of Defense Jim Mattis to put his foot down on the matter. Some, notably Washington Post foreign affairs columnist David Ignatius, have called for Joint Chiefs of Staff Chairman Joe Dunford to do the same. This misapprehends the proper role of the military leadership in our society.

While I share the misgivings about using the military to stop unarmed asylum seekers for a variety of reasons beyond the scope of this essay, it is well within Trump’s remit as commander-in-chief of the armed forces to order their deployment for that purpose. Indeed, as Ignatius acknowledges, many other presidents have done so. There are some legal questions about what active duty troops under Title 10 federal authority (as opposed to National Guard soldiers under Title 32 authority) may be asked to do. But, so far as we know, they have so far been asked to perform only unquestionably lawful support functions.

To the extent that Mattis and Dunford disagree with the policy, they owe it to the nation and their president to give their best advice against it. Despite his impulsiveness, Trump has demonstrated that he is persuadable by Mattis in particular. Presuming they have tried and failed to convince the President to reverse course, however, they have two legitimate choices: carry out the order to the best of their ability or resign their posts in protest and continue their fight from the outside.

While I agree with those who argue the deployment is an unseemly “political stunt,” that would seem an odd hill, indeed, to choose to die on. Unless they believe the order unlawful or one that seriously endangers U.S. national security—and it would be difficult to make either argument based on what we know so far of Trump’s plan—Mattis and Dunford are much more valuable inside the room where they can help steer the policy clear of legal and moral pitfalls.

Dunford, in particular, must appear always above the political fray since he is a uniformed officer. His duty is to render his best military advice to the president, secretary of defense, and National Security Council. But he must do that in private. His public commentary ought to reflect the policy preferences of the elected decisionmakers, not his own preferences nor those of the top brass.

To the extent that the chairman’s personal views on the matter should be made public while he remains in uniform, it’s the job of the Congress to ask him to discuss those views on the record. That both the House of Representatives and the Senate are currently controlled by the president’s party makes it unlikely they’ll do so.

If the public is unsatisfied with this arrangement, they have another opportunity to weigh in on the matter at the ballot box next Tuesday and again two years after that. It is not the job of the military leadership to override the policy preferences of their elected bosses.