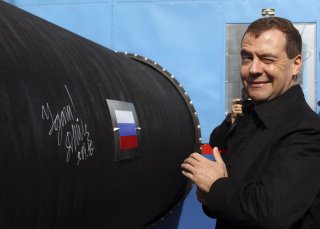 We are approaching the endgame for the Nord Stream II (NS2) natural gas pipeline. Begun in 2018, the pipeline aims to link Ust Luga, Russia, to Greifswald, Germany. Today, it has under one hundred miles remaining to be completed.

Decisions made over the next few weeks will determine whether gas ever flows through NS2. It is time for the United States to finally checkmate the project, which is neither economically necessary nor geopolitically prudent, and which harms transatlantic security.

In an early call with German Chancellor Angela Merkel, President Joe Biden stated his desire to revitalize the transatlantic relationship. Germany is indeed a vitally important U.S. ally in Europe, and Biden’s decision to freeze a plan to withdraw nearly twelve thousand troops from German bases is the correct one.

The Biden administration should not, however, let its desire for public comity with Germany lead it to back off on pressuring European companies taking part in building NS2.

Last week the State Department released a congressionally-mandated report identifying companies that have violated U.S. laws by helping build NS2. But it listed no European companies for new sanctions. It named only Russian companies or those that have already left the project.

The is worrisome. Secretary of State Antony Blinken reportedly “is loathe to target companies or individuals from nations like Germany, arguing that it’s more important to find a diplomatic solution.”

However the administration proceeds on NS2, some European countries will be upset. There is no magical fix that pleases all—only the cold reality of what is in U.S. national interest: ending NS2.

Most of Europe opposes NS2. On Monday, the foreign ministers of Poland and Ukraine penned a joint editorial in Politico calling on Biden to “use all means at his disposal to prevent the project from completion.”

There is also significant opposition within those nations whose governments support NS2, like Austria, Germany, and the Netherlands. While backers promote NS2 as a purely commercial project born of economic necessity, evidence for that view is tenuous at best. For instance, in Germany, analysts have recently stated that the pipeline “isn't essential for maintaining Germany's energy security,” but it “environmentally destructive and commercially inefficient.”

NS2 would benefit Russia by staunching the flow of transit fees currently collected by eastern European nations like Ukraine—money that Kyiv uses to defend itself in the ongoing, Russian-supported war in Ukraine's Donbas. The pipeline would also magnify Russia’s ability to use its European energy dominance as a political trump card.

According to the Congressional Research Service report, Russia accounted for 45% of the EU’s natural gas imports in 2019. If completed, NS2 and the often-overshadowed Turk Stream pipeline, which will bring Russian gas to Turkey via a pipeline under the Black Sea, will further increase Russian gas exports to Europe.

The fact that NS2 continues to attract backing from some nations in Europe, despite an exhaustive and growing list of Russian outrages (many perpetrated on European soil), indicates just how much influence gas deliveries give Putin on the continent.

Some viewed the Trump administration’s fervent opposition to the pipeline and efforts to block its completion as an unnecessary exacerbation of bilateral relations with Germany since, so the thinking went, the pipeline would be completed regardless.

Yet, the U.S. has thus far been remarkably successful in arresting the development of NS2. Eighteen companies have dropped out of NS2 due to U.S. sanctions pressure, and its future remains in limbo.

President Biden has called Nord Stream II a “bad deal for Europe.” He is correct. The United States should not back off its opposition to NS2 now. Strong bipartisan opposition to Nord Stream II led in part to the inclusion of sanctions in the National Defense Authorization Act (NDAA) for Fiscal Year 2020. These sanctions were further expanded in the 2021 NDAA passed in December.

Undeterred, supporters of NS2 are eagerly proposing mechanisms to rein in Russia and assuage the U.S. concerns. For example, German officials are busy crafting supposed buttresses such as “snapbacks” or resolutions to shut off NS2 if Russia engages in further misbehavior. Yet, these mechanisms are bulky, unproven, and, indeed, unlikely to be used once the pipeline is up and running.

At a time when the United States is seeking to respond to Russia’s brazen, expansive, and extraordinarily damaging cyber-attacks against Solar Winds, backing off NS2 would be a puzzling mistake.

In this game of geopolitical chess, there can be only one winning outcome. For the United States, acquiescing to NS2’s completion would be a historic mistake. It is time for a checkmate.

Daniel Kochis is a senior policy analyst specializing in European affairs in The Heritage Foundation’s Margaret Thatcher Center for Freedom.