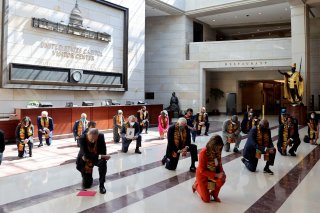 Dominic Raab, the current British foreign secretary, and the man who should have been the British Prime Minister is under incessant assault from liberal sophisticates. In a talk radio interview, Raab theorised that the current obsession with “taking the knee” (a phrase which is both syntactically erroneous and aesthetically jarring), is from the TV series the Game of Thrones, before adding that it is a symbol of “subjugation and subordination”. Pressed further, he added that he would only kneel before his missus and the Monarch, which is just about perfect for a conservative leader, as far as social propriety is concerned. Naturally, he is facing all the expected flak from the expected corners of society, media and academia.

Strangely, as more and more “conservatives” won political power everywhere in the Anglosphere, the more passive they became regarding the use of that political power. Donald Trump is isolated and incoherent, Boris Johnson is invisible and increasingly irrelevant. So much so, that watching the anarchy in Britain and America, one might be under the impression that we are living either in a failed state with no central writ or jurisdiction or worse, surviving amidst conquered people. In that scenario, Raab, however, is the only conservative leader on record in the entire Anglosphere, who not only defiantly refused the offer of an anatomical part but displayed the presence of another rare anatomical part, a spine. In his own way, he is correct about the religious dimension of the current movement.

The current protests are a culmination of a larger socio-political movement that snowballed since 2016. Both in Brexit Britain and Trumpian America, the providential progressive march of internationalist liberalism was abruptly stopped in the same year. As nothing is worse than the shattered faith of fanatics, every single apparatus was mobilised to reverse that and ensure nothing similar happens ever again. The current protests are nothing but a continuation of what can safely be termed a transnational movement; an all-conquering religion determined to crush everything on its path. Portland has some similarities to Palmyra. To use James Lindsay’s terminology, this is a war against “Normal”. An extremely aggressive movement, complete with its own flags, holy months, and concepts of sin, trying to take over the current order, practically facing no opposition from the hapless ruling elite, half of whom are craven, and the other half complicit.

The political divide makes it even clearer. In Britain, the soft liberal-Blairite left led by Labour leader Sir Keir Starmer and his cohorts kneel to appease the mob on the march (overwhelmingly white and always hyper-liberal), to erase Nelson, Napier and Churchill’s existence from British history. These are the same folks who prefer any flag, from the imperial blue EU standard to the quasi-religious rainbow, over the Union flag. Likewise, in America, Old Glory is often increasingly subservient to similar transnational currents. The appeasement to this revolutionary movement is led by the Democrats, from Presidential candidate Joe Biden to Speaker of the House Nancy Pelosi, as Democrats under President Obama transformed from a party of American left-wing to one of transnational liberalism. In the US, the protesters want to topple Jefferson, Lincoln and Washington, while unironically waving the black and red hammer and sickle standard.

None of the ongoing outrages has any factual basis either. Occasional police violence is due to individual factors and has been historically decreasing. Neither Britain nor America face anything even remotely akin to any form of systemic discrimination, much less racism which is structural. Otherwise, there won’t be a sea of migrants heading to the two most racist countries on the entire planet. There is no migration to India, Russia, or China. Systemic racism was last seen in Apartheid-era South Africa. Both in Britain and America a significant amount of minorities from East Asians to Indians are enormously successful, thereby proving that difference in social strata is often due to personal and cultural choices, instead of top-down discrimination. Both in Britain and the United States, the current set of revolutionary vanguards are almost overwhelmingly white, upper-middle-class college-educated often indoctrinated in the radical hubs in academia.

Revolutionary chaos almost inevitably leads to authoritarian retribution, whether through means of external conquest or due to the rise of a reactionary. If British and American conservatives continue genuflecting and refuse to stand up to the mob, it will not only display weakness to rival great powers (where any such disorder is forcibly quashed), but British and American people will vote reactionaries to restore order. But more than that, any country needs a common historically weaved narrative to exist. When there are hubs of radicalism entrenched in institutions churning out radicals en masse who are taught a simplistic understanding of history and are made to internalise that every aspect of their country is either irredeemably racist or patriarchal and exploitative, it results in a divisive toxic culture, rife for external interference. China is a lesser threat to the internal cohesion of the United States than the universities within America.

Refusing to kneel before the mob is therefore just a start, monitoring and defunding the hubs of radicalism is the way forward. Unless stopped with political force and legislation if necessary, this movement will be fatal for the nation-state as well as for conservatism as a political concept.

Sumantra Maitra is a doctoral researcher at the University of Nottingham, UK. His research is in great power-politics and neorealism. You can find him on Twitter @MrMaitra.