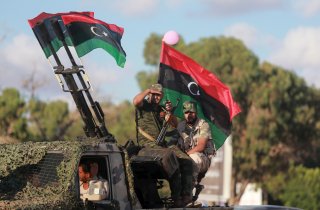 Attempting to assert his authority, Bashagha held his first official cabinet meeting in the remote city of Sebha in the south. If he cannot obtain or consolidate his position in the capital, then Libya could inch towards de facto breakdown between Tripolitania and Cyrenaica, with Russia a likely instigator. Moscow has wielded influence in the east through Haftar since the signing of a military agreement aboard a Russian ship in 2016. Russia has repaired and replenished aging military equipment and weapons from the Qaddafi era. Additional Russian kit has percolated through the quasi-official Wagner Group, which has conducted military actions on behalf of Haftar’s Libyan National Army.

Outside of Egypt, which backs Bashagha, the international community has not taken sides in the power struggle in Libya for fear of supporting the losing side. Now is the time for Washington, Paris, and Rome to get off the fence and collectively mount pressure for Dbeibah to go—as agreed. There is no guarantee that Bashagha will succeed as a unifying, transitional leader. But it is almost certain that Libya will see mounting chaos if he does not get his chance. Given the new geopolitical stakes, that is no longer a tolerable outcome for the West.

Edward P. Joseph teaches conflict management at Johns Hopkins School of Advanced International Studies. He served on the ground for a dozen years in the Balkans, including with the US Army, and as Deputy Head of the OSCE Mission in Kosovo. He is Vice-President for Government Relations of the National Council on US-Libya Relations.

Wolfgang Pusztai, a distinguished graduate of the U.S. National War College and Austria's former defense attaché to Libya (2007-12), is a security and policy analyst with a special focus on the MENA region. He chairs the advisory board of the National Council on U.S.-Libya Relations, Senior Adviser of the Austrian Institute for European and Security Policy and is a director of the California-based advisory company, Perim Associates.

Hani Shennib is the Founding President of the National Council on US-Libya Relations, and in that capacity visits Libya regularly. A leading practicing cardiovascular surgeon and international health care advisor, Dr. Shennib is on the faculty of the University of Arizona.