Like It or Not, America and Russia Need to Cooperate in Syria 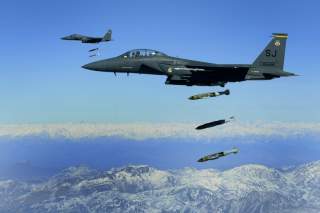 Many outside observers view the Russian military buildup in Syria as a way for President Putin to force his way through to the negotiating table with Barack Obama ahead of the UN General Assembly meeting in New York. There is some truth to that. To be effective, diplomacy should be backed by facts on the ground, and Moscow is busy creating them—in the face of mounting U.S. concerns. However, coercive diplomacy is just another form of diplomacy.

The current spike in Russia’s involvement in Syria, however, does not need to be linked solely to UNGA. Even without it, Moscow would now be sending more weapons and more instructors to Syria. As the Islamic State has expanded its control over more territory in Syria, it has posed more of a threat to the survival of the Russian-backed regime in Damascus. Thus, Moscow’s Plan A now is to help Bashar al-Assad keep his remaining strongholds; its Plan B is to help him secure the Alawite enclave around Latakia.

The Kremlin’s upping the ante in Syria is explained by its vision of IS as a threat to Russia itself, and Putin’s view of Assad as one who stands up to that threat and refuses to give up. Fighting the enemy abroad, by bolstering an ally is preferable, of course, to having to fight in the Caucasus or Central Asia. It is also important not to appear weak under pressure: in Putin’s memorable phrase, “the weak get beaten.”

The expansion of Russia’s military role in Syria has real risks. Both Russian political and military leaders and the Russian people still remember Afghanistan. The Kremlin, however, is probably calculating that the risks in Syria are manageable. Russia is sending advisers and technicians, crews to operate weapons systems, some support personnel and it may send pilots, but not combat troops: the pro-Assad fighters on the battlefield will continue to be Syrians, Iranians or Hezbollah.

Another risk is a potential collision with the United States and its allies, who have long been striking IS targets in Syria and who can also bomb Assad’s forces and potentially hit their Russian advisers. Russian weapons—and warplanes, if it comes to that—can in turn hit Western-backed Syrian opposition. Finally, Israel may not tolerate advanced weapons in the Syrian arsenal that can endanger the Jewish state’s security.

Diplomatically, the collision has already occurred: Washington is angry with Moscow’s policies. The Kremlin, for its part, likely believes that its firm stance would make the White House accept Russia as a player and negotiate with it on the following: de-conflicting of their parallel engagements or even on a division of labor as both countries execute their strategies in Syria; a broad anti-IS coalition, which Putin has proposed; and eventually the future of postwar Syria.

Moscow certainly hopes that cooperation with the United States and the West on Syria would blunt their confrontation over Ukraine, the Kremlin’s overriding concern. It is probably not a mere coincidence that since September 1, shelling in Donbass has died down, the leadership in Donetsk has been purged of recalcitrant figures and progress is expected on the issue of local elections next month. Right after UNGA, Vladimir Putin will be meeting in Paris with Chancellor Merkel, President Hollande and Ukraine’s Petro Poroshenko.

So far, Western reactions to the Russian activism in Syria has been largely negative. Emotionally, this is understandable. Moscow’s actions are clearly at odds with Washington’s policies on an issue very sensitive to the Obama administration. Russia is not asking for permission when it moves troops and borders in Ukraine, or when it ramps up military support for a regime that the United States has said needs to go. Moscow is visibly upgrading its politico-military presence in the key region of the Middle East. While doing so, Russian officials miss few opportunities to sneer at U.S. policies in Iraq, Libya, Yemen—and Syria.

Yet, in a deeper sense, Russian, U.S., European, Iranian, Saudi, Chinese and Indian interests are on the same side against an enemy that threatens all of them. Everyone agrees that IS must be defeated, even though they disagree on how to do it. The Obama administration is unlikely to fall for the Putin plan of a grand coalition with Moscow, Tehran and Damascus to accomplish that, but a degree of coordination is advisable. Alas, Syria as the world has known it for the past seventy years probably cannot be restored. It will have to be put together again in a wholly new way. This can only result from negotiations among the various Syrian players (minus IS), with the assistance of the international community, including the West and Russia.