Is It Really 'Mission Accomplished' in Iraq and Syria? 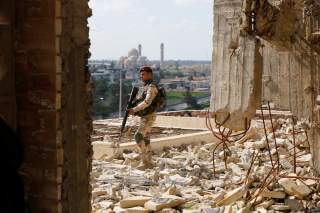 The Syrian city of Raqqa is a graphic and distressing microcosm for the broader U.S.-led war against the Islamic State. The city, captured by the Kurdish-Arab Syrian Democratic Forces this month, was the culmination of a four month campaign that included hundreds of U.S. air strikes and intense ground fighting in houses, on rooftops, streets and alleyways. The combat in Raqqa may not have reached Mosul-like proportions, but the before and after pictures from satellite footage reveals a city that is physically devastated and socially scarred. As BBC Middle East Correspondent Quentin Sommerville wrote during one of his forays in the dirt and grime, “street by street, house by house, Raqqa is being destroyed.”

This is perhaps the legacy of ISIS after all these years: wherever it goes, annihilation follows.

Indeed, this is one reason why the period after the liberation of Iraqi and Syrian cities and towns will be just as difficult as the actual fighting; there is so much ruin, so many lives lost, and so much pent-up animosity from multiple communities that it may very well take a generation for Iraq and Syria to heal—if it ever heals at all. The thirst for revenge among the Iraqi security forces, the Shia militias that Baghdad has relied on since the war began, and the ordinary people who have suffered under ISIS rule for the past four years is not a good omen for the political reconciliation that must occur if either Iraq or Syria has a shot at a decent future.

What does the future hold for ISIS? At this point, it’s very hard to say. After the capture of Mosul this summer, Hawija last month, and Raqqa weeks ago, it’s convenient to write them off as a bunch of misfit “losers” that will be co-signed to the ash heap of history - just one more terrorist group that tried to build a state and subjugate other people but were instead killed off and thrown into prison. The very same jihadists who were once proud, vicious and full of braggadocio - staring into the camera, beheading prisoners, and threatening to strike the West - are now in detention themselves, begging for mercy.

And yet if Americans have learned anything about the Middle East over the last decade and a half, it’s that the region has so many problems politically that there will come a day when the remnants of ISIS make a comeback or a new, even more extreme version of the terrorist group is established. U.S. and European counterterrorism officials expect ISIS to do exactly what Al Qaeda in Iraq did after its leadership was wiped out by a 2010 joint U.S.-Iraq raid: hide in the desert or blend into the local population; conduct suicide bombings and small-arms attacks against Iraqi and Syrian forces and anti-ISIS militia units; revert back to extorting businesses to generate revenue; and patiently waiting to exploit the inevitable sectarian fissures, incompetent governance, and economic stagnation that make ordinary people angry and desperate. We’ve seen this movie before, and it doesn’t end well.

The United States, too, will be asked to stay in Iraq and Syria to ensure that ISIS remains on the backfoot and that Iraqi troops and SDF fighters are capable enough to hold the ground they’ve liberated. Senior Pentagon officials have said that U.S. troops will be in Iraq for an undetermined period of time to assist Baghdad and prevent another massive collapse of the Iraqi army. Across the border in northern Syria, the State Department will reportedly assist the SDF in clearing the rubble in Raqqa, removing the landmines and improvised explosive devices straddling roads and buildings, and creating the conditions that would allow civilians to return to their homes.

And yet no amount of American money, training, expertise and dedication will make a difference in the grand scheme of things if the region’s political leaders—from the presidents and prime ministers in the palace and the political appointees in the ministries, down to the local civilian councils—don’t have the willpower or ability to change how they govern their people. As Iraq demonstrated between 2011–14, even $26 billion in U.S. security assistance is no match for government neglect, nepotism, corruption, abuse and sectarian rule. U.S. taxpayer money has proven to be a short-term investment that only buys a little time. It can amount to a blip on the radar if Arab politicians don’t take advantage after the conflict is over.

It may be appropriate for Washington to be involved with postconflict reconstruction and capacity building at a certain level. The Trump administration could organize an international donors conference in Washington, Brussels, or Riyadh to pony up money for Iraq and parts of Syria now free from ISIS control. After all, schools need to be rebuilt, civil servants need to be paid their full salaries, and hospitals need to be restored. The Gulf Arab states, particularly Saudi Arabia and Qatar, should match whatever financial assistance the West is able to provide.

Washington, of course, also possesses extraordinary financial leverage over the victors. The White House should be clear and unequivocal that any American resources, whether in the form of guns or butter, will be suspended—or in the most serious cases terminated—if the beneficiaries of America’s generosity use it in an inappropriate way.

But if the United States tries to play the hero by doing too much for too long, the country is almost asking for another bad investment. American bombs and dollars won’t kill every last terrorist, nor will it cleanse the region of terrorism. Groups like the Islamic State will be a player for as long as the region’s politicians, generals, ministers, soldiers, and police officers don’t get their act together and do the hard work of statebuilding themselves.

Image: A member of the Iraqi security forces stands guard as Ameen Mukdad, a Mosuli violinist who lived under ISIS's rule for two and a half years where they destroyed his musical instruments, performs at Nabi Yunus shrine in eastern Mosul, Iraq, April 19, 2017. REUTERS/ Muhammad Hamed