Is This It for Rex Tillerson? 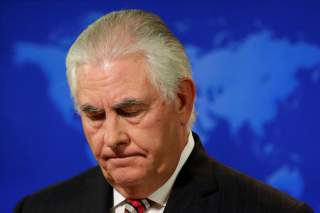 If the whispers around Washington are to be believed, Secretary of State Rex Tillerson is a marked man. Word is that the former titan of ExxonMobil could be out by Halloween. It would be a remarkable fall—the shortest tenure in modern times, the first secretary of state not to serve a full term since Lawrence Eagleburger from 1992 to 1993. The departure of administration lodestar Steve Bannon would still remain perhaps the biggest shakeup so far, but the early exodus of America’s top diplomat would be a remarkable scalp in Donald Trump’s game of personnel roulette.

John Bolton, John Kelly and Nikki Haley are possible replacements. Kelly’s nomination would likely sail through and relieve Trump of a chief of staff who has tried to lock down the White House. Haley’s neocon bona fides would be a plus. Bolton’s nomination, however, would risk an embarrassing failure in the Senate.

But there remains little question that Tillerson’s relationship with the president has deteriorated. The native Texan who rose from little to command one of the most disciplined corporations in the world is seen as just not respecting Trump. “I think it’s put Rex into personal conflict with the president,” one former ExxonMobil executive who worked extensively overseas with Tillerson told me. Tillerson deeply values process—“lives and dies” by it. It is the way of life for most senior Exxon brass, this former executive explained to me.

The president, on the other hand, seems to value chaos in its own right. “He probably doesn’t like Trump one bit. Because it goes against his values to like to somebody like him … But he’s a patriot and he’ll probably stay there as long as he can. But if the president starts undercutting him like he was doing with [Attorney General Jeff] Sessions … I think he would really struggle between fulfilling his patriotic duty and saying ‘I have become ineffective because my boss has compromised me.’”

Not knowing if he’s going to be out one day versus the next is kryptonite for the orderly, deliberative career businessman and engineer. It is also difficult for hammering down policy. Similar laments have been heard from the likes of Bannon, who put it diplomatically, but bluntly, in comments to The Weekly Standard last month. “The Trump presidency that we fought for, and won, is over. It’ll be something else. And there’ll be all kinds of fights, and there’ll be good days and bad days.” While Tillerson, who once backed Jeb Bush, is likely shedding few tears for national-populism, the volatile atmosphere in the White House is a source of bewilderment. Tillerson’s focus as secretary is reforming the organization internally, bringing it in line with practices he was both trained under and continued to implement at Exxon. But the endeavour is obviously futile if he’s not long for Washington.

How did it come to this? Some of Tillerson’s moves have been misunderstood. His efforts to change the State Department mission statement by scrubbing democracy promotion have met with perturbation among the diplomatic and journalistic elite. His efforts to cut down on bureaucratic fat and the number of special envoys have met with a similar outcry. “If the Trump team, Tillerson included, could see human rights advocacy as a strategic asset, rather than a liability, the United States could strengthen its hand diplomatically and maybe even alleviate the suffering of millions of innocent people,” the Washington Post’s Josh Rogin wrote in August.

But for some in and around the State Department, the special envoy positions are often an open joke. “They can be good for keeping pressure on certain issues and bypassing the bureaucracy and inertia, and to an extent, the politics of the embassy or regional bureau. But they are often duplicative and aimless,” says one specialist who works with the department in East Africa. Duplication is a central pet peeve for Tillerson, says the former executive. “Honestly, I don’t think it matters much either way. Especially since core staff and functions are being retained. Just shuffled,” says the specialist.

There are, of course, significant drawbacks to Tillersonism. The former executive who spoke to me spent the first part of his career at Mobil, before it merged with Exxon in the late 1990s. At Mobil, this person never met an internal auditor, and an “entrepreneurial” spirit and ends-oriented approach were emphasized. At Exxon, executives and their portfolios were audited every two to three years, and the general word around the company was that things should be done the Exxon way, and the ends would be assured.

The executive speaks warmly of this approach, considering Tillerson and his predecessor, the legendary Lee Raymond, as clear “value-added.” Raymond, who unlike Tillerson is a “cold” person, was revered and feared throughout the company, and he was commonly referred to only as “The Brain.” His successor and protege Tillerson continued to keep the existing culture largely in place. While that culture allowed huge headway to be made in some areas—particularly safety, a core concern after Exxon Valdez—it also sometimes had its excesses.

The former executive recalls one incident where a fellow employee had her car break down on the side of the road. The only form of payment she happened to have on her was a company credit card. After using it for a personal reason in this situation (and paying the company back), she sought to explain her decision to Exxon brass as the clear product of exceptional circumstances. She was terminated.

In the coming days and weeks, it’s now Tillerson who is seeking to avoid such a fate.