It Is Time to End the Longest War in U.S. History 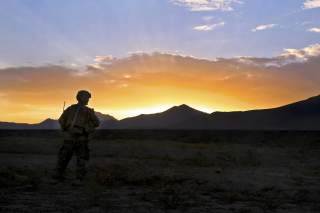 Negotiations resumed between the Taliban and the United States last week, as both sides edge closer to a ceasefire. Reports of substantial progress emerged over the weekend, as the parties work towards a timetable for the departure of American troops from Afghanistan—an issue that has stalled previous negotiations. American officials also continue to press for a Taliban pledge that the group will not allow the country to be used by terrorist groups, including Al Qaeda and the Islamic State, to harm the United States.

Agreement on these two issues should pave the way for an end to the longest war in our history. The largest obstacle to peace, however, might be Washington’s foreign policy establishment.

On Afghanistan, this crowd is split into two camps. First is the “remain” group. Retired Gen. Stanley McChrystal, a former commander of NATO forces in Afghanistan, belongs here. In December, he advised Secretary of State Mike Pompeo that the best way forward might be to “just muddle along.” McChrystal is not the only one light on ideas. A month later, Richard Haas, president of the Council on Foreign Relations—the foreign policy establishment’s high church—published what he described as, “not a strategy for winning, but rather one for not losing.”

Eighteen years after 9/11, this perspective rightfully finds its influence diminished. “Muddling along” is madness, not pragmatism. No American family should have to sacrifice a son or daughter for such a plan. Taxpayers should not be asked to continue to bankroll such a bankrupt strategy.

The “leave, but not yet” group, then, is far more influential today in Washington. For an example, we can look to Anne-Marie Slaughter, a former State Department official who worked directly for Secretary of State Hillary Clinton. Now a think tank CEO, Slaughter argues that a peace agreement lacking guarantees regarding the rights of Afghan women is “not worth having.” A recent article in Foreign Affairs—another organ of the establishment—reaches a similar conclusion using a different angle, contending that “opium containment is not a detail to be left out of U.S. negotiations with the Taliban.”

Slaughter argues that the progress of Afghan women is essential to the development of the country as whole. While true, this sidesteps the unfortunate fact that we have spent two decades demonstrating the futility of changing Afghan culture at gunpoint. As the wife of American chief negotiator Zalmay Khalilzad points out, Afghan feminists, not American politicians, need to lead on social issues. Slaughter also argues for giving Afghan women a seat at the negotiating table, which is also worth doing. But to a clear-eyed strategist, both arguments are simply irrelevant. What is true now has been the case for years: U.S. military intervention cannot accomplish this sort of cultural and political victory.

Opium containment is another impractical suggestion. The Foreign Affairs authors argue that without it, Afghanistan will once again become a terrorist safe haven, and suggest that Washington demand that the Taliban prioritize “counter-narcotics operations” in the territory it controls as a condition for peace.

It is hard to envision the Taliban accomplishing such a task, even if its leadership stopped bickering among itself long enough to take it seriously. With more than one hundred thousand troops in Afghanistan, NATO forces never attempted to eradicate the crop that underpins much of the rural Afghan economy. Could the Taliban really do better? The drug trade is certainly a pernicious influence, but the assertion that it will lead to the resurgence of terrorism is incompatible with the reality that for many years the CIA’s most effective counterterrorism efforts depended on notorious drug dealers like Ahmed Wali Karzai, the brother of the former Afghan president.

These proposed conditions appear benign. It’s hard to argue against a more equal Afghan society or an Afghan economy not dependent on opium production. In truth, however, these ideas are more of the unrealistic hubris that our foreign policy establishment has produced for two decades. They confuse outcomes that are desirable with those that are necessary and can be delivered by American military intervention. The results of such unachievable objectives are mission creep and its stepchild, endless war.

A glimpse at the battlefield situation reveals weakness, not strength, in the American negotiating position. The Afghan army continues to suffer unsustainable losses. Despite U.S. investments in governance, Afghanistan ranks among the ten most corrupt countries in the world. The Pentagon admitted last week that it has stopped tracking the amount of Afghan territory controlled by militants.

Here at home, attitudes toward the war range from incredulity to exhaustion. The president is openly skeptical, and, though it may come as a surprise to many in Washington, the majority of Americans are too. Tolerance for the conflict has eroded even in historically supportive constituencies; in a recent poll, 60 percent of military veterans said they would support a total withdrawal from Afghanistan.

Misguided suggestions meant to create “a stronger peace” distract from what should be the core objective of ending decades of violence. That they come from the Washington elite should not be surprising. After all, these are the same institutions that sold us bumper sticker slogans in lieu of strategy: “hearts and minds,” “government in a box,” and “clear, hold, build.”

Now, more than ever, we need a realistic approach to ending our involvement in Afghanistan. American soldiers, no matter their bravery and skill, cannot win this war. The only core U.S. interest worth any sort of sacrifice is the denial of sanctuary to anti-American terrorist groups. A better, more just Afghanistan is something that the Afghans will have to create.

Sam Long served as an infantry officer in the U.S. Marine Corps from 2009–2015, deploying to Afghanistan, the Republic of Georgia, South Korea and Okinawa.