Is It Time to Get Tough With Russia? 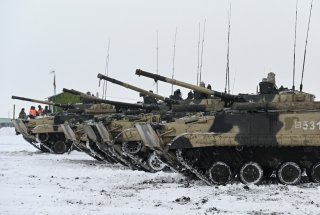 While Biden said that a limited Russian incursion into Ukraine would essentially produce a debate among NATO members over how to respond, Putin has defined the agenda by moving large forces and military equipment from as far away as the Russian border with North Korea to confront Ukraine. Secretary of State Antony Blinken clarified the president’s words to bolster deterrence, saying: “We are doing everything possible to make clear to Russia that there will be…a swift, severe, and united response to any form of aggression by Russia directed toward Ukraine.” Even as the United States is hoping to deter, now with threats of sanctions and potential deployments to Europe, Putin acts to compel and force a response to his objectives.

Meanwhile, the world waits to see what Putin will do while he makes Russia the center of attention. He was not always so keen to confront openly. When Putin seized Crimea from Ukraine in March 2014, he did it under the cloak of deniability of men with no insignia quietly taking advantage of the disarray in Ukrainian politics. Now, Putin is encircling Ukraine in full view of the world, at a time when Ukraine is focused and its military is in far better shape than it was in 2014. The Kremlin brazenly threatens the liberal global order with war and simultaneously claims it is the West, not Moscow that is intransigent.

How did we get here? Well before Crimea, Putin harbored resentment over what he saw as Western humiliation of a weakened Russia in the 1990s and a desire to undo it. His perception of Western weakness has made him increasingly confident, particularly as he sees our collective risk aversion. For understandable reasons, we favor dialogue to confrontation. Putin does as well, but he chooses to shape it by using coercion in advance.

The Biden administration has wisely made it clear that it will not meet Putin’s public demands of allowing Russia to determine who can be a member of NATO or which states can have Western military support, and, in Blinken’s words, is threatening “severe” consequences if Russia invades Ukraine. At the same time, it is offering to engage in dialogue on what may be parallel Russian and European security concerns.

Maybe this will work, and Putin will seize on the United States’ readiness to speak about missile deployments and exercises as a way of claiming success and walking back his threats. The problem is that so long as he sees risk aversion as opposed to risk readiness guiding U.S. policies, he is going to continue his coercive approach more generally. This is not of recent vintage and administrations of both parties have acted in a way that has persuaded Putin of U.S. weakness. Indeed, the way the United States withdrew from Afghanistan only reinforced a series of limited American responses to his war in Georgia (and continuing presence in Abkhazia); his seizure of Crimea; his promotion of conflict in eastern Ukraine, including our initial reluctance to provide weapons to Ukraine and, once they were provided, then not permitting them to be deployed; his military intervention in Syria, repeated broken promises to us on defusing that conflict, and his enabling the war crimes of the Assad regime. Add to these our not acting on our red-line in Syria, and our infrequent and highly circumscribed responses to Shia-militia attacks against our forces and presence in Iraq and Syria. True, the killing of Iranian Qods Force commander Qasem Soleimani seemingly sent a different message, but it was clearly a one-off action.

To be fair, each of these decisions made by different administrations may have been logical and reasonable in isolation but cumulatively they persuaded Putin that he has little to fear from engaging in coercion and potentially much to gain. In the case of his coercive posture toward Ukraine, it isn’t only determining what will be permissible for Ukraine but signaling internationally that he is now defining the rules of the game globally.

When it comes to Ukraine, there is irony: for all the scary bluster, it is unlikely that Putin wants a full-blown conventional war with Ukraine. The Russian people are far more casualty-averse than in the past, and a full-blown war will be costly in both blood and treasure. Putin likely knows that Ukrainians will fight with all they have. Even with a Russian knife to their throats, they are choosing the West. (Unfortunately, none of this precludes his grabbing a strategic chunk of Ukraine by cutting off its access to the Black Sea or carving out a corridor to Kaliningrad, or formally annexing Donbas.)

Ultimately, if we want Putin to act differently, we, too, must demonstrate less risk aversion. Putin watches our behavior everywhere, not just in Europe. Yes, we should initiate discussions on having Sweden and Finland join NATO and rotate more forces into Poland and Lithuania. But maybe also it is time to respond more forcefully to threats against our forces in Syria and Iraq. Maybe we should make clear to the Iranians that if they are not willing to talk directly with us in Vienna, the negotiations will cease, and we will prepare alternative options to respond if they do not halt the continuing advance of their nuclear program—options that will put that program in jeopardy. And, maybe at a time when Ukrainian use of Turkish drones alarmed the Russians, this is a time to see what more we can do with Turkey.

Some will argue that these actions could increase the risk of conflict—and they would be right. With Putin, regrettably, that is the point.

Anna Borshchevskaya is a senior fellow at the Washington Institute for Near East Policy focusing on Russia’s policy towards the Middle East and author of a recent book, Putin’s War in Syria: Russian Foreign Policy and the Price of America’s Absence.