Has India Arrived at Real Strategic Parity with China? 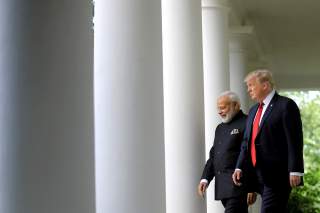 For three decades, descriptions of India’s strategic utility to the United States have stressed latent potential rather than existing geopolitical fact. But a new phase of Asian power-balancing is on offer, explicit in Secretary of State Rex Tillerson’s October 18 speech at the Center for Strategic and International Studies ahead of his meetings in Delhi this week.

India’s willingness to play an overt balance of power game in Asia will depend in large part on these three issues:

- America’s coherence and staying power in Asia. Will India’s doubts about U.S. sure-footedness in Asia, as well as in the Indian subcontinent, prevent full maturation of Tillerson’s implicit quasi-alliance?

- Afghanistan. Given the decision to prolong current futility in Afghanistan, how much will even a minimal Pakistani cooperation in that effort frustrate the broader convergence on offer? More specifically, will India consent to play by the American “economic aid only” playbook for Afghanistan?

Tillerson’s October 18 speech both advanced recurrent themes from previous U.S. administrations and added new elements, including quite explicit and invidious comparisons to China, India’s geopolitical rival of choice. He specifically included rapacious foreign financing and investment by China, and criticized its refusal to play by international norms.

His curtain-raiser made only a brief, pro forma reference to Pakistan’s much reduced place in the American universe. In a single line, Tillerson mentioned Islamabad’s “importance” but in the negative sense, citing its failure to get its house in order—a scarcely concealed barb about Pakistani connivance in terrorism.

None of this is new. But it is more explicit. This contrast between India and Pakistan mirrors the distinction, going right back to the Bill Clinton era, between “opportunity” (India) and “problem” (Pakistan). This imbalance in perspective has now become so great a full rhetorical decoupling of U.S. policy (from the “evenhandedness” which for many years extended a type of parity to the two subcontinental nuclear powers) cannot be far off.

The underlying rationale for early moves towards American rapprochement with India in the 1990s always envisaged a time when India would attain a type of parity in the pan-Asia balance of power. Tillerson’s speech signals that this time is now at hand: gradually, the widening success of India’s liberalizing economy and, more recently, its sharpening divide with China (Tillerson tellingly avoided mentioning the recent Sino-Indian Himalayan border standoff) has made for a steadily more comfortable strategic “fit” for both the United States and India.

Deepened Indo-U.S. engagement, though often fitful and beset by squabbling, now rests unambiguously on India’s strategic utility vis-à-vis the Chinese. Can India live with that description?

Tillerson’s vision basically rests on the expectation of a more equally weighted U.S./China/India power triangle in future. Since the 1990s, and despite ever closer alignment of many Indian and American objectives, a supervening common interest has remained only latent, and never closed the divide.

Can it do so now? Is China the all-purpose unifying force? Over the last two decades, the Indo-U.S. relationship has oscillated between moments of enormous expectation and mutual disenchantment. This happens in the commercial realm (market entry, intellectual property protection), defense and defense sales, and divergent diplomatic goals. Even in their respective foreign relationships, wide differences persist.

Despite the big concept speech, rigidities in both Indian and American policy—as well as in the often sluggish history of the rapprochement itself—suggest a mere continuation of the slow pace of policy convergence.

Unless, that is, if China steps into a position of unambiguous enmity with both Washington and Delhi.

Some in both capitals think this is the emerging reality. China’s moves in South Asia unequivocally aim at keeping India off-balance, rhetorically at least making preparations for a grudge rematch of the two countries’ 1962 border war. The same destabilizing intent characterizes Chinese moves in the western Pacific.

Beyond that, and as the Chinese leadership itself points out, the United States seems intent on “self-isolating” itself in Asia. Already diminished in a multipolar world, American stature in Asia had slipped even before recent decisions such as withdrawing from the TPP.

From India’s point of view, the recent alpine stand-off between Indian and Chinese mountain troops typifies Beijing’s underlying and relentless assertiveness. For Delhi—as much as for the United States—maintaining a multipolar Asia requires quiet management of secondary relationships. Those with and between Australia, India and Japan in particular serve to buttress Asia’s power balance.

Will the clarity of this picture also fade, as earlier bouts of bilateral Indo-U.S. optimism have faded periodically since the 1990s? The answer is “probably not.” The balancing-China “logic” impelling a tighter convergence of U.S./India interests could succumb to recurrent hesitations on both sides, even with persistent Chinese assertiveness.

The key to maintaining forward movement (and in avoiding unrealistic expectations) lies in understanding the cyclical pattern of U.S./India rapprochement over the past quarter century.

Ironically, the best hope for a quasi-alliance based on strong overlapping interests lies in Delhi’s full understanding of the implications flowing from the relative decline of previously unquestioned U.S. ascendance in Asia. Despite inevitable setbacks, the “convergence” will thrive in a multi-polar world in which balancing power becomes the key determinant. Even a successful positioning of Pakistan as center stage logistician for the forever war in Afghanistan cannot impede this logic.

Francesca Silvestri is a PhD candidate at the University of Nottingham. Her thesis has focused on U.S.-India rapprochement since 1989. James Clad was U.S. deputy assistant secretary of defense for Asia Pacific Affairs during 2007-09.