It Won't Be Easy for Trump to Fire Sessions 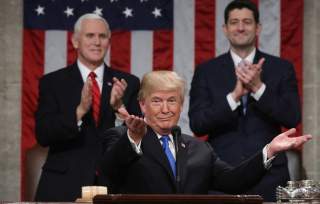 Here’s a line that jumped out at me from a recent news story about President Trump’s efforts to build Senate support for firing Attorney General Jeff Sessions.

“Though they once cautioned him that dismissing Sessions would feed special counsel Robert Mueller’s investigation of Trump’s potential obstruction of justice, these people say, Trump’s legal team has become increasingly convinced Mueller will make that case regardless of whether the president fires Sessions or leaves him in place,” Politico reported.

If true, that doesn’t bode well for Trump avoiding impeachment proceedings next year. Democrats are highly likely, if still not quite certain, to retake the House in the November elections. Any presidential wrongdoing reported by Mueller would make it extremely difficult for Democratic leaders to keep the lid on impeachment talk—and that’s assuming the current cautious leadership team remains in place.

If the elusive “blue wave” comes to fruition, it could also wash away Nancy Pelosi and allow a progressive more in the thrall of the Resistance—and without any institutional memory of how impeachment backfired on Republicans in 1998—to surf toward the speakership. Either way, Democrats will be in control of the chamber they need to advance articles of impeachment and initiate the process of removing the president from office.

At that point, it really comes down to Senate Republicans. It is quite possible they will retain, even expand, their majority in November given the favorable map. Several states where Trump remains popular have vulnerable Democratic incumbents running for reelection. Trump loyalists could replace Trump critics like Jeff Flake, Bob Corker and the late John McCain (though Orrin Hatch will be swapped out for Mitt Romney).

But even if the Democrats retake the Senate, Republicans will retain the votes to block a conviction and keep Trump in office. A 55-45 Democratic Senate—inconceivable under the current map—would still require 12 Republicans to vote to remove Trump.

How Senate Republicans feel about Trump at that point will determine whether his presidency continues. That’s why the initial Trump/Rudy Giuliani strategy of discrediting Mueller—and raising valid questions about the pre-Mueller FBI investigation of Trump-Russia, during which some dubious decisions were made—made so much sense.

The more questions they raised about the investigation, the higher burden of proof Republicans were going to demand. This is similar to Bill Clinton’s counterattacks against Ken Starr before his own impeachment and Senate trial.

Over time, Trump has built up a constituency among conservatives in the House for firing Sessions and even shuttering the Mueller probe. We are starting to hear the first rumblings that he is winning converts on Sessions in the Senate, though that is partly because some Republicans have disagreements with the attorney general on other, unrelated issues. We’re not at the point where there would be much Senate GOP support for hampering Mueller—yet.

At the same time, from trade policy to pushing out White House counsel Don McGahn—an unsung hero of the conservative judicial revolution that ranks among the president’s top accomplishments—Trump is doing plenty of things Republicans don’t like. This includes his poor behavior in the aftermath of McCain’s death.

Maybe they will acquiesce, as they are beginning to on Sessions. But once the midterm elections are over, there will also be a brief end to the imperative of pre-election party unity (though it will return in time for the 2020 election cycle). If those elections are a disaster, unfolding amid new Paul Manafort convictions and a steady drip of Michael Cohen revelations, perhaps GOP senators' patience will start to wear thin, and they'll want to kick the tires on Vice President Mike Pence.

It also merits watching whether the Trump tariffs and the foreign retaliation they bring about begin to eat into the economic growth that remains the Republicans’ biggest asset. Trump with a good economy is stuck in approval ratings in the 40s. What happens to Trump in a bad economy?

On the other hand, if the Senate majority grows it will be in no small part because Trump played nice with Republicans in that chamber and stopped pushing inept populist candidates on the primary electorate. Mueller is still far removed from alleging, much less proving, any collusion with Russia, even though Trump’s own behavior inspires little confidence that this will necessarily remain the case.